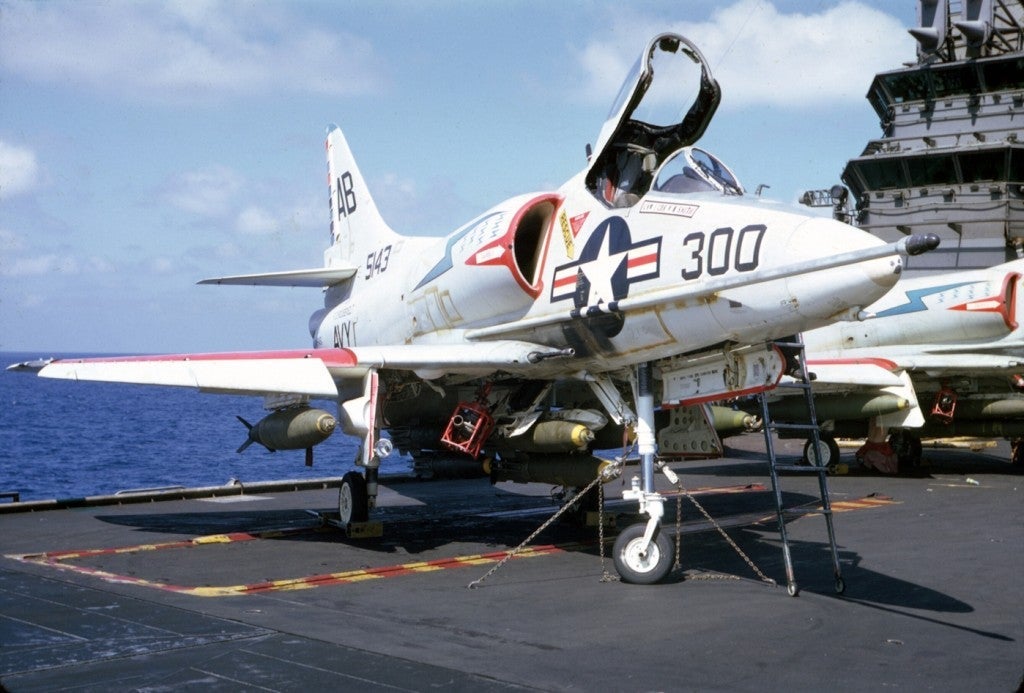 The military makes a big deal out of when a rifle goes missing, not to mention when a nuke disappears. In spite of the fact the program is designed to be “zero defect,” here are 7 examples of doomsday devices wandering off (including a few where they never came back):

The first story on the list is also one of the most mysterious since no signs of the wreckage, weapons, or crew have ever been found. A B-47 Stratojet with two nuclear weapons took off from MacDill Air Force Base, Florida on March 10, 1956 headed to Morocco. It was scheduled for two midair refuelings but failed to appear for the second. An international search team found nothing. The U.S. military eventually called off the search.

On February 5, 1958 B-47 bombers left Florida with nuclear weapons on a training mission simulating the bombing of a Russian city and the evasion of interceptors afterwards. Over the coast of Georgia a bomber and interceptor collided. The interceptor pilot ejected, and the bomber crew attempted to land with the bomb but failed. They jettisoned the bomb over the ocean before landing safely. Since the plutonium pits were changed for lead pits used during training, the missing bomb has only a subcritical mass of uranium-235 and cannot cause a nuclear detonation.

On January 24, 1961, a B-52 carrying two Mark 39 bombs, each 253 times as strong as the Little Boy bomb that dropped on Hiroshima, broke apart in a storm and dropped both of its bombs. One survivor of the crash, the pilot, was able to alert the Air Force to the incident. The first bomb was found hanging by a parachute from a tree, standing with the nose of the weapon against the ground. It had gone through six of the seven necessary steps to detonate. Luckily, it’s safe/arm switch, known for failing, had stayed in the proper position and the bomb landed safely. “You might now have a very large Bay of North Carolina if that thing had gone off,” Jack Revelle, who was in charge of locating and removing the weapons, said. The other bomb’s switch did move to the “Arm” position but, for reasons no one knows, it still failed to detonate, saving tens of thousands of lives.

A Navy A-4 Skyhawk was being moved aboard the USS Ticonderoga during a military exercise December 5, 1965 when it rolled off its elevator with a pilot and a B43 nuclear weapon loaded. The plane sank quickly into waters 16,000 feet deep. The status of the weapon is still unknown. The pressures at that depth may be enough to detonate the weapon and the waters were so deep that it would’ve been hard to detect. If the weapon is still intact, it would be nearly impossible to find as very few vessels can make it down that far.

On January 17, 1966 a B-52 was approaching a KC-135 for refueling when the bomber struck the tanker, igniting a fireball that killed the crew of the KC-135 and three men on the B-52. The plane and its four B28 thermonuclear bombs fell near a small fishing village in Spain, Palomares. Three were recovered in the first 24 hours after the crash. One had landed safely while two had experienced detonations of their conventional explosives. The explosions ignited and scattered the plutonium in the missiles, contaminating two square kilometers. The fourth bomb was sighted plunging into the ocean by a fisherman. Despite the eyewitness account, it took the Navy nearly 100 days to locate and retrieve the weapon.

Like the Palomares crash, the January 21 crash of a B-52 resulted in four B28 bombs being released. This time it was over Greenland and at least three of the bombs broke apart. Investigators recovered most of these components before realizing they had found nothing of the fourth bomb. A blackened patch of ice was identified with parachute shroud lines frozen within it. Recovery crew speculated that either the primary or secondary stage of the bomb began burning after the crash and melted the ice. The rest of the bomb then plunged through the Arctic water and sank. The weapon is still missing, presumed irrecoverable.

The USS Scorpion, a nuclear-powered attack submarine, was declared presumed lost on June 5, 1968. The loss was especially troubling for the Navy since the boat had been following a Russian research group just before its disappearance. At the time it was lost, the Scorpion was carrying two Mark 45 antisubmarine torpedoes (ASTOR). The wreckage would not be found until October 1968. The USS Scorpion is still on the floor of the Atlantic under 3,000 meters of water and the cause of the sinking remains unknown. The torpedo room appears to be intact with the two nuclear torpedoes in position, but the Navy can’t tell for sure. Recovery of the torpedoes would be extremely challenging, so the Navy monitors radiation levels in the area instead. So far, there has been no signs of leakage from torpedoes or the reactor.