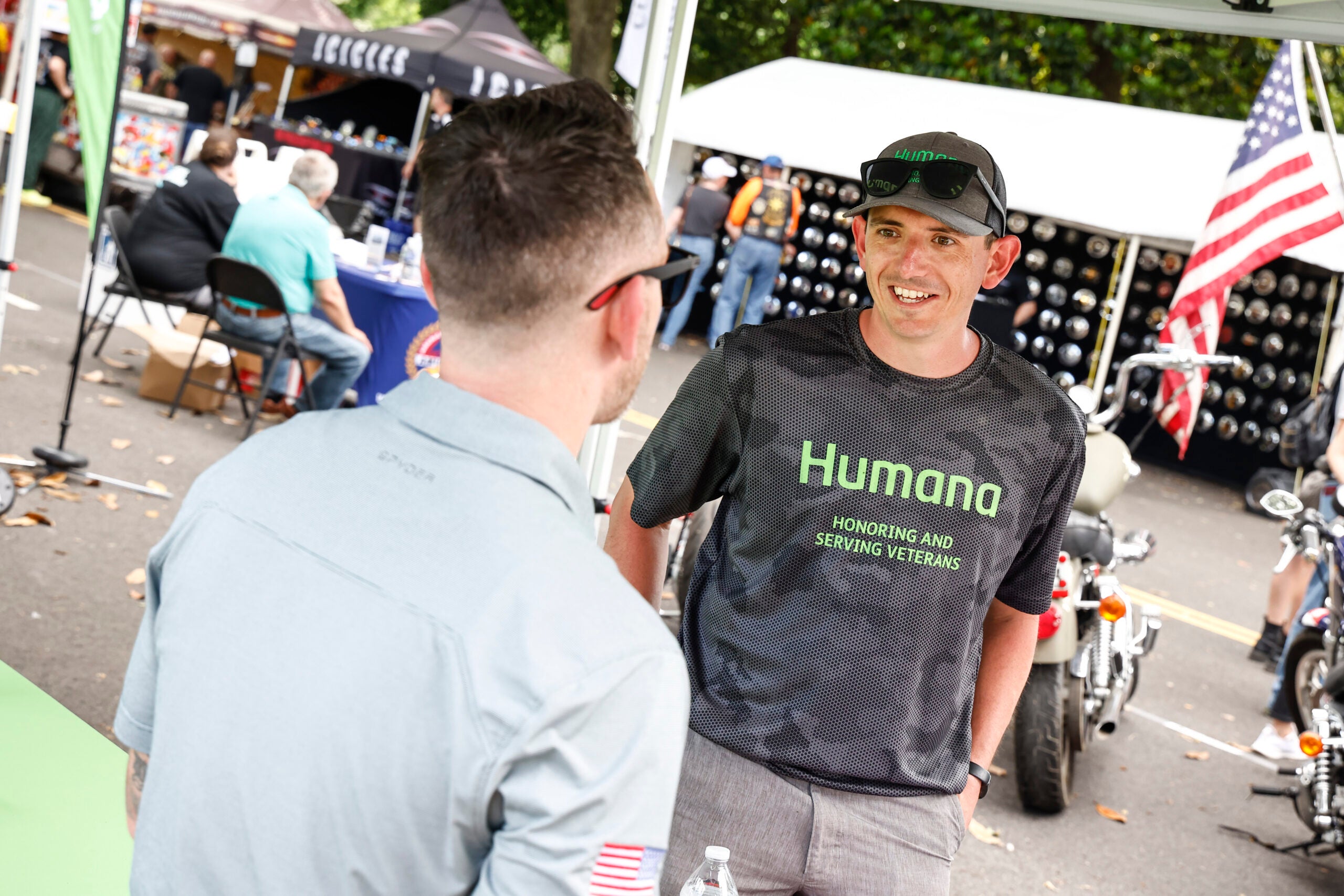 Humana associates assist Veterans at the company booth in Thunder Alley on Saturday, May 28, 2022 in Washington D.C. (Paul Morigi/AP Images for Humana, Inc.).

In 2011, Humana launched its Veterans Hiring Initiative. Within the next decade, the health insurance company not only hired more than 6,100 veterans and military spouses, it implemented a series of Veteran-oriented programs and policies that increased job satisfaction for its military-connected employees.

In both 2020 and 2021, its dedication to those employees earned it the title of the top “Military Friendly Employer” in the large company category by Victory Media. Aaron McCoy, an Army veteran of the Iraq War, has grown with the company since first starting as a Humana sales agent in 2013.

He found out about Humana’s dedication to the veteran community almost immediately and found veteran connections almost everywhere he turned.

“It’s kind of funny,” McCoy says. “My first leader at Humana was an Air Force veteran. My second leader was a major in the Marine Corps Reserve, and then my most recent leader was a retired colonel.”

By the time he arrived at Humana, McCoy had left active duty and was serving in the National Guard. He didn’t have to deploy, but the company’s policies toward his service weren’t just accommodating, he found real support there.

“I had things that would pop up sometimes, that would require me to be away or forced me to leave work early. I never had an issue,” McCoy recalls. “I remember we had many associates that were away on deployments for 12 to 18 months. We always had the support we needed. They would even supplement your Guard pay so you didn’t lose money. They’ve always been great.”

The connections he found at Humana led him to its Veterans Channel, where he is a regional executive today. Humana’s Veterans Channel builds relationships with veteran service organizations (VSO) such as the VFW and AMVETS to improve the lives and wellbeing of communities.

Through its Veterans Channel, Humana launched the Veteran Bold Goal population health initiative to address the special needs of the community while tackling health-related social problems for veterans.

“We are a Medicare company, so we want to be there to help support and answer questions and educate as it relates to Medicare,” McCoy says. “But we really are looking to find ways to support efforts to address any needs or issues the veteran community might face.”

To this end, the company partnered with the VFW to support the VSO’s Unmet Needs program, which helps veterans take care of basic needs such as rent and utility payments and supported VFW programs that help veterans file their claims with the Department of Veterans Affairs. In 2018, Humana also teamed up with the VFW and Feeding America to launch the Uniting to Combat Hunger campaign, which has since raised the equivalent of over 3.5 million meals to distribute in local communities with veteran populations.

Humana’s social efforts led to Disabled American Veterans (DAV) naming it both the 2022 Partner of the Year and a Champion for Heroes. In 2022, the company also announced its support for AMVETS HEAL program, which assists veterans with medical needs and access to quality healthcare, including mental health and specialized services.

“We have thousands and thousands of agents across the country to make sure they understand the specific needs of veterans,” says McCoy. “We want to understand how VA healthcare works for vets, how TRICARE works for retirees, how CHAMPVA works for spouses, and how all those things might interact or impact their Medicare coverage so that we’re doing the right things for those folks.”

The military-veteran community faces a host of social problems, some of which might surprise even veteran supporters. Food insecurity is a real issue, along with social isolation, suicide and homelessness. Tackling these pervasive social issues might seem like a PR stunt for a corporation, but Humana’s dedication to addressing them is real. It’s one of the reasons McCoy believes the work he does there is so important.

“It’s a community that I’m obviously a part of and really familiar with. I like being around other veterans and that’s great,” he says. “But to help them gain access to benefits, veteran-specific or not, that’s really rewarding. Supporting these organizations helps us support the work they do. Creating opportunities to help is having a direct impact on veterans and their families across the country. It’s just a feel-good type of work that I don’t think most people get to do for a living.”