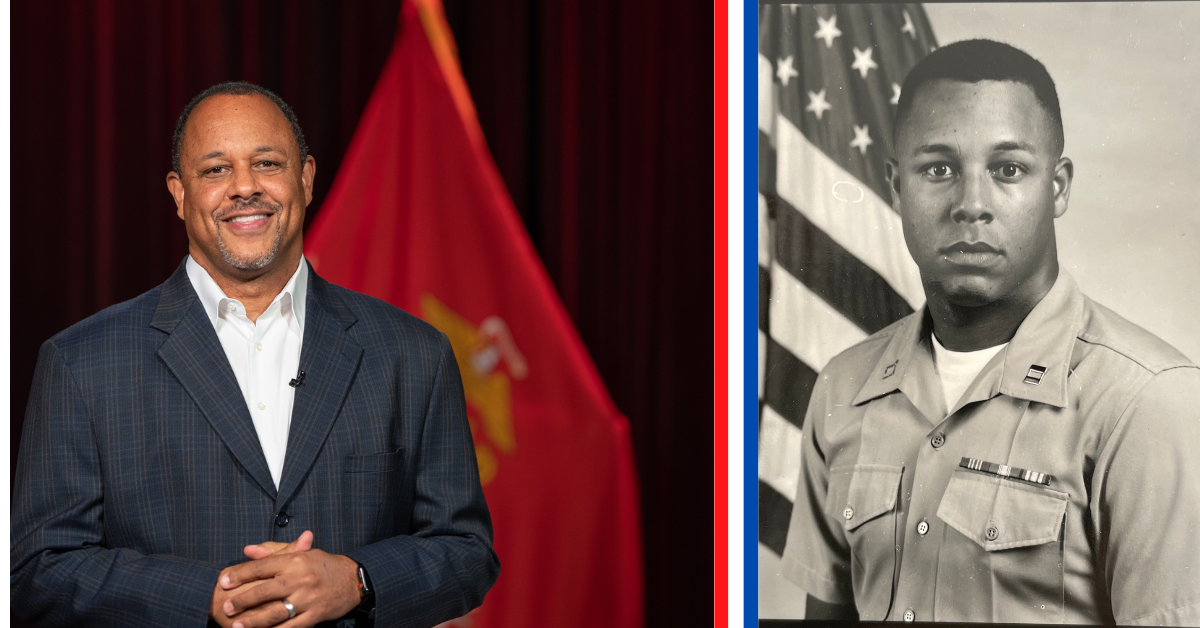 Growing up outside of Arlington Cemetery always filled Tony Wells with awe, respect and an urge to serve. But it was his grandfather’s service during World War II that would solidify it.

“My grandfather served in the Navy as a steward and driver for senior leadership during World War II,” Wells explained. In those days, persons of color weren’t allowed to hold many positions outside of the kitchen or mess deck and they absolutely weren’t able to become officers.

“When I ended up getting accepted to the Naval Academy it was a super proud moment for him. Watching his grandson become a Marine Corps officer wasn’t something he could ever imagine happening,” he said.

During his rotation as a cadet, being at Quantico led him to the realization that he wanted to be a Marine. “It was really what I saw from Marine officers. How they looked out after their Marines and how they cared for them,” Wells shared. “After that at its core it was the discipline, attention to detail and just the high, high standards that were expected.”

He was commissioned as a 2nd Lieutenant in May of 1986. Though Wells would be a part of the Gulf War and ultimately get out in 1991, it wasn’t the hardest part of his time in service.

“I was at the mountain warfare training center in June of ‘87. We had a training accident and some Marines were killed. We had gone to climb Mount Whitney and when we descended down and got in the bus to go back to the camp, the bus breaks failed and the bus went off the side of the mountain. We were way up on the mountain when it happened,” he said. “The Marine behind me was a young lieutenant named Hans Webber, who had been through both the basic school and the infantry officers course with me. We knew each other fairly well and he was literally in the seat behind me and didn’t survive. I think, for me, that training accident informed for me the stakes that are at play.”

Though much has been studied and written about regarding losses suffered at war, the United States has now lost more service members to training accidents and suicide post 9/11.

During his last two years in the corps, he was given a second MOS aside from being an infantry officer. He chose public affairs. “That served as a good transition for me out of the Marine Corps and I was very fortunate to join Nissan Motor Corporation in their corporate communications department,” Wells said. “My first four plus years out of the service was in corporate communications.”

The position would lead him to a distinguished career across 10 brands, including USAA, where he was the Chief Brand Officer.

Today, he’s the SVP of Marketing for Verizon. Wells is proud of Verizon’s commitment to serving the military community. From forming resource groups within the company to giving back to organizations who support, it’s the whole package for him. “It’s recruiting, making sure we retain veterans. It’s supporting the veteran community, the spouses, especially because they play a significant role,” he said. “I think we have one of the more robust and complementary and sophisticated kinds of veteran resource groups that reside in corporate America.”

Wells remembers struggling at times with ensuring that his work felt purposeful after leaving the Marine Corps. “It’s something often hard to find. My advice to veterans would be to really, in advance, start to think about their exit strategy about what they want to do next,” he explained. “In terms of the type of job but I also think the type of company and the type of people that work there are super important to really spend time because every company has a different culture.”

Another passion for him is ensuring diversity and inclusion are always on the agenda for future generations of those in service. And, working together.

“The area of diversity, equity and inclusion, especially as it relates to our veteran communities, is important to me. I think it’s so important that the military reflects America in terms of its composition and its support. I believe we’ve made some significant progress recently on addressing some of those issues,” Wells stated. “I’m a big supporter of the veteran community…we’re relying on each other, supporting each other and advocating for each other. It’s vital.”

You can learn more about Tony Wells and what makes him MIGHTY by clicking here.