9 military phrases that differ between the USMC and the Army 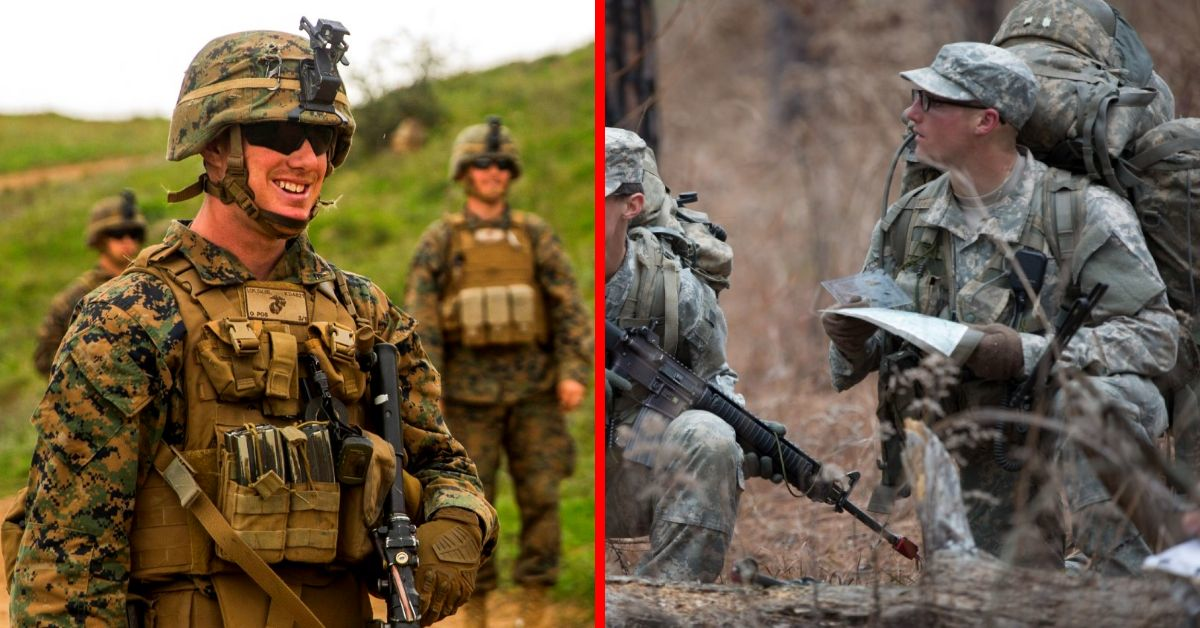 The Army and the Marine Corps share words for military slang on a daily basis. There are just some things that stick out like a sore thumb that rub each branch the wrong way – like saluting indoors is wrong in the Corps but normal in the Army. Along with other things that go against nature, the Army has different jargon that always makes Marines raise an eyebrow whenever they hear them. Here are the 9 most common military phrases that differ between the Marine Corps and the Army.

The Head and the Latrine both mean the bathroom. You can always tell the difference between one veteran or another by the word they use to go when nature calls. Motivators are known to still use the phrases long after their service has ended.

A fighting hole is an underground defensive structure used by a platoon sized element or greater to provide cover and concealment. A fighting hole can be shallow, just deep enough to fit a troop in the prone or a full sized rectangle with grenade pits, chair like steps, room for your gear and designated left/right lateral limits of fire. The Army calls them fox holes.

The FNG or F**king New Guy in the Army is the counter part to the Marine Corps’ B.O.O.T. (Barely Out Of Training). Both are troops fresh out of Basic who have yet to earn their fire team’s respect. They’re prone to mistakes and known for having no common sense. They’re the first ones up to police call a range or sweep the company office.

The Marine Corps uses Unauthorized Absence when referring to a troop who did not show up to work or left his post without permission. The Army uses Absent Without Leave for the same act. Both have dire consequences at the minimum or could lead to a dishonorable discharge in the most extreme cases. Both branches do not forgive tardiness or missing a day of work without approval.

The fastest way to get choked slammed in Marine Corps boot camp is to call a drill instructor Serge. In the Army one can call a sergeant or above serge and nobody cares. Call Master Gunnery Sergeant serge and see what happens.

When I was a child I would always wonder why in some war movies people yelled “Medic!” and in other they called “Corpsman!” The Army has their own medical MOS that gets attached to the infantry. The Marine Corps gets its corpsman from the Navy. They’re the only MOS from another branch that Marines accept as one of its own.

The Marines call their camouflage uniform cammies or utilities. The Army calls theirs ACUs or the Army Combat Uniform. The uniforms differ greatly from color, the use of Velcro, boot bands, patches and name tapes.

The Army has a term for a tactical withdrawal to another position and re-engage the enemy. The Marine Corps does not believe in such blasphemy. Marines fight to every inch of ground and keep it. Marines never pull out. Oorah!