How Army’s mascot came to be - We Are The Mighty

How Army’s mascot came to be 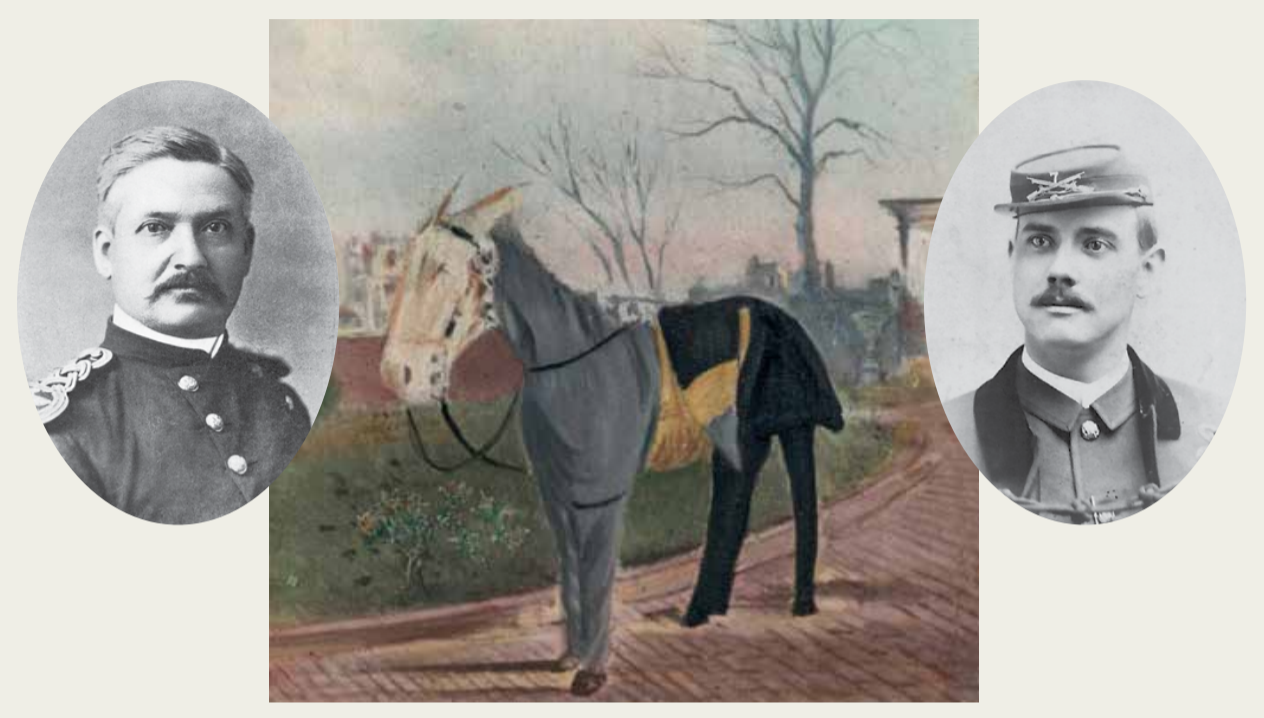 On December 2, 1899, Colonel Gonzalez Bingham woke up with a smile. As the quartermaster of the Schuylkill Arsenal in Philadelphia, Pennsylvania, he had plans to attend the first Army Navy Game to be played in that city. Adding to the excitement and anticipation of a big game was the fact that the Army-Navy Game had not been played in six years. President Grover Cleveland decided to halt the game when fights broke out after the 1893 game, believing that the interservice rivalry had gotten out of control. Slowly, over the next few years, support for resuming the game grew, and it was decided to renew the tradition on December 2, 1899 at Franklin Field in Philadelphia, one of the few places with a stadium large enough to handle the expected crowds.

When the big day arrived, everyone was on their best behavior. Army and Navy sent bands down Philadelphia’s Market Street prior to the game. Debutantes, city officials, old Civil War veterans and cabinet officers up from Washington, DC made their way to the stadium. It was the biggest day in sports the nation had seen, and tickets had long ago sold out.

What fans did not know was that Bingham had a secret. A big one! He had been scheming and planning for weeks to do something to delight the crowd, rally the cadets, and inspire the team. Colonel Gonzalez Bingham was about to introduce the very first Army Mule as the mascot of West Point. Up until the 1899 game, Army had never had a mascot. Worse yet, Navy had for several years adopted a goat as their mascot. In fact, legend has it that the first Navy Goat was actually a pet goat “borrowed” from the backyard of a West Point faculty member by a Navy fan and dragged off to the game, which was the first Army-Navy Game played on the West Point Plain. While the details have been lost and history has turned to legend, all West Pointers know that the story fits everything they know about Navy, so the tale must be a stone-cold fact! West Point grads might feel some lingering outrage from the theft of a goat on the grounds of West Point, but then again they also have to question the wisdom of any Army officer who selects a goat as a pet, so it’s best to leave the story for another time.

Getting back to Bingham’s insightful brilliance in December 1899 and the Army Mule, that story actually begins much earlier with Bingham’s father, Judson Bingham, Class of 1854. Upon graduation, Judson Bingham worked his way up as a quartermaster and found himself in support of Major General Ulysses S. Grant, Class of 1843, and Major General William T. Sherman, Class of 1840, during the Civil War. In fact, it was the efforts of quartermasters like Judson Bingham that largely allowed Grant to take the audacious gamble of slipping loose from his supply chain, floating down the Mississippi, and successfully attacking Vicksburg. It was one of the brilliant campaigns of the Civil War, but to be successful, Grant depended upon the abilities of inspired quartermasters to feed and supply an Army that was living off local supplies once traditional supply lines had been cut. Later in the war, Sherman would adopt a similar strategy in his famous march through Georgia. Sherman also relied on Judson Bingham for managing the complex supply lines. And what did Judson Bingham rely upon?

Mules could carry large loads and could live on most any fodder. As Sherman’s quartermaster, Judson Bingham used them with great effect, and his ability to supply and sustain large armies operating far away from traditional supply lines was brilliant. Interestingly enough, one of Judson Bingham’s greatest challenges was to keep his mules from being captured by the Confederate raiders led by one of his classmates, Major General J. E. B. Stuart of the Confederate Cavalry.

Without any doubt, Judson Bingham owed much of his success to the effective use of mules. Grant certainly knew it, and he felt a great admiration for mules and would often intervene when he saw anyone mistreat a mule. Sherman did too. Long after the Civil War was over, when Sherman was serving as Commanding General of the U.S. Army, he got word that a favorite mule that had served with distinction was about to be sold off. Sherman forwarded the information to Robert Todd Lincoln (President Abraham Lincoln’s son), the Secretary of War, who quickly responded with the following message: “The Quartermaster’s department will be charged with ingratitude if that mule is sold or the maintenance of it is thrown on the charitable officers of the post. I advise he be kept in the Department, fed, and maintained until death.”

Judson Bingham retired as a brigadier general and had a son, Gonzalez Bingham, who also joined the Army and went into the Quartermaster Corps. The young Bingham would have heard the many stories about the effective use of mules in Civil War campaigns, and he also knew that his father loved West Point (Judson Bingham is buried in the West Point Cemetery). Like his father, Bingham also had a successful career in the Army. In 1899, he oversaw the sprawling Schuylkill Arsenal, which functioned as the Quartermaster Center for the Army.

And so, on December 2, 1899, fortune smiled on West Point, because Gonzalez Bingham was the right guy at the right place, at the right time. He had heard his father talk about the great service of mules in the Civil War. He also knew that his dad loved West Point and had almost certainly heard the shameful story of the filched Navy Goat. Best of all, Bingham was willing and able to take initiative. He knew that Army had never had a mascot and was about to change all that.

Bingham’s job as a quartermaster put him in the perfect place to commandeer one of the many mules that served the Schuylkill Arsenal. His selection was a big mule that pulled an ice wagon. Based on his color, the mule went by the name “Big White.” The next inspiration of genius came from Bingham’s wife, Nettie, whom he had met while serving in the West. Nettie was the daughter of an Army officer serving at the same post on the western frontier as then Lieutenant Bingham and she knew that if a thing is to be done in the Army, it best be done well.

It was Nettie who came up with the idea to fully outfit the mule in the proper attire. Under her guidance, a special “uniform” was fashioned in the cadet colors of black, gray, and gold. Nettie also organized a group to attach silk ribbons to Big White’s tail, and when they had finished the mule was escorted into Philadelphia’s Franklin Field. Cadets and other Army fans went wild!

The next day newspapers noted that the mule “carried the West Point colors with an air of mulish superiority to anything in his vicinity.”

Big White not only warmed the crowd and inspired the cadets, but also helped Army overcome a Navy team that was heavily favored to win the game. Navy had a much better record, and few thought Army had much of a chance. But immediately after the arrival of Army’s first Mule, the game was never in doubt, and Army went on to a convincing 17-5 win, having never trailed in the game.

When the game was over, Nettie Bingham had hoped to salvage the silk ribbons she had bought, along with the cadet uniform that she had pieced together, but the first Army mascot was such a sensation that fans literally tore the mule’s uniform apart trying to grab a piece as a souvenir. From those humble beginnings in 1899, the Army Mule has served as the official West Point mascot. He fulfilled his duty to the Army with honor by securing a win over Navy. Then, he gave up his uniform and returned to civilian service, hauling ice to help build and grow our country. Mules would continue to serve as the Army mascot following the 1899 game, but they were just loaned or rented for game day: West Point would not have a fully enlisted Army Mule with dedicated duties until the 1930s. Bingham continued to serve with distinction and had a son, Colonel Sidney Bingham, Class of 1912, who taught history and English at West Point. Sidney Bingham’s son, Sidney Bingham Jr., also attended West Point and graduated in 1940. He was awarded the Distinguished Service Cross for his heroic action leading the 1st Battalion, 116th Infantry Regiment at Normandy on D-Day,

As learned from this origin story, Army’s mascot is not some cartoonish figure nor a random animal typical of other college mascots. Nor was he shamefully purloined from someone’s backyard. Instead, our mascot is a warrior that was selected because of great service to the nation, a battle-tested beast called upon to do hard things, in hard times, and that did so with distinction.

Mules have earned the honor of serving as Army’s mascot, and the Army Mule is a living example of Duty, Honor, Country.

This piece was originally featured in the West Point Association of Graduates Winter Magazine and was submitted by the author for WATM’s republish.