This is how letters of appreciation are actually useful 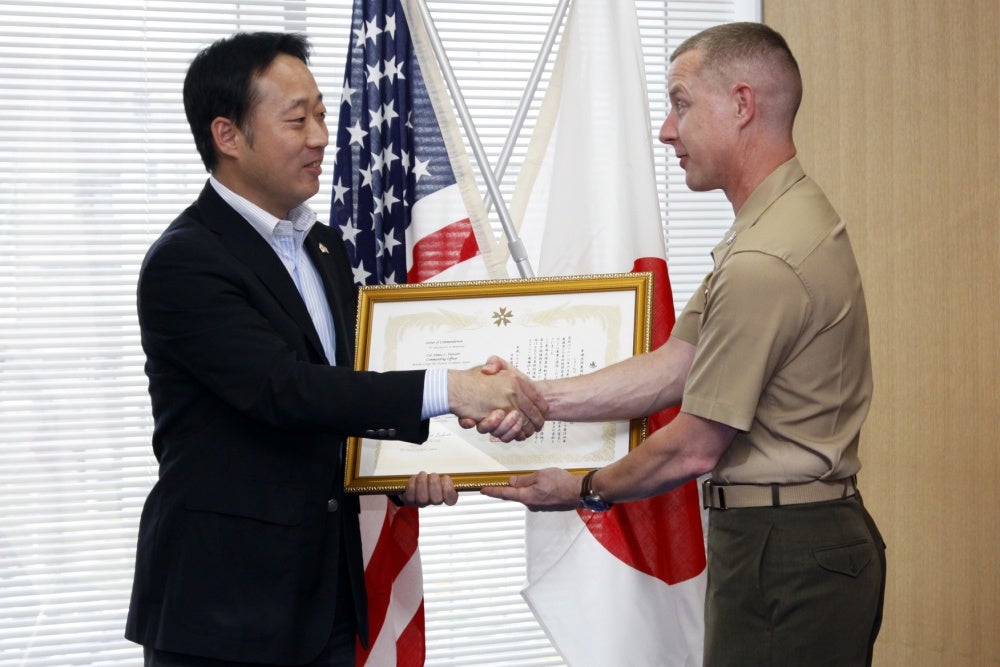 Yoshihiko Fukuda, Iwakuni city mayor, presents Col. James C. Stewart, station commanding officer, with a letter of appreciation at the Iwakuni cityhall, June 13, for the station’s contribution during Operation Tomodachi. Operation Tomodachi was the joint relief effort conducted by the U.S. and Japanese government to help the victims of the 9.0 magnitude earthquake and tsunami that shook northern Japan March 11.

A letter of appreciation feels like a wet dollar: It still has value but it does not do much – at first glance. When a Marine does something above and beyond but not to the point that they earned a medal it’s a gray area for some commanders. Officers in particular want to recognize their troops for their service but there are several politics at play when issuing awards. You can cross the no-man’s land between nothing and awards using letters of appreciation to close the gap.

How to get some

Attaining a letter of appreciation is easy on paper yet you must do something that is outside the norm. For young troops first entering the Fleet Marine Force, good luck on getting awarded anything before your first deployment. No one is going to give you a Navy Cross for taking charge of working parties. A sergeant, however, may take notice of your dedication to duty and run it up the chain of command to give you something.

They’re the easiest award to pitch

The biggest mistake troops do when first meet their new platoon sergeant and platoon commander is not being upfront with what one wants out of the service. When they ask you ‘what motivates you?’ and you choose the generic, falsely altruistic response that doesn’t include awards that’s what you’re going to get – nothing. Months later you are in formation you will watch someone else get the recognition for what you’ve done a million times over. Its because you didn’t open your mouth.

One says that you do not want awards because that is the proper thing to say. Being a ribbon chaser, someone who pursues awards, is a perceived negative trait. However, you’re not chasing the enemy into an ambush so you can get the Medal of Honor, it’s an ‘atta ’boy’.

The next time you have a heart to heart with the first rung of your chain of command and they ask what motivates you, say ‘A letter of appreciation would be fine.’ They do not have to do too much paperwork, there isn’t a massive approval process, there is no investigation, its literally a letter saying that you did a good job. It takes less time to go to lunch. If your command won’t write two paragraphs thanking you for months of back breaking labor than it’s time to talk to your career planner and go somewhere else.

When you ask for so little, they may straight up give you the medal your deserve.

A side note: Although the order says a copy of the letter will not be put into your OMPF, it will annotated that you have received a letter of appreciation but not why. So, they’re still valuable.

Establishes a pattern of good conduct

After every major field op, battalion movement, or deployment is the time when the top brass asks their officers if anyone within their command deserves an award for meritorious action. This is where those letters of appreciation come in handy. It is a negative quality for an officer to continuously give LOAs. Enlisted troops also judge their officers when they continuously give LOAs than an actual awards.

Officers high up the food chain will see you name time and again and recommend a higher award. For example, the battalion commander informed his officers that they can issue ‘X’ amount of ‘Y’ awards pertaining to the deployment in Afghanistan. Where ‘Y’ is the various kinds of individual awards they’re willing to approve. A troop with seven LOAs deserves a Meritorious Mast, surely. A troop with two or three Meritorious Masts should be only earning medals past this point. The administrative element of the military has evolved into a bureaucratic machine, a necessary evil to keep the gears of war lubricated. It may be a wet dollar but you can still buy things with it.