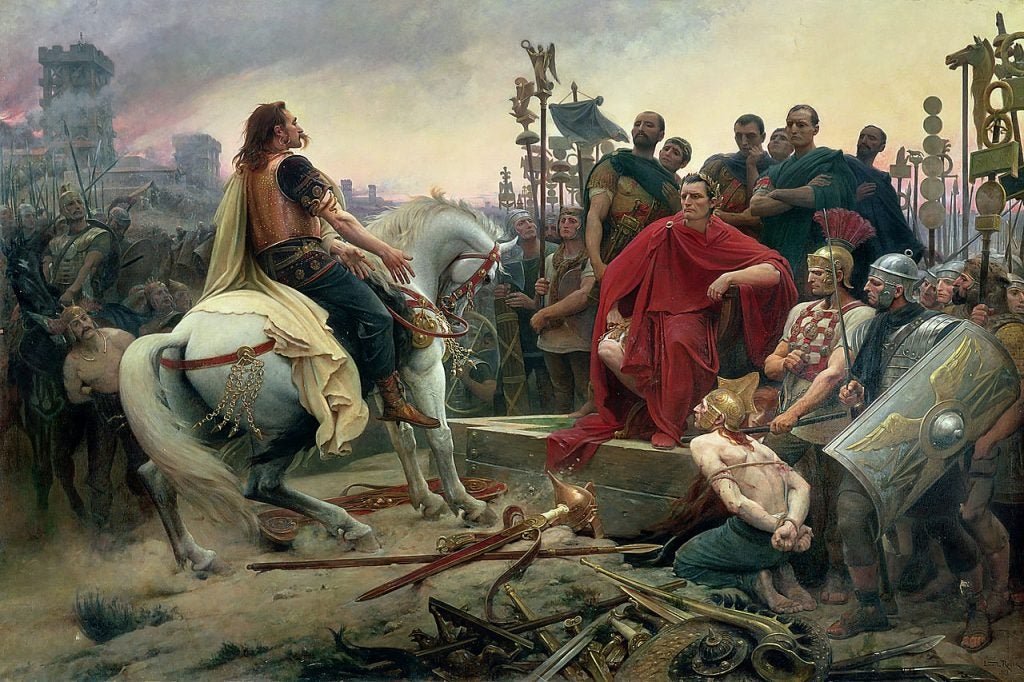 Vercingetorix throws down his arms at the feet of Julius Caesar, painting by Lionel Royer. (Wikipedia).

Best known to the Greek literature, a Roman war hero ought to be of divine ancestry and, on the contrary, be also a mortal. Nevertheless, Roman heroes concentrated on their humanity as compared to their divinity. Several traits had to be checked off the list to be recognized or glorified as a Roman hero.

According to the traits of a hero, a Roman war hero had to validate several characteristics such as fairness, courage, loyalty and strength. Additionally, a hero had to be human, which signifies that they were flawed by jealousy, rage, and vengeance.

Generally, a Roman war hero is a multifaceted man characterized by being courageous, deeply sensitive, enigmatic, passionate, bold, and conflicted by passion and duty.

Long before the nation came to life, the ancient Romans paid specific attention to their warriors or soldiers. In ancient Roman times, the soldiers served in a distinctive position in the community. Among the advantages of being a Roman war hero was its consistent pay.

Strong males were sure to land a job in one of Rome’s numerous construction projects; however, it could not be entirely depended on. On the other side, soldiers received regular pay and meals, not forgetting a place to reside, which was created for numerous recruits.

An excellent example of this is when a Roman soldier in Julius Caesar’s time received 225 silver denarii every year, paid in installments thrice per year. In the following century, the tyrannical Emperor Domitian scaled the pay to 300 silver pieces, and later on, emperors continued to raise the bar.

Like the present-day military men and women, the Roman war heroes had their valors adorned for battle. Moreover, tiny metal pins and bearing pictures of flags were rewarded to individual heroes for excellent services. Gold armbands or even armillae were awarded to signify superior courage. A corona or crown recognized the highest bravery, or better yet, a cluster of bronze leaves expertly attached to the helmet.

Normally, the Roman war heroes were granted a piece of farmland to decide if they wanted to live on or sell. This form of glorification and honor is the current pension or retiree’s current representation.

Furthermore, gravestones read the Roman war heroes – listing their names and the unit numbers they diligently served in, establishing a significant deal of pride in their service.

The Romans glorified their war heroes and had significant respect for them since they regarded them as solid protection from the world of brutality. Besides, several monuments were raised in their honor which was very common and frequent.