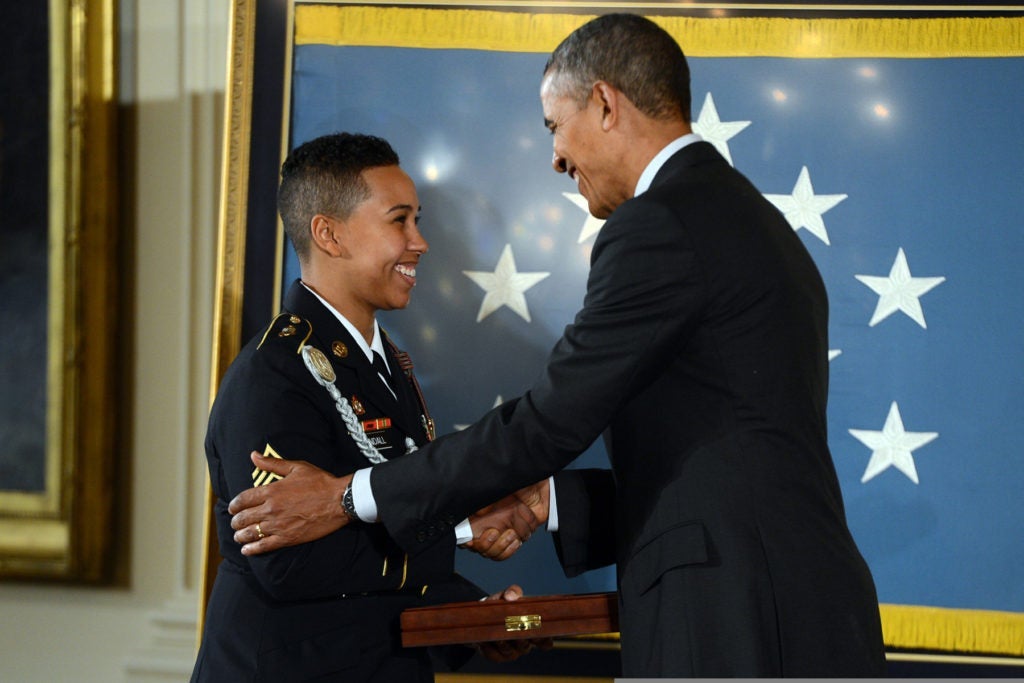 In the annals of military history, the Korean War is unique in the sheer numbers of human wave attacks that defenders were forced to confront. Like the Japanese in WWII, the Chinese and North Korean forces were keen on assaulting defensive positions with overwhelming numbers. Unlike the Japanese, however, this was a preferred tactic rather than an act of desperation.

American and United Nations forces would pay dearly to hold their positions against these attacks. Many men gave their last full measure of devotion to secure the safety of their comrades. For some men, that last full measure involved fighting to the death in hand-to-hand combat. In the image above, we see a granddaughter of one of these men accepting the Medal of Honor on his behalf. These four heroes really gave everything they could.

In the early morning hours of June 7, 1951, the communists launched an all-out assault at a strategic hilltop held by F Company, 31st Infantry Regiment.

Manning a machine gun covering the main approach was Pfc. Jack Hanson. As the attackers rushed forward, he poured devastating fire into the ranks. The maelstrom of bullets going both ways wounded the four riflemen holding the position alongside Hanson.

As they were evacuated, Hanson was told to relocate to a more tenable position. Meanwhile, the charging enemy forces were threatening to overrun.

Disregarding the order, Hanson held his position to continue engaging the enemy. As others fell back, they reported that Hanson was single-handedly putting up a dogged defense. He never arrived at the fallback position.

Near dawn, his company counterattacked. When they regained their previous positions, they found Pfc. Hanson lying in front of his gun emplacement. His machine gun ammunition was depleted and in his right hand was an empty .45 caliber pistol. In his left hand was a blood-soaked machete. All around him were the bodies of 22 slain enemies.

For his valiant last stand, Hanson was awarded the Medal of Honor.

On Sept. 1, 1951, the communists launched an offensive on a position held by F Company, 2nd Battalion, 17th Infantry Regiment. Assisting in the defense of the sector was Pfc. Anthony Kaho’ohanohano and his machine gun squad.

As the enemy surged into the position, Kaho’ohanohano realized it was untenable and ordered the withdrawal of the rest of the squad. He then rushed to retrieve ammunition and grenades, shrugging off his shoulder wound, and returned to his original position to cover the retreat of friendly forces.

His accurate fire drew the attention of the charging enemy, who focused their efforts on taking out the lone defender. He blasted away with his machine gun until his ammunition was depleted. He threw all of the grenades he had, but the enemy was still coming.

Undaunted, Kaho’ohanohano grabbed his entrenching tool and stood to meet his foes. He fought valiantly until the enemy’s numerical superiority overwhelmed him and they overran his position.

His staunch defense inspired his comrades and allowed them time to regroup to launch a coordinated counterattack. When friendly forces retook the position, they found thirteen dead communists around him. Kaho’ohanohano was awarded the Medal of Honor for his actions.

On Sept. 13, 1951, the Americans launched an effort to take a heavily fortified and well-defended ridge. The area eventually gained the infamous nickname, “Heartbreak Ridge,” due to the desperate fighting that went on there.

Just four days into the battle, a young draftee from Hawaii, Herbert Pilila’au, would exemplify the courage of those who fought on Heartbreak Ridge.

On that day, Pilila’au and the rest of C Company, 23rd Infantry Regiment, charged up the slopes of the ridge, intent on taking Hill 931. However, his platoon’s attack bogged down and they set in a defensive perimeter while the remainder of the company set in elsewhere.

With the help of supporting fire, the platoon was able to hold back probing attacks. Before long though, the North Koreans attacked in force and Pilila’au’s platoon attempted to rejoin the rest of the company.

Pilila’au, his squad leader, and the company artillery observer remained behind to cover the withdrawal. As the other two called for fire onto the encroaching enemy Pilila’au poured withering fire into the enemy with his BAR.

Despite friendly artillery landing all around him, enemy forces charging forward, and dwindling hopes of a successful retreat, Pilila’au remained in his position to ensure his comrades were secure.

When he expended the last of his BAR ammunition, he met the enemy advance with grenades. When those were gone, Pilila’au grabbed his trench knife and charged from his position to battle his foe hand-to-hand.

From their now secure vantage point, his fellow soldiers watched Pilila’au charge headlong into the communists, stabbing and punching as he went until he was overwhelmed and felled by an enemy bayonet.

When American forces retook the position the next day, they found the bodies of 40 dead enemies around Pilila’au.

For his courageous actions on Heartbreak Ridge, Pilila’au received the Medal of Honor.

On May 23, 1951, a dense fog rolled into the positions held by the men of G Company, 7th Infantry Regiment. Hiding in the fog was an overwhelming enemy force, approaching for an attack.

One of the men holding the line against the Communist onslaught was Pvt. Demensio Rivera. With little to go on other than shadows in the fog, Rivera engaged the onrushing enemy with deadly accurate rifle fire. When his rifle jammed, he discarded it and fought on with his pistol and hand grenades.

When an enemy attempted to infiltrate the position through a nearby defilade, Rivera left the safety of his position and killed the enemy in hand-to-hand combat.

As the enemy continued to press the attack Rivera expended his pistol ammunition and all of his grenades but one.

With a mind on nothing other than devotion to duty, Rivera pulled the pin and waited for the enemy to storm his position. When that attack came Rivera calmly dropped the grenade among himself and his attackers, knowing full-well it would be the end of him.

After the grenade’s detonation, friendly forces rushed to Rivera’s position. To their surprise, Rivera was still alive, though gravely wounded. He was surrounded by the bodies of four enemy soldiers.

Rivera’s selfless actions in the face of overwhelming odds earned him the Medal of Honor.