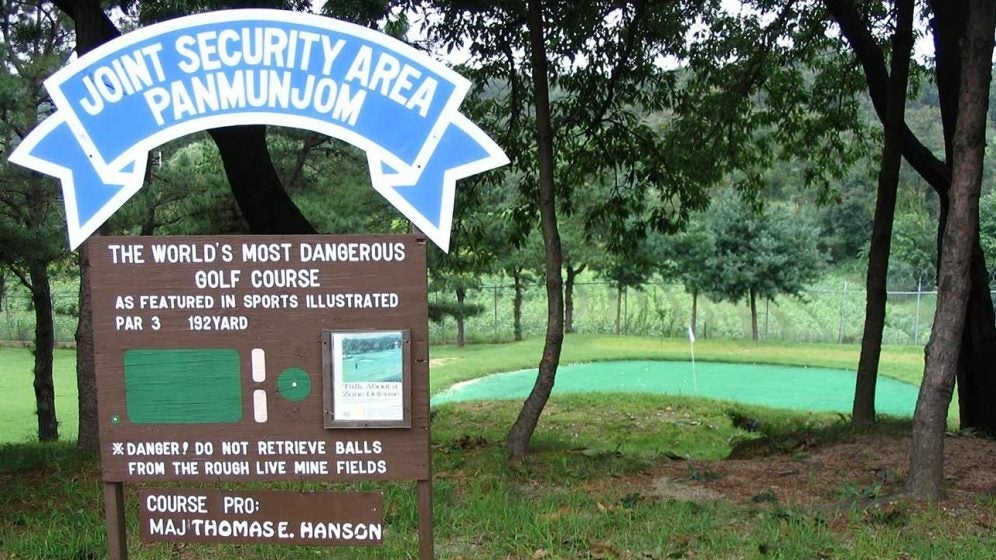 Camp Bonifas in Panmunjom, South Korea is named for Captain Arthur Bonifas who was killed by North Korean soldiers in 1976 during the infamous Axe Murder Incident. Sitting next to the Demilitarized Zone, the buffer area between North and South Korea, the base serves as a frontline outpost against any possible North Korean incursion. In addition to the heavy security and first-response troops, Camp Bonifas also hosts what has been called the “World’s Most Dangerous Golf Course.”

The one-hole, 192-yard par-3 is made of artificial turf and sits less than 500 yards from the DMZ. Forget playing through roughs and trying to read greens. A duff here could send your ball into a literal minefield. There’s also an abandoned bunker and a ginseng field to make playing through that much more difficult. The tee box sits 50 yards above the fairway which was built on top of an old machine-gun position. Strong winds from the North Korean side of the DMZ also make shots here difficult.

ESPN reporter Shelley Smith visited Camp Bonifas during the 1988 Seoul Olympics and again in 2012. “It’s about the same,” she said of the golf course during her second visit. Although the idea of a golf course so close to the DMZ seems silly, it is a much-needed distraction for the American and Korean soldiers stationed there. Strategically, a base like Camp Bonifas is not expected to hold out against an all-out invasion by North Korea. Spending some time on the green is a welcome distraction from this grim reality.

Because of the nature of the base, soldiers are not allowed to bring family members when they are assigned to Camp Bonifas. However, the base is a popular tourist destination. As many as 1,000 visitors come through the base daily (pre-COVID). Troops posted at Bonifas have to memorize a 13-page history of the Korean War in order to give tours and answer questions. The base even has a gift shop stocked with DMZ-themed knick knacks.

Famous visitors to Camp Bonifas include professional athletes Andrew Luck, Randy Johnson, and Paula Creamer. “It’s so humbling because the way I look at them, I feel like I have the most respect,” Creamer said of the troops stationed at Bonifas when she visited and played a round. “I don’t know how they do it being so far away from their families and keeping your country safe and fighting for us. Their faces light up when you talk about sport in general but being a female golfer coming in there and being able to hit chip shots or balls on the range and play the toughest par-3 in the world, that’s pretty cool.”