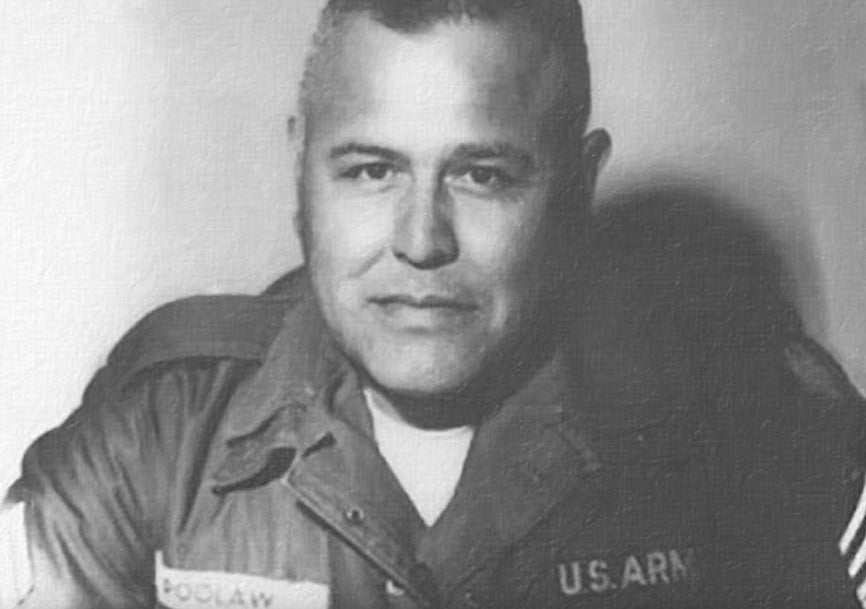 The Kiowa Native Americans have a strong and proud warrior culture. Their enemies feared and respected them on the battlefield. In fact, the most decorated Native American in United States military history is a Kiowa.

Pascal Cleatus Poolaw was born on Jan. 29, 1922 in Apache, Oklahoma. In 1942, he joined his father and two brothers in the military to fight in WWII. Upon completing basic infantry training, Poolaw was sent to the European theater.

On Sep. 8, 1944, Poolaw was assigned to the 8th Infantry Regiment’s M Company near Recogne, Belgium. There, his unit launched an attack on German forces. Despite heavy enemy machine gun fire, Sgt. Poolaw led his company forward while hurling grenades at the German positions. Although he was wounded during his assault, Poolaw did not waiver. For his actions, he was awarded a Purple Heart and Silver Star — the first of many. His Silver Star citation noted, “Due to Sergeant Poolaw’s actions, many of his comrades’ lives were saved and the company was able to continue the attack and capture strongly defended enemy positions. Sergeant Poolaw’s display of courage, aggressive spirit and complete disregard for personal safety are in keeping with the highest traditions of the military service.”

After WWII, Poolaw stayed in the Army and served again in Korea. On Sep. 19, 1950, Sgt. First Class Poolaw and his company made an attack on an enemy position. However, they were halted by intense enemy fire. Poolaw volunteered to lead a squad in a flanking assault on the enemy’s perimeter. With Poolaw at the front, the American counterattack hit the enemy hard and fast. Through intense hand-to-hand combat and absolute determination, Poolaw successfully led his squad and routed the enemy, earning him his second Silver Star.

Less than a year later, on April 4, 1951, Master Sgt. Poolaw earned a third Silver Star. During an attack near Chongong-ni, one squad of Poolaw’s platoon became trapped by enemy mortar and machine gun fire. With complete disregard for his own safety, Poolaw exposed himself and charged across open terrain at the enemy, firing his weapon as he progressed. The solo assault drew the enemy fire off of Poolaw’s squad and they were able to move to a more advantageous position. In addition to his two new Silver Stars, Poolaw also earned another Purple Heart, and the Distinguished Service Cross in Korea.

In 1952, Poolaw returned to the states. After serving another 10 years in the Army, he retired. However, the Vietnam War brought the Kiowa warrior out of retirement.

By 1967, all four of Poolaw’s sons were in the military. Pascal Cleatus Poolaw Jr. was wounded by a landmine in Vietnam and lost his right leg. When the youngest of Poolaw’s sons, Lindy, was drafted, Poolaw re-enlisted in the Army to fight and keep Lindy off the front lines. However, by the time the elder Poolaw reached the point of departure on the West Coast, Lindy had left for Vietnam just the day before.

Poolaw deployed to Vietnam as the 1st Sgt. of Company C, 1st Battalion, 26th Infantry Regiment. On Nov. 7, 1967, his unit conducted a search and destroy mission near the village of Loc Ninh. There, Poolaw and his men were ambushed by a numerically superior Viet Cong force. He immediately sprung into action and led a squad to lay down a base of fire, bearing the brunt of the attack. Under a hail of bullets and rockets, Poolaw moved amongst his troops, ensuring they were in proper fighting positions and returning effective fire.

During the engagement, Poolaw pulled wounded men back to safety despite being wounded himself. As he assisted one of his wounded soldiers, Poolaw was struck by an RPG and killed. His fourth Silver Star citation states, “His dynamic leadership and exemplary courage contributed significantly to the successful deployment of the lead squad and undoubtedly saved the lives of many of his fellow soldiers.” Poolaw was also posthumously awarded his third Purple Heart.

Shortly before his death, Poolaw wrote a letter home explaining that he rated his job as more important than his own life. His wife, Irene, echoed this sentiment in her eulogy for Poolaw at the Fort Sill Post Cemetery.

“He has followed the trail of the great chiefs,” she said. “His people hold him in honor and highest esteem. He has given his life for the people and the country he loved so much.”

Over the course of three wars, Poolaw earned 42 medals and citations including the Distinguished Service Cross, four Silver Stars, five Bronze Stars for valor and three Purple Hearts—one for each war.