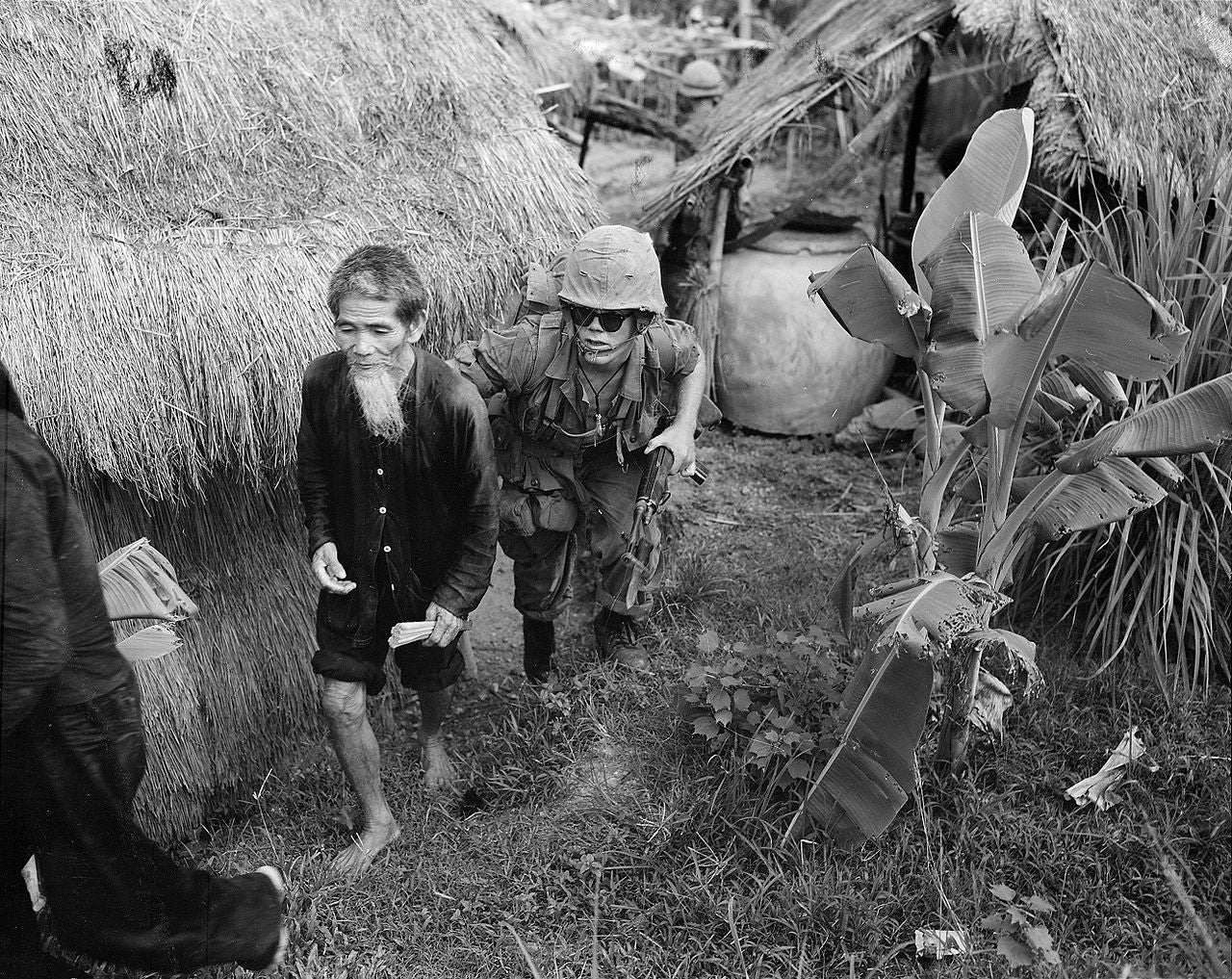 A Marine from 1st Battalion, 3rd Marines, moves a suspected Viet Cong during a search and clear operation held by the battalion 15 miles (24 km) west of Da Nang Air Base, 1965. (USMC photo).

Not all heroes carry a gun. Sometimes they carry a … camera? William T. Perkins Jr. was awarded for his valance when he saved fellow soldiers, partly in thanks to his own camera. At just 20 years old, the New Jersey native became the first of his kind – a military hero behind the lens.

When Vietnam began, it was the first war after the invention of video cameras. This led to a flood of homemade videos that were made by soldiers, attempting to capture the reality of what was going on overseas. But in the case of William T. Perkins Jr., it wasn’t about just relaying war, it was about telling a story.

The Marine was serving as a combat photographer and videographer– one of the first of his kind. After all, he got to shoot onto 16mm film. What he caught on camera would be shown to the masses back home and he wanted to make it count. Perks was in school for motion picture photography, and had an interest in real-life training.

However, Perkins began his stint with the Marines taking still pictures while remaining in the United States. He wanted to capture more and requested a tour, to which his wishes were granted. By July 1967, he had landed in Vietnam and was capturing live fighting and daily operations on film.

Though Perkins was armed with a .45 automatic pistol, it was his cameras he used on the daily. He filled on his Marine-issue recorder and also took images with his personal 35mm film camera. Weekly he mailed rolls of film back to his family with images of military vehicles, fellow soldiers, landscape, and even Vietnam children.

Perkins continued to film as grenades were dropped, bullets pelted U.S. forces, and medivacs were called into rescue injured soldiers. After the NVA retreated, Perkins himself was caught on camera, filming helicopters as they flew in for backup.

However, with the launch of helicopters, their position was given away. Three NVA companies came in fast and furious, launching grenades on the remaining soldiers. Into the night, Perkins is said to have found refuge at the battle’s perimeter along with three other Marines.

Film continued to roll throughout the ongoing battle. It was Perkins’ attention to the camera that allowed him to see an incoming grenade as it lit the sky. He yelled, “INCOMING GRENADE,” and dove atop it while kicking another Marine from the action. They reported his heroics and for having saved their lives.

Though Perkins did not survive, his video camera – grenade damage and all – was returned to the U.S. It remains in the National Museum of Marine Corps to this day.

Posthumously, Perkins was awarded the Medal of Honor – the first combat photographer to receive such an award – by President Nixon. His parents received the award on his behalf, where they also shared many of the images he had sent them via film.

Perkins is credited with having saved Marine lives, as well as capturing countless images, and historic video footage within Operation Medina, as well as throughout the Vietnam War.

In 2015 his mother, Marilane Perkins Jacobson, donated the medal, letters her son had written her, and other items, to the Armed Forces Collection where it remains as a permanent exhibit.

He remains the only combat photographer to receive a Medal of Honor.