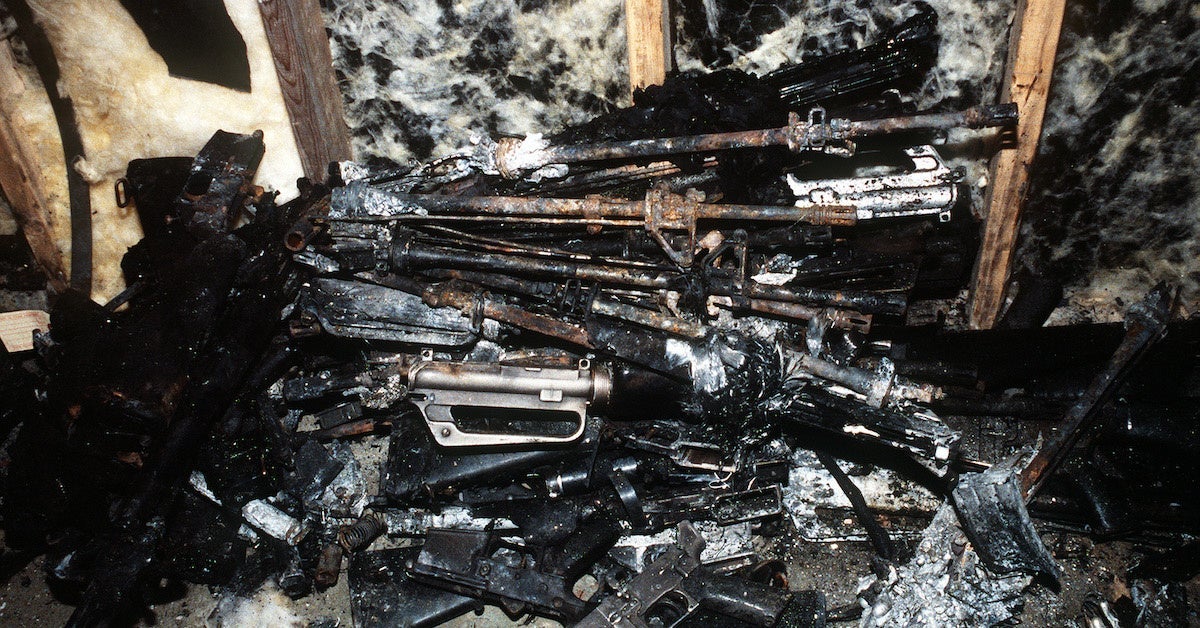 Charred weapons recovered from the wreckage of an Arrow Air DC-8 commercial aircraft are stored in a Gander Airport hangar for analysis by members of the Canadian Air Safety Board. The aircraft crashed at the airport with no survivors on December 12, 1985, while carrying 248 members of the 3rd Bn., 502nd Inf., 101st Airborne Div. They were returning to the United States after participating in peacekeeping duty with the Multi-national Force and Observers in the Sinai Desert. (Wikimedia Commons).

Arrow Air Lines flight 1285 was carrying 248 members of the unit back home to Fort Campbell from Egypt when it suddenly crashed after a layover in Canada.

There were no survivors from the Screaming Eagles or from the flight crew. The Canadian Aviation Safety Board would also become a casualty of the accident.

And the crash was ruled an accident. The flight was chartered by the U.S. government to take members of the 101st back to their home base of Fort Campbell, Kentucky after a six-month deployment as part of a multinational peacekeeping force in Egypt’s Sinai Peninsula. The plane would make two stops before landing in Kentucky, the West German capital of Bonn and Canada’s Gander Airfield in the province of Newfoundland.

It had no issues taking off from both Cairo and Bonn, but shortly after its takeoff at Gander airfield, the plane had trouble getting aloft. The plane began to rapidly descend, hitting trees and breaking up until it smashed into an empty building. Full of jet fuel, the plane exploded.

There were no survivors. It remains the deadliest plane crash in Canadian history and the Army’s single deadliest peacetime crash.

When the Canadian Aviation Safety Board (CASB) investigated, they found the pilots had not asked for the plane to be de-iced, even though icy conditions existed and the wings could have been iced over.

“… shortly after lift-off, the aircraft experienced an increase in drag and reduction in lift which resulted in a stall at low altitude from which recovery was not possible. The most probable cause of the stall was determined to be ice contamination on the leading edge and upper surface of the wing.”

At least, that was the majority opinion of the CASB. Four dissenting members of the board announced their own conclusion that there was no evidence of ice on the wings. They also cited witness reports of glowing red and/or exploding pieces of the fuselage during the takeoff attempt. Combined with other evidence they say ice can’t explain, they were apt to believe the cause was a terrorist attack.

To make matters worse, the terror group Islamic Jihad claimed responsibility for the crash as a terror attack that same day. American and Canadian intelligence agencies denied their claim as an attempt to bolster recruiting numbers. At least one member of the CASB maintains it was a terror attack caused by an onboard explosive.

The two opinions of the CASB satisfied no one, especially the government of Canada, who liquidated the agency and replaced it with a new agency, the Transportation Safety Board of Canada.

In reality, the crash was caused by numerous factors, and terrorists were not one of those factors. The first is that ice could have been present on the plane, but went unnoticed by both pilots and ground crew. This kind of thin but significant ice would later cause another crash in 1989, that of Air Ontario flight 1363. That crash led to a change in Canada’s deicing procedures.

Another cause was human error. The pilots did not check the functionality of the cockpit voice recorder, so not much is known about what was going on in the cockpit prior to the crash, but officials believed the pilots may have misjudged how heavy the plane was, due to the amount of material each soldier carried aboard.

While not the only determining factor, combined with other possibilities, the misjudged weight would be more than enough to keep the plane from achieving proper lift, and thus causing it to crash.

Today there are memorials to the men and women who died in the Gander plane crash, both at the crash site in Newfoundland and on Fort Campbell.