This barracks fire resulted in both heroism and controversy 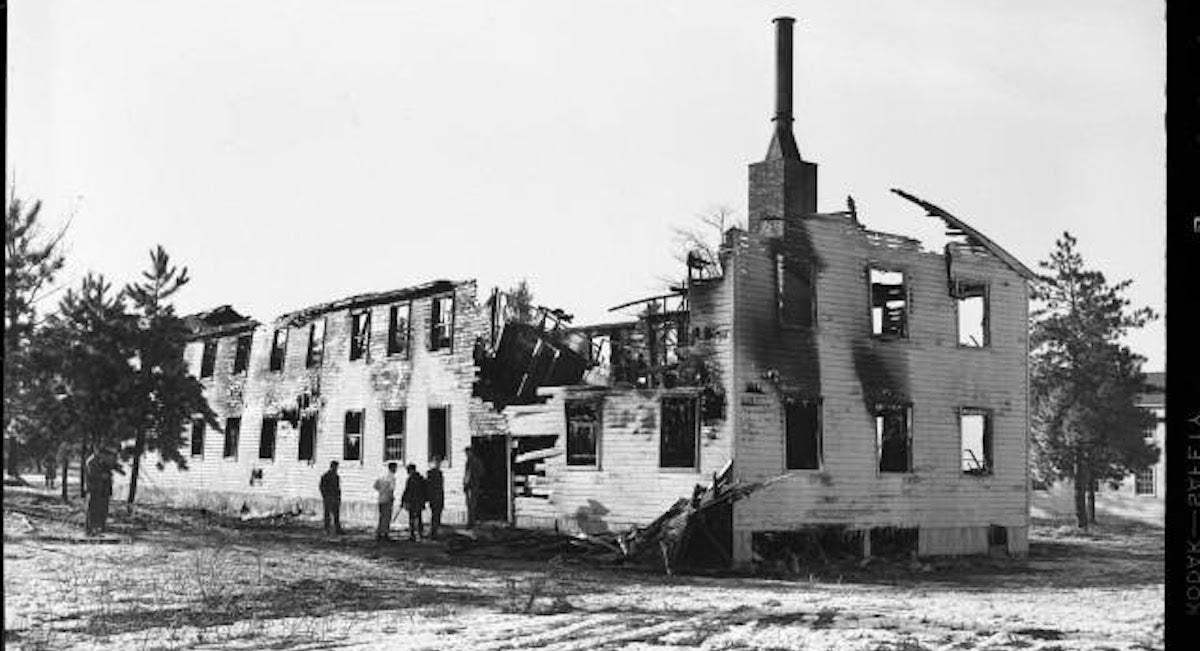 From November 1947 to December 1948, Camp Pine, which would evolve into Fort Drum, hosted the paratroopers of the 82nd Airborne Division for Exercise Snowdrop. The exercise was the largest over-snow airborne maneuver that the Army had undergone at the time and was designed to validate equipment, logistics and tactics for airborne operations in a sub-zero combat environment like the one that the paratroopers would experience if the United States were to go to war with the Soviet Union. Sadly, not all of the soldiers that participated saw the exercise through to its end.

In the early morning hours of December 10, 1947, the officers in building T-2278 were awoken by thick smoke and loud shouts from the second-floor hallway. The shouts came from Turner, who was first alerted to the fire by the smoke at approximately 0230 hrs. “Turner could have escaped at that point, having done his duty to warn his fellow Soldiers, but he did not,” said Col. Gary A. Rosenberg, Fort Drum Garrison Commander. “Ignoring his own safety, Capt. Turner chose to remain in the building to ensure each officer heard his alarm and to help the wounded among them to escape. Only after every wounded man was out of the building — which by this time was completely engulfed in flames — did he turn his attention to his own safety.”

Survivor accounts lead Army historians to believe that, after Turner ran through the building to alert his comrades of the danger, he attempted to jump to safety from a second-story window. Tragically, his wedding ring got caught on a nail in the window and Turner was left hanging amidst the searing flames. He was eventually rescued by Pine Camp firefighters, but was left with severe burns; nearly 90 percent of his body had suffered third-degree burns.

Thanks to Turner, six officers escaped the flames unharmed. In addition to Turner, four other officers were injured but managed to escape. Capt. Robert Dodge, Lt. Robert Manly, Lt. Wallace Swilley, and Lt. Rudolph Feres died in the building. While the other injured officers were treated and sent home, Turner had been so badly burned that he remained at Pine Camp hospital for treatment. After 18 days, he succumbed to his wounds.

Many factors contributed to the tragedy of the Pine Camp barracks fire. First, the roving fire watchman saw smoke but believed that the fire was in a different building. Second, the fire department took about 45 minutes to arrive on site. Third, two-thirds of the firefighters had less than three months of experience. Fourth, the barracks fire was determined to be a quick and violent “flash-fire” that burned rapidly and with very little notice. It took three hours, three fire engines, and 1,950 feet of water line to extinguish the blaze.

The cause of the fire remains a mystery. Duane Quates, an archaeologist with the Fort Drum Cultural Resources Branch, speculates that the fire could have been started by a faulty boiler or a careless cigarette. “This fire is the only structural fire on Fort Drum that had fatalities,” Quates said. “Every other structural fire may have had injuries, but they never had fatalities.” He also noted that the fire was a catalyst for modern fire safety measures like self-closing doors, permanent escape ladders, and heat raiser alarms.

On August 19, 1948, the four widows of the Pine Camp barracks fire sued the United States, claiming that their husbands’ deaths were the result of negligence due to a faulty heater. Their cases were dismissed by a Northern New York District Court judge who stated that the government was not liable for injuries that service members sustain while on active duty under the Federal Tort Claims Act.

The next year, Lt. Feres’ widow, Bernice Feres, brought her case before the Second Circuit Court of Appeals. Again, the case was dismissed. Feres persisted and, the next year, she appealed to the United States Supreme Court. The rulings of the previous courts were upheld and her case was dismissed again. This series of cases led to the controversial Feres Doctrine, which prevents service members from collecting damages for injuries sustained while on active duty and prohibits family members from filing wrongful death suits in the case of a service member’s death. To this day, service members and their families continue to challenge the Feres Doctrine.

On August 27, 2013, Fort Drum dedicated a historic marker to the memory of the men killed in the Pine Camp barracks fire. Still, knowledge of the fire and Turner’s heroic actions are largely unknown. Years of historical research into the event continues today. Joseph “Sepp” Scanlin, the Fort Drum Museum director, says that the museum remains dedicated to its efforts for Turner to receive a military award for his actions during the fire.