Trial by cheese? Here are 6 of the craziest medieval ordeals - We Are The Mighty

Trial by cheese? Here are 6 of the craziest medieval ordeals 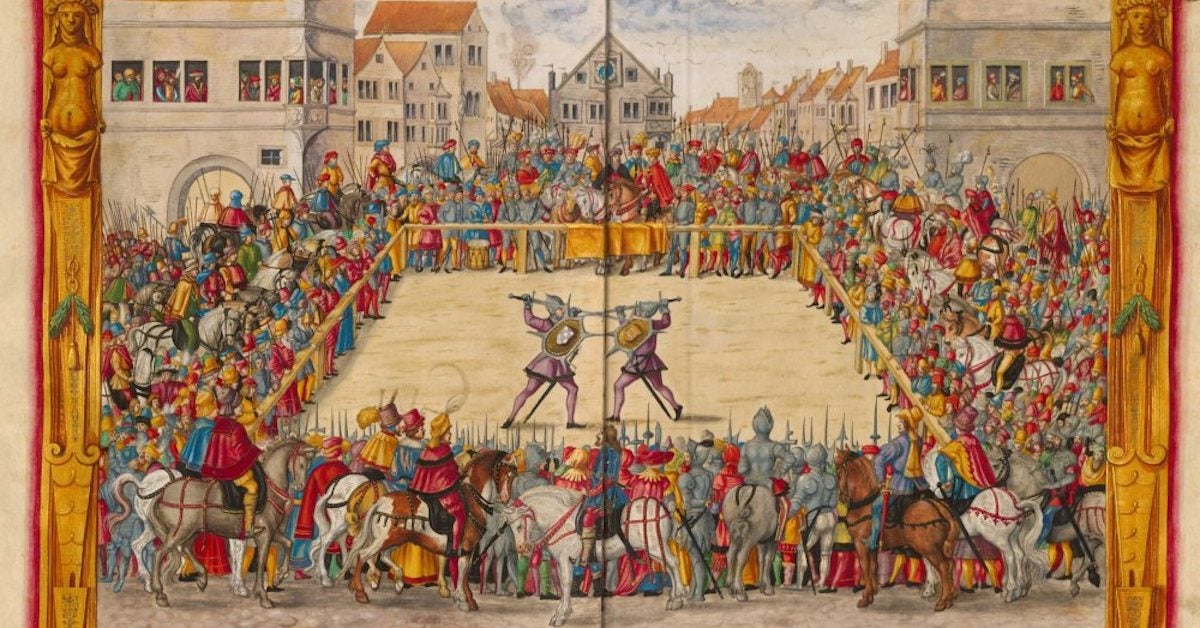 Life in ancient Germany was rough, to put it lightly. You knew who your second cousins were, because you never knew when someone and his cousins were planning to kill you. Maybe you stole some of his family’s livestock, maybe you accidentally insulted his father or maybe one of your ancestors killed one of his generations ago, and he still wants revenge.

In these ancient tribes, blood feuds and violence were all too common. To address this problem people came up with innovative solutions to settle disputes and pass judgments: trial by ordeal. An ordeal required the accuser and the accused in a dispute to perform an action to “test” the gods, asking them to come down on the side of the righteous. Even after the Germanic peoples became Christian, these ordeals were retained, sometimes to the chagrin of Church authorities. Here are 6 of the craziest medieval ordeals.

Everyone knows this one, in no small part due to its popularity in historical or fantasy dramas, like Game of Thrones. The idea was that in a battle between the accuser and accused, God would intervene on the side of the innocent and grant them victory. Interestingly, the Germanic peoples appear to have been the only ones on the European continent with this practice; there is no such record of the Greeks, Romans and Celts practicing trial by combat

2. Trial by the cross

Trial by combat wasn’t popular with everyone, however. Charlemagne encouraged the “ordeal of the cross” in its place, which required the accuser and accused to reach out their arms in the position of the crucifixion, and whoever lowered his arms first lost. Charlemagne’s son Louis the Pious later banned the practice, since it seemed a little impious to imitate Jesus Christ on the Cross for the sake of a minor human problem.

If you thought trial by combat was unpleasant, just wait until you see this. In the trial by fire, the accused would have to hold a burning red-hot piece of iron in their hands and walk a full nine paces before letting go. Their hands would then be wrapped and bandaged, and in three days would be examined by a priest. If their hands were healing properly, then they were innocent, but if the wound became infected, then God was not on their side, and they were guilty.

Medieval Europeans couldn’t get enough of the heat. A pot would be filled with boiling water (or sometimes oil) and a stone dropped into it. The accused would have to reach into the pot to remove the stone, and their burnt hands would be bandaged for three days. Like with the trial by fire, if their hands started the healing process properly, then the priest would proclaim that the accused was innocent.

It was believed in the early Middle Ages that water was pure, especially water used for baptism. In this trial, the accused would be thrown into a body of water to see if he would float or sink, but the best water was the one he was baptized in. If he sank, then the water had accepted him because he was innocent, and if he was guilty, he would float because the water was rejecting him. Many modern people might think this was a catch-22, because you would either be found guilty or you would drown, but not so. People were usually attached to ropes that could easily pull them out if they sank.

One of the strangest medieval ordeals required a man to stuff his mouth full of dry cheese and then take an oath of innocence. If the man accidentally spat some of the cheese out or choked on it, then he would be found guilty. The trial could also be conducted with bread, which was probably no less dry than the cheese.

Though these ordeals were prominent throughout the early Middle Ages, these never sat well with everyone. Plenty of people in the Church opposed these ordeals, claiming that it was sacrilegious to “test God” with ordeals that had their origin in older pagan traditions. By the thirteenth century, popes and kings were starting to discontinue the ordeals, and these nearly disappeared until the witch-hunts of the early modern period.

The next time you’re frustrated thinking about jury duty, be thankful that in our system you only have to risk your time, not your life.