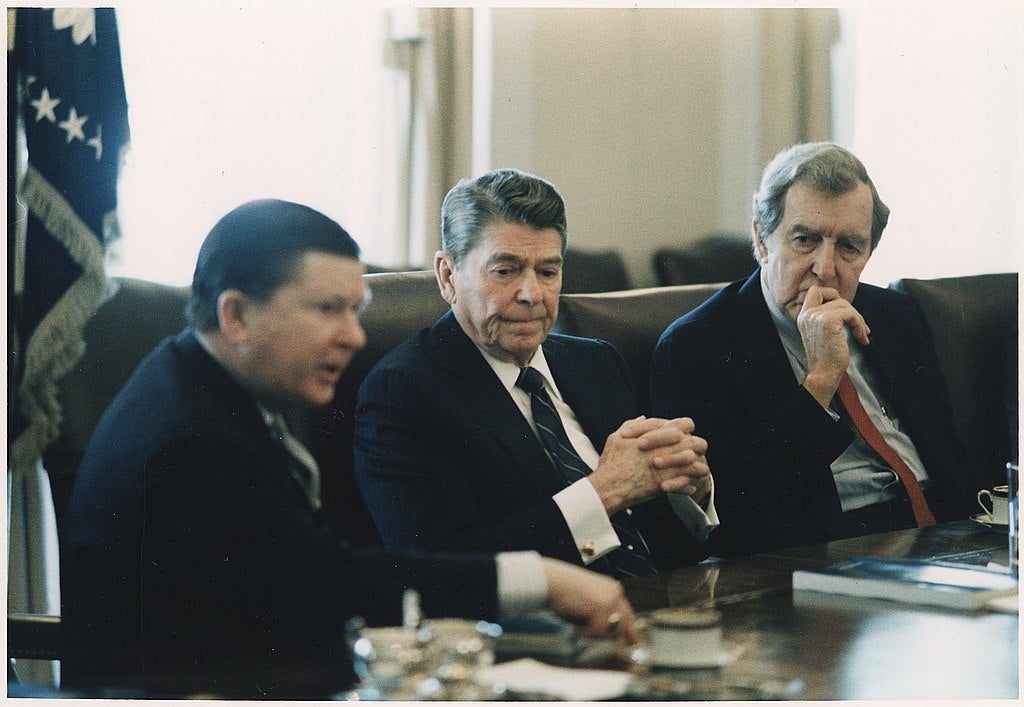 What is it about government officials and their shoddy email practices? Several members of the Trump Administration were discovered to have used personal or unclassified email accounts for classified emails. Using a private server as Secretary of State might have cost Hillary Clinton the 2016 Presidential Election. And, shoddy email practices led to the convictions in the Iran-Contra Affair decades prior.

Email hasn’t really been around as a communication tool for very long, but it seems to land a lot of America’s top politicians in hot water on a regular basis. The truth is, email (or email-like software) has been around a lot longer than we think – and it was getting White House officials in trouble from the start.

In 1985, the Ronald Reagan White House pioneered the use of PROFS, an IBM word processing program, short for “Professional Office System.” It allowed users of the same software to share documents and send messages to one another using a central server. It was essentially an early email server.

Lt. Col. Oliver North and National Security Advisor John Poindexter used the PROFS system to exchange directions and information while working for President Reagan. It sounds like a totally normal use of such a system between a subordinate and his boss, except North and Poindexter were doing a little extra work on the side – work Reagan would later claim he didn’t know about.

One of Reagan’s personal causes was the struggle of anti-Sandinista Contras in Nicaragua. The Sandinista government was a pro-Soviet socialist government and the Contras were violent rebels operating from a remote mountain base near the border with Honduras. In 1984, however, Congress banned military support to the Contras through the House Appropriations Bill of 1984.

Meanwhile, Iran was engaged in a brutal war with Iraq, but after the Iran Hostage Crisis of 1979, President Jimmy Carter implemented a ban on arms sales to Iran. When Reagan took office, he continued Carter’s policy and then lobbied the rest of the world to do the same. But Iran needed weapons and it was willing to go to extraordinary lengths to get them

The only way that interested the U.S. was the release of American hostages, this time taken in Beirut, Lebanon. Lebanon was in the middle of what would be over a decade of civil war. The various terrorist groups fighting there had begun to take hostages to extort money from Western Powers. Iran promised to exert its influence on this group in exchange for arms sales.

The Reagan Administration had been selling arms to Iran through Israel as early as 1991, but in 1985, Marine Corps Lt. Col. Oliver North, an aide on the NSC staff, came up with what he would call “the Enterprise.” Instead of dealing the arms through Israel, The U.S. would sell arms directly to Iran at a much higher price, with the aim of freeing the hostages. The profits of the higher price would go toward aiding the Contras in Nicaragua.

North’s new boss at the National Security Council, retired Adm. John Poindexter, agreed with the plan. Poindexter entrusted North with extraordinary power for an NSC aide, which North used to implement the plan in full. The plan’s execution went smoothly but only two of the original four hostages were freed. Militia groups abducted more hostages.

Then a pro-Syrian magazine in Lebanon, Ash-Shiraa, released the details of the arrangement to the public. This report came one month after an airlift of weapons in Nicaragua was shot down in the jungle making a delivery. The survivor of that crash outed his crewmates as CIA operatives. Then the Iranian government confirmed the whole story. The cat was out of the bag.

North began destroying documents related to the affair almost immediately. He later testified it was an effort to protect the lives of those assets involved with “the Enterprise” overseas. The commission led by Senator John Tower to investigate the Iran-Contra Affair found that, “North may have been adept with a paper shredder, but he apparently wasn’t so well-versed in erasing computer files.”

Poindexter and North were discussing “the Enterprise” using the White House PROFS system. The Tower Commission, while going through the electronic correspondence between the two men, found references to previous messages that could not be found. North had deleted them, but they lived on in the PROFS server, which computer experts were able to retrieve.

Both men were arrested and North was convicted for conspiring to defraud the United States through the complicated arms deal. Poindexter was convicted for five counts of lying to Congress and obstruction of the Tower Commission. Both convictions were also overturned on appeal.