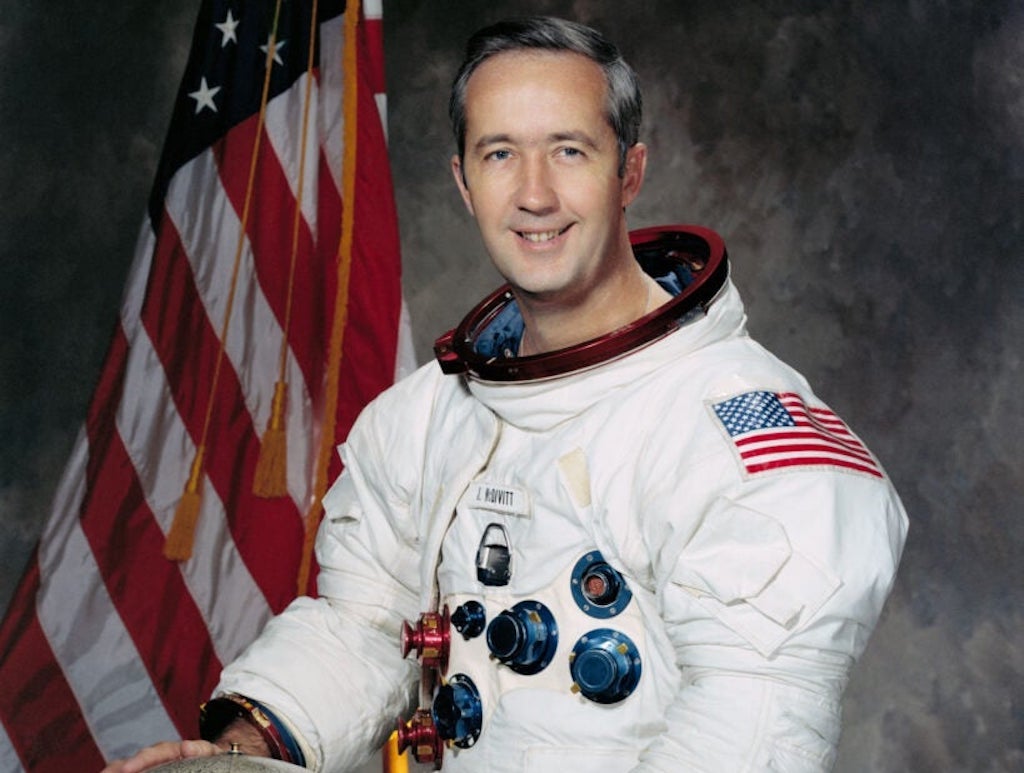 James Alton McDivitt was born on June 10, 1929 in Chicago, Illinois and grew up in Kalamazoo, Michigan. During the Korean War, he joined the Air Force and served as a fighter pilot. After the war, he remained in the Air Force and became a test pilot. In 1962, McDivitt was selected by NASA for the astronaut program. He flew into space on Gemini IV and Apollo 9 before becoming the manager of lunar landing operations. In 1972, he left NASA and retired from the Air Force at the rank of Brigadier General. On October 13, 2022, McDivitt passed away at the age of 93.

In 1947, McDivitt graduated from Kalamazoo Central High School. He worked for a year, saving up money to attend Jackson Junior College in Michigan from 1948 to 1950. In 1951, he enlisted in the Air Force and applied for pilot training. McDivitt was accepted into the aviation cadet training program where he excelled. He was the first in his class to perform a solo flight. In May 1952, McDivitt earned his wings and a commission as a 2nd Lieutenant. He completed combat crew training in November of that year and went to Korea.

After the war, McDivitt returned to the United States where he served as a pilot and assistant operations officer in the 19th Fighter Interceptor Squadron at Dow Air Force Base, Maine. In November 1954, he began advanced flying school at Tyndall Air Force Base, Florida. The next year, McDivitt was assigned to McGuire Air Force Base, New Jersey where he served as a pilot, operations officer, and flight commander of the 332d Fighter Interceptor Squadron. In July 1957, he attended the University of Michigan to complete his degree under the Air Force Institute of Technology program. He earned a degree in aeronautical engineering, finishing first in his class, in 1959.

In June 1959, McDivitt was assigned to Edwards Air Force Base, California as a student test pilot. He remained at Edwards as an experimental flight test pilot and completed the U.S. Air Force Aerospace Research Pilot School before he joined the Manned Spacecraft Operations Branch in July 1962. By September, McDivitt logged over 2,500 flight hours, over 2,000 of which were jets. In September, he was selected by NASA as part of Astronaut Group 2.

On July 29, 1964, NASA announced that McDivitt would serve as the command pilot for Gemini IV. He was the first American astronaut to take command on his first spaceflight. Only two other Gemini astronauts would command on their first spaceflights: Frank Borman on Gemini VII and Neil Armstrong on Gemini VIII. McDivitt and his pilot, fellow Michigan alumni and Air Force test pilot Ed White, launched into space on June 3, 1965. The 4-day mission saw White perform the first spacewalk by an American as well as 12 scientific and medical experiments.

Following his success with Project Gemini, McDivitt joined Project Apollo. On March 21, 1966, he was announced as the commander of the backup crew for the ill-fated Apollo 1, during which a fire tragically killed astronauts Gus Grissom, Roger Chaffee, and Ed White. McDivitt was later assigned as the commander of the prime crew for Apollo 9, the first deployment of the entire set of Apollo hardware. On March 3, 1969, Apollo 9 took off with both the lunar module and command module for the first time. The mission saw the first successful rendezvous between the lunar module and the command module as well as the first joint operation of two manned spacecraft in flight.

In May 1969, McDivitt became the manager of Lunar Landing Operations, leading the team that planned the lunar exploration program and redesigned the lunar module for the task. He later became the manager of the entire Apollo Spacecraft Program. McDivitt served as program manager for Apollo missions 12, 13, 14, 15, and 16. On February 17, 1972, he was promoted to Brigadier General in the Air Force. Following the conclusion of Apollo 16, McDivitt retired from the Air Force and left NASA in June 1972. He served as a civilian business executive until his retirement in 1995.