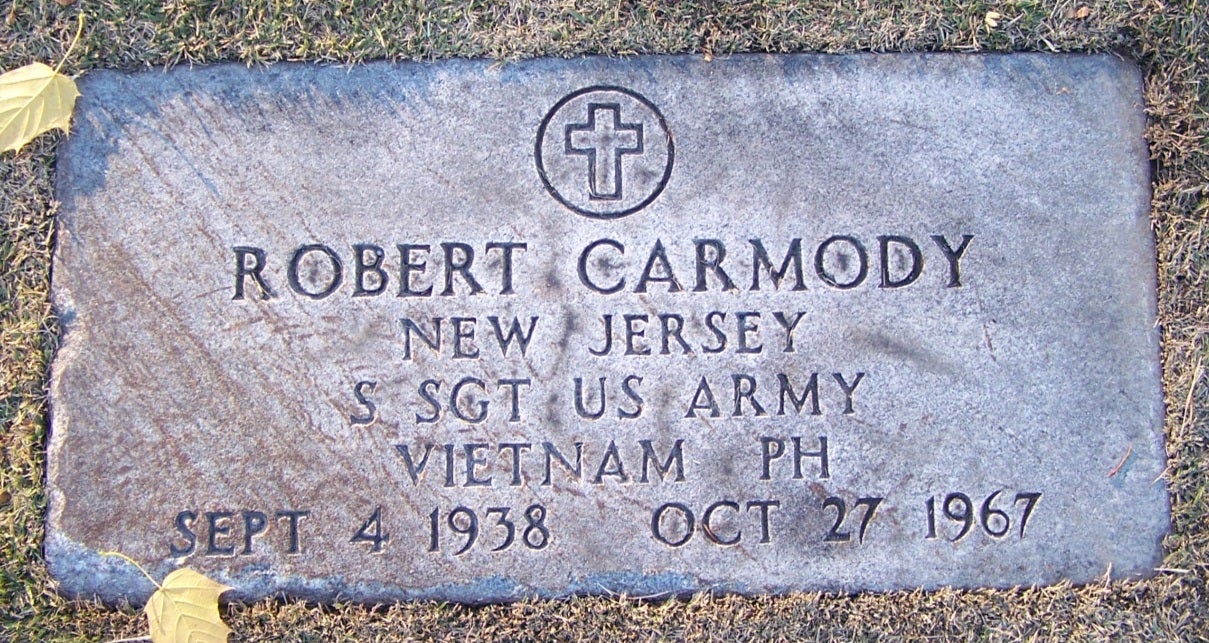 Over 58,000 Americans went to war in Vietnam, never to return to their native soil. Upon arrival in Vietnam, service members found themselves in a dangerous and violent conflict that divided the nation. The black granite wall at the Vietnam Veterans Memorial in Washington D.C. is a solemn reminder of the service members who made the ultimate sacrifice for their country. Robert John Carmody’s name is inscribed on panel 28E, line 79 of this wall.

Staff Sergeant Carmody, a 29-year-old infantryman, arrived in Vietnam in 1967 with Delta Troop, 17th Cavalry Regiment, 199th Infantry Brigade. He and members of his unit conducted patrols in the area around Saigon. Not long after arriving in Vietnam, Carmody died in combat.

Carmody’s death, albeit tragic and premature, would have likely faded into the lists of thousands of other young people killed during the war. This would not be the case, as Carmody had previously achieved a type of celebrity status for his accomplishments in the Olympic boxing ring leading up to his deployment to Vietnam.

Carmody was born on September 4, 1938, in Brooklyn, New York, and later moved to Paterson, New Jersey, where he lived with his aunt and uncle. Carmody learned to fight on the streets as a youth. He joined the Army in 1956, and took up formal boxing classes soon after his enlistment. Carmody joined the 11th Airborne Division in Germany following his graduation from basic training, advanced infantry training and airborne school. There, he proved to be a natural at boxing as he found success in the ring representing the division and greater U.S. Army in various tournaments throughout Europe.

Carmody’s storied Army boxing career continued as he won the first of four All-Army titles in 1961. He followed up this success in All-Army tournaments with a gold medal at the 1962 International Military Sports Council or Conseil International du Sport Militaire (CISM) games in Frankfurt, Germany, and a bronze medal at the 1963 Pan American Games in São Paulo, Brazil.

An upset victory over Melvin Miller at the 1964 Olympic trials finals landed Carmody a spot on the U.S. Olympic Boxing Team. The 5-foot-2 and 112 pound Carmody fought in the flyweight division. He was teammates and close friends with Olympic gold medalist and future world heavyweight champion, Joe Frazier. Several sources close to the two fighters claim that Carmody talked Frazier into continuing his boxing career after a disappointing loss in the amateurs.

At the Tokyo Games, Carmody defeated Nam Singh Thapa of Nepal and Otto Babiasch of Germany, on the way to a semifinals showdown with Italy’s Fernando Atzori. The Italian dashed Carmody’s hopes for a gold medal, beating him in a split decision contest.

Carmody did not turn professional after his success in the Olympic Games. Now with several years in the service, he opted to remain in the Army to finish his career. Through a CISM program, he coached the Iraqi boxing team for two summers in Baghdad. Carmody was set to join the Army Boxing Team as an assistant coach in February 1968.

Carmody’s selection as a coach on the Army Boxing Team could have kept him out of combat. His sense of obligation to serve in Vietnam stemmed from a desire to follow in the footsteps of numerous friends and fellow soldiers who went to war. As an Army boxer, Carmody received limited infantry training. His friends begged him to find a way not to go to war. Influential friends, including future Muhammad Ali business manager Gene Kilroy, expressed their reservations to Carmody. These pleas fell on deaf ears as Carmody prepared to deploy to Vietnam.

Carmody arrived in Vietnam on October 4, 1967. On October 27th, just weeks after arriving in Vietnam, Viet Cong forces ambushed Carmody’s patrol near Saigon. He and his fellow soldiers engaged the enemy in an eleven hour firefight without reinforcements. Enemy small arms fire ultimately led to the death of Carmody and five other men on the patrol. For his heroic actions, Carmody received the Bronze Star Medal with “V” Device (valor).

Carmody left behind a wife, Mary, and two young children. Terri Lynn was two years old, and his son Robert Jr., born on the day his father left for Vietnam, was only three weeks old at the time of his death.

Family, friends and members of the military and boxing communities, including his Olympic teammate Joe Frazier, attended Carmody’s funeral service in Paterson. He was buried with full military honors in Paterson’s Calvary Cemetery.

Newspapers from across the United States responded to Carmody’s death with printed tributes for the fallen Olympian. For many years after his death, those who knew Carmody continued to express their respect and admiration for him. In a 2006 interview, Joe Frazier told ESPN, “He’s the kind of guy you really need,” Frazier said of Carmody. “I had some hard times, things was rough, but he was a guy that helped you out a lot. I loved him like a brother.”

Gene Kilroy claimed that great fighters need to have brains, speed and guts. “He was the real deal, he had all three,” Kilroy said of Carmody. “He was the greatest lightweight the military ever had.”

English author Terry Pratchett wrote, “A man’s not dead while his name is still spoken.”

With the anniversary of his death upon us, it is only appropriate that we “say his name,” in remembrance of a patriot who represented his country in the boxing ring and made the ultimate sacrifice for his country on the battlefield.