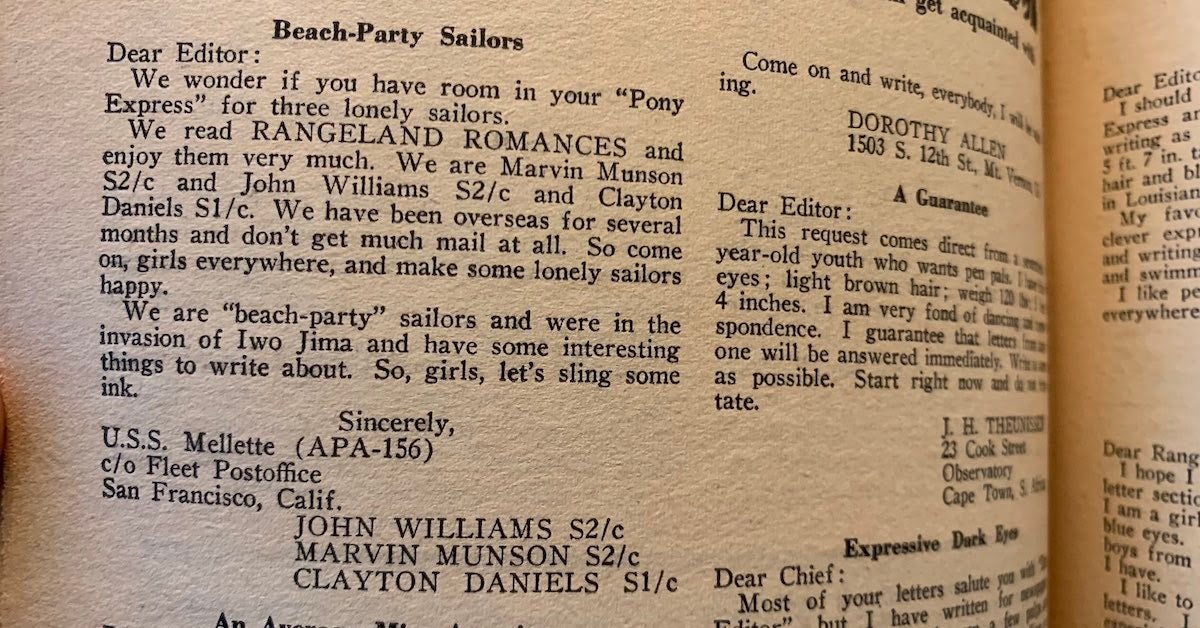 In January 1946, a rather amusing wanted ad was published in the pulp comic book Rangeland Romances. “Three lonely sailors” of the USS Mellette sent in a request for pen pals that seems like it would have been hard to ignore.

The USS Mellette (APA-156) was a Haskell-class attack transport commissioned Sept. 27, 1944, conducting a series of training operations in the Pacific before she got underway for Iwo Jima on Jan. 27, 1945. She participated in the initial assault on Feb. 19, unloading supplies and taking on casualties. She would remain active in the Pacific, including Okinawa, Saipan, and Nagasaki, until she finally witnessed the official surrender of Japan in Tokyo Bay on Sept. 2, 1945. In June, 1946, she was decommissioned and entered into the Reserve Fleet at Yorktown, Virginia.

The Beach-Party Sailors’ letter was shared on Twitter by Vera Herbert, Writer and Co-Executive Producer of This is Us, a show that has taken great effort and care toward telling military stories. It’s no wonder, then, that she would get excited over this treasure of an ad:

We wonder if you have room in your “Pony Express” for three lonely sailors.

We read RANGELAND ROMANCES and enjoy them very much. We are Marvin Munson S2/c and John Williams S2/c and Clayton Daniels S1/c. We have been overseas for several months and don’t get much mail at all. So come on, girls everywhere, and make some lonely sailors happy.

We are “beach-party” sailors and were in the invasion of Iwo Jima and have some interesting things to write about. So, girls, let’s sling some ink.

Whether those frisky sailors ever heard from Rangeland Romances readers is tough to say, but I’m with Herbert in hoping they found love through the pages of pulp comics.

They’re not the only service members who appreciate letters from home. One military spouse, Army wife Christina Etchberger, set up a pen pal program so people can write to veterans during the COVID-19 pandemic.

Anyone who wants to is invited to write a letter to a veteran. Etchberger encourages pen pals to include thin objects like photos, cards, crafts, stickers, postcards, stamps, or seed envelopes and write a little something about yourself on the back (for example, Etchberger’s son wrote “looking for a pen pal who likes planes!”). Keep the letter positive and avoid controversial topics.