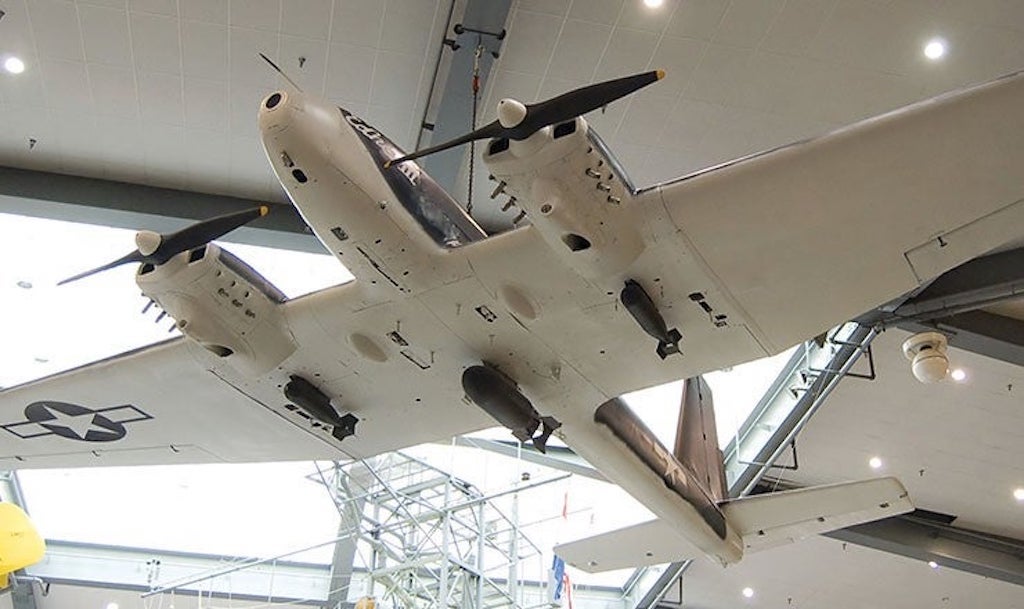 Unmanned aerial vehicles, or drones, are often thought of as a 21st century battlefield technology. Target drones are sometimes associated with early missile testing during the latter half of the 20th century. However, the Navy’s first combat drone was actually deployed in the Pacific during WWII.

In the early 1940s, the invention of the television and radar altimeter made the concept of a remotely piloted aircraft, armed with a bomb or torpedo, a real possibility. In January 1942, the Naval Air Factory was tasked with creating such an aircraft. With America’s entry into WWII, development was accelerated and permission for the construction of a prototype was granted the next month.

Classified as an assault drone, the TDN-1 was made primarily of wood and could be controlled with either radar or television guidance. A conventional cockpit for an onboard human pilot could also be fitted in place of the guidance equipment for test flights. Designed to be cheap to produce, the TDN-1 utilized fixed tricycle landing gear.

In March 1942, 100 TDN-1s were ordered. However, the drone was found to be too complicated and expensive for operational use. The project was canceled and some built aircraft were expended as target drones. Still, the TDN-1 is credited as the first American drone to take off freely from an aircraft carrier, the USS Sable (IX-81). Following the cancelation of the TDN-1, funds were reallocated to the more promising TDR-1.

Manufactured by Interstate Aircraft, the TDR-1 was a competing assault drone design contracted by the Navy. Like the TDN-1, the TDR-1 could be fitted with a conventional cockpit for a human pilot to perform test flights. Similarly, operational control would be remotely performed by an operator aboard a control aircraft. The operator would fly the drone using a tv screen displaying footage from the drone’s onboard camera and a radar altimeter readout.

The TDR-1 utilized a simple design. Its steel-tube frame, constructed by the Schwinn Bicycle Company, and molded wood skin was cheap and easy to manufacture. Moreover, its tricycle landing gear could be jettisoned after takeoff to improve flight performance. In September 1942, the Navy selected DeKalb, Illinois as the manufacturing site for the TDR-1 and built an airport there. The city was chosen because Wurlitzer, a piano manufacturer with expertise in wood products, was located in DeKalb.

Just under 200 TDR-1s were built and tested at the new airport before they were shipped to the South Pacific. The original contract, under the codename Operation Option, called for 1000 drones to facilitate the formation of up to 18 assault drone squadrons. However, development delays reduced the project’s priority and cut final production numbers. A TDR-1, designated XBQ-4, was tested by the Army Air Force but did not result in a production contract.

In 1944, the TDR-1s were deployed in the South Pacific under the Special Air Task Force. In July, SATFOR conducted additional testing on the aircraft including a strike on a captured Japanese freighter controlled by a TBM Avenger from 7 miles away. Special Task Air Group 1 was assigned the assault drones for operational use along with TBM Avengers for control aircraft.

On September 27, 1944, STAG-1 completed the first operational TDR-1 mission, successfully conducting a bombing run on Japanese ships. However, persisting technical problems and the advancement of more conventional weapons led to the cancelation of the assault drone program. In total, 50 drones were expended during combat operations with 31 successfully striking their targets and zero pilot losses in the air group. The final TDR-1 mission was flown on October 27, 1944.

Today, a single intact example of the TDR-1 is on display at the Navy’s National Naval Aviation Museum in Pensacola, Florida. However, the DeKalb Airport has also acquired a TDR-1 fuselage. Roger Keys, a local DeKalb TDR-1 expert and historian, also has other parts in his collection including wings, a canopy, landing gear, and propellers. “Some day we hope to have a TDR-1 drone display at DeKalb Taylor Municipal Airport,” the city said in a news flash.