These London railings are actually WWII stretchers - We Are The Mighty 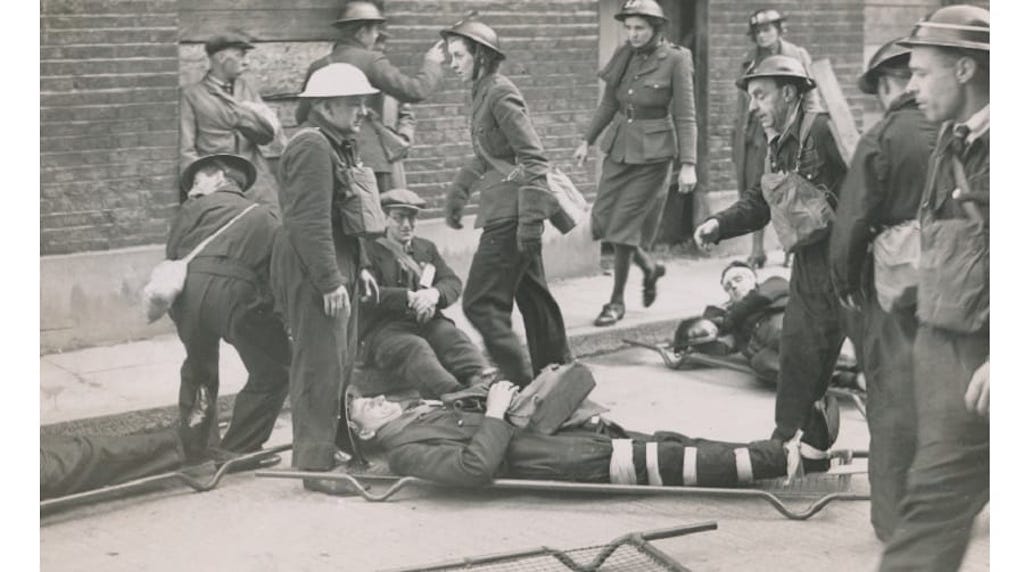 A metal stretcher during an ARP exercise in 1940. Note the curve sections at the ends of the poles (Public Domain).

From September 1940 to May 1941, the German Luftwaffe conducted a massive bombing campaign against Britain. Commonly referred to as the Blitz, these attacks included industrial targets as well as towns and cities. London was hit especially hard, receiving more bomb tonnage than the rest of the country combined. Over 40,000 British civilians were killed by German bombing during the war, with nearly half of them in the capital. As a result, Air Raid Precautions workers were heavily focused in London. Even before the Blitz, Britain made preparations for war. Precious metal that wasn’t used to produce military equipment was turned into all-metal stretchers for ARP, later renamed the Civil Defense Service. Unlike traditional stretchers made of wood poles and canvas, these metal stretchers could be more easily mass produced. Moreover, the metal construction allowed the stretchers to be cleaned in the case of a chemical gas attack. Over half a million of the stretchers were produced before World War II began.

During the Blitz, these stretchers proved invaluable to the ARP workers who rescued people in the wake of Luftwaffe bombings. Although the wire mesh would have been less comfortable for victims than traditional canvas, the sturdy construction kept them serviceable night after night. This was crucial as, from September 7, 1940, London was bombed 56 of the following 57 days and nights.

After the war, Britain began the long process of rebuilding. In London, many housing estates lost their metal railings to raw material collections for the war effort. With the war over, thousands of metal stretchers were, thankfully, unneeded. As a quick-fix, London County Council began repurposing these stretchers as metal railings.

The stretchers were installed without any modification, retaining their curved handles which kept them off the ground and made them easier to lift up. Today, these former emergency stretchers can be still be seen in London estates like Peckham, Brixton, and Deptford. Although some of these pieces of history have been removed as they were worn by the elements, the Stretcher Railing Society was formed to catalog and preserve them for the future.