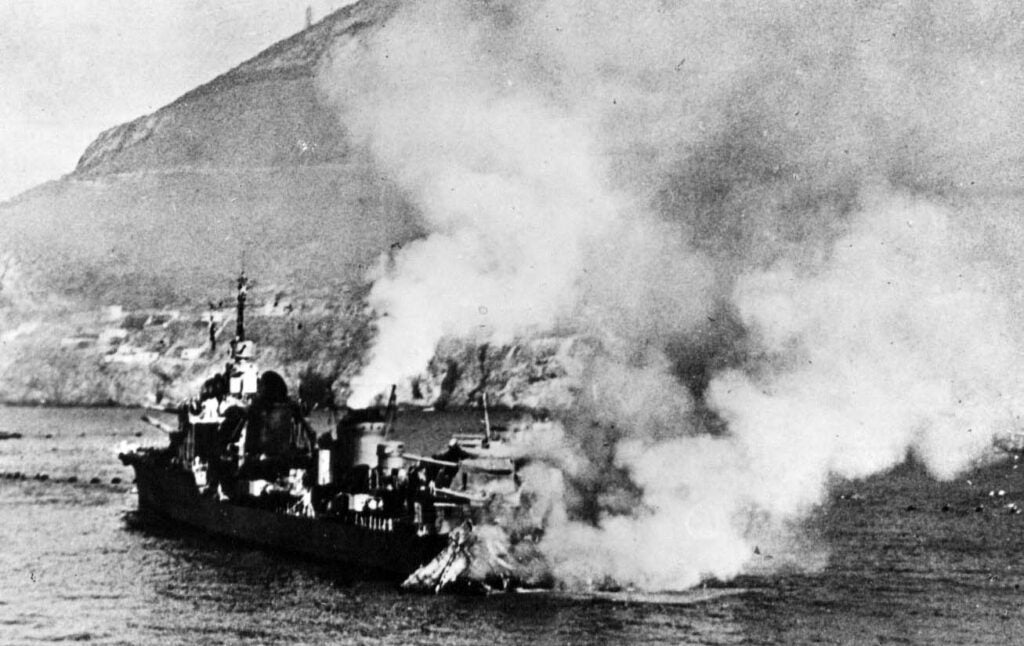 In 1940, Hitler and the Nazis rolled up western Europe, culminating with the Fall of France. The capitulation of the French government left Britain alone to stand against the Nazis. However, the French Atlantic Fleet in the Mediterranean remained largely untouched. Although the Royal Navy had no equal on the seas, the addition of the French ships to the German fleet would pose a serious threat to Britain.

While the French-German armistice specifically stated that Germany had no intention of making demands regarding the French fleet, Britain did not see this as a guarantee. After all, the Nazis were not exactly known for keeping their word. On June 24, 1940, French Admiral François Darlan assured British Prime Minister Winston Churchill that the French fleet would not fall into German hands. Unconvinced, Churchill demanded that the French Navy be assimilated into the Royal Navy or be neutralized so as to prevent its use by the Axis.

At the suggestion of Italy, the French-German armistice was amended to allow the French fleet to remain in North Africa where it could be seized more easily by Italian troops stationed in Libya. This was the last straw for Churchill who had a contingency plan drawn up. Operation Catapult was a Royal Navy operation with one goal: to eliminate the French fleet.

Despite the British fears of Germany seizing the French ships, Hitler too had reservations. The armistice with France was contingent on their control of their ships. A forced takeover of the French fleet could drive them to defect to the British. On the French side, Darlan ordered the French Atlantic fleet to Toulon to demobilize. Additional orders were issued to scuttle the fleet if the Germans tried to take them by force. Still, Britain saw the risk of leaving the French ships alone to be too great.

On July 3, British forces at Gibraltar delivered an ultimatum to the French fleet at Mers El Kébir in French Algeria: join with the Royal Navy or be sunk. The ultimatum applied not just to the ships at Mers El Kébir, the strongest concentration of the French fleet in the Mediterranean, but to those in British ports at Plymouth and Alexandria in Egypt. These ships, including battleships and the largest submarine in the world at the time, were boarded without warning and neutralized. Three British sailors and one French sailor were killed in the seizures.

Although negotiations continued at Mers El Kébir, the British readied their strike force. The battlecruiser HMS Hood, battleships HMS Valiant and Resolution, along with the aircraft carrier HMS Ark Royal and her escort of cruisers and destroyers had all been assembled to carry out Operation Catapult. The British ships had heavier armament and the advantage of being able to maneuver. By contrast, the French ships were anchored and could not immediately bring their guns to bear. Moreover, any fighting would begin with a surprise attack that the French were not expecting.

At 5:54pm, Churchill ordered the Royal Navy to open fire on the French fleet. The first British salvo began at a distance of just under 10 miles. Their third salvo scored a direct hit on the battleship Bretagne and detonated her magazine. She sank with 977 of her crew at 6:09pm. Although the French returned fire, they were heavily outgunned. After 30 British salvos, the French ships ceased fire. Two French battleships, Provence and Dunkerque were damaged and ran aground along with three destroyers. Meanwhile, the British ships were forced to change course to avoid incoming fire from the French coastal forts.

Although French reinforcements were called in from Algiers and Toulon, the ships did not arrive in time to join the battle. However, French planes did engage with British planes over Mers El Kébir. French Curtiss H-75 fighters attacked Royal Navy planes dropping mines in the harbor exit and shot down one Blackburn Skua with the loss of two of its crew, the only British fatalities at Mers El Kébir. Despite the mines, French battleship Strasbourg, three destroyers, and one gunboat escaped the harbor and sailed for open sea.

Swordfish attack planes from Ark Royal pounced on the fleeing French ships which responded with anti-aircraft fire. Two British planes were shot down, but their crews were recovered safely. A French flying boat also engaged a British destroyer but caused no fatalities. Although British ships gave chase and another aerial attack was made, Strasbourg escaped to Toulon on July 4. The French gunboat was damaged by shells from light cruise HMS Enterprise and was sunk by submarine HMS Pandora on July 4.

Outraged by the attack, the French ordered an airstrike on Gibraltar. The French Air Force carried out a small night raid on July 5 that was largely ineffective. Most of the French bombs landed in the ocean. However, the fighting was not yet over. Dissatisfied with the damage inflicted on Dunkerque and Provence, the British executed Operation Lever to finish off the French ships on the morning of July 8. Swordfish took off from Ark Royal armed with torpedoes. They scored a direct hit on the patrol boat Terre-Neuve, moored alongside Dunkerque, which was packed full of depth charges. The patrol boat exploded and caused heavy damage to the French battleship. At Dakar, a second Swordfish attack from HMS Hermes seriously damaged the battleship Richelieu.

After Operations Catapult and Lever, Churchill wrote, “This was the most hateful decision, the most unnatural and painful in which I have ever been concerned.” The attacks severely strained British-French relations and provided Germany with powerful propaganda that revived anglophobia in France. However, the attacks also demonstrated Britain’s resolve to fight on and rallied the British Conservative Party around Churchill.

Moreover, despite condemnation from Spain and Switzerland, the action was received favorably by allied nations, including the United States. President Roosevelt himself told the French ambassador that he would have done exactly as Churchill did. In total, 1,297 French sailors were killed with another 350 wounded. Crucially, 1 battleship was sunk with another 2 damaged beyond use. The controversial attack is still debated by historians, but its demonstration of British resolve and impact on the United States to continue supporting Britain is largely agreed upon.