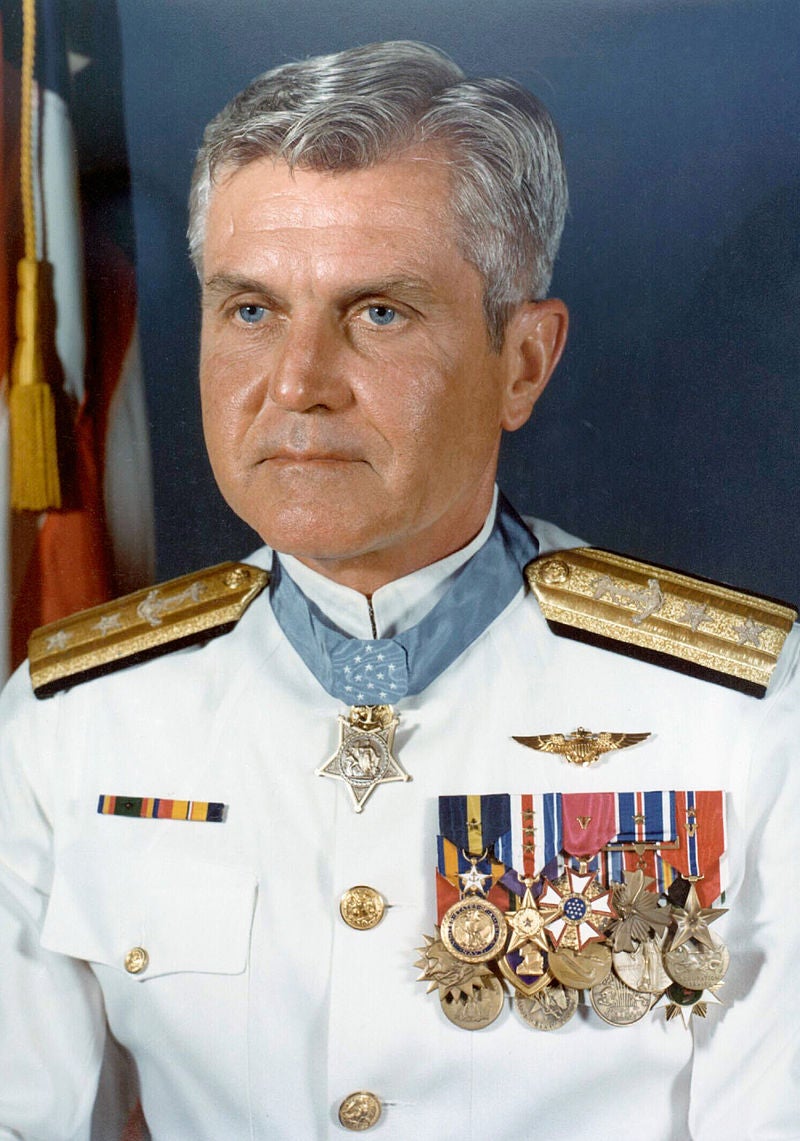 “I will never surrender of my own free will. If I am captured I will continue to resist by all means available. I will make no oral or written statements disloyal to my country and its allies or harmful to their cause.”

These statements, and others, are part of the Six Articles of the Code of Conduct. Applying to all members of the U.S. military, the Code of Conduct provides guidance to service members on the battlefield and in the event that they become a prisoner of war. During the Vietnam War, one American sailor exemplified the code like no other.

James Bond Stockdale (yes, that was his real name) began his naval career as a surface officer. Following his graduation from the Naval Academy in 1947, Stockdale served primarily on destroyers.

In 1949, Stockdale was selected for naval flight training. The next year, he was designated a Naval Aviator. He trained at Pensacola, Corpus Christi and Norfolk. In 1954, Stockdale was accepted into the Navy’s Test Pilot School at Patuxent River and completed the training in July of that year. As a test pilot, Stockdale tutored Marine Aviator and future first American to orbit the Earth John Glenn.

In 1959, Stockdale attended Stanford University and earned a Master of Arts in international relations. Though he preferred flying fighter planes to studying textbooks, Stockdale later credited Stoic philosophy with helping him get through his time as a POW in the Vietnam War.

On August 2, 1964, USS Maddox (DD-731) engaged three North Vietnamese P-4 torpedo boats in the Tonkin Gulf. When the ships broke contact, four F-8 Crusader fighters from USS Ticonderoga (CV-14) engaged the torpedo boats. As commander of VF-51 (Fighter Squadron 51), Stockdale led the attack on the boats. Although none of their rockets connected, they scored multiple hits with their 20mm cannons. Two nights later, Stockdale again flew overhead during a second reported attack. However, he later recounted that there were no enemies in the area. “[I] had the best seat in the house to watch that event, and our destroyers were just shooting at phantom targets…There was nothing there but black water and American firepower.”

The next morning, August 5, 1964, President Johnson ordered bombing raids on North Vietnamese military targets. When Stockdale was informed of the retaliatory strikes, he responded by asking, “Retaliation for what?” During his time as a POW, Stockdale constantly feared that he would reveal his knowledge of the controversial Gulf of Tonkin Incident.

On September 5, 1965, Stockdale flew a mission over North Vietnam from the USS Oriskany (CV-34). His A-4 Skyhawk was hit by enemy fire and disabled, forcing him to eject. He landed in a small village, was badly beaten and taken prisoner. For over seven years, Stockdale was held at the Hỏa Lò Prison, better known as the infamous Hanoi Hilton.

As the senior naval officer in the prison, Stockdale was one of the primary organizers of American POW resistance. He created and enforced the Code of Conduct for his fellow prisoners. This included their behavior under torture/interrogation, secret communications and even planned escape attempts. All of this made Stockdale a favorite of North Vietnamese interrogators who knew that the high-ranking aviator would have valuable information.

During his time in captivity, Stockdale was routinely beaten and denied medical care for his leg which was severely broken during his capture. Stockdale’s leg would be broken twice during his time at the Hanoi Hilton. Whenever he was caught with information that could implicate his fellow prisoners, he would slit his own wrists so that he could not be tortured into confessing. Still, his most famous act of defiance came in the summer of 1969.

Stockdale was locked in a bath stall and chained in leg irons to be tortured and beaten. His captors told him that he was to be paraded in public and made an example of. To keep from being exploited, Stockdale used a razor and slit his own scalp. Disfigured, the North Vietnamese wouldn’t be able to use Stockdale for their propaganda. When his captors tried to cover his head with a hat and salvage their exploitation, Stockdale used a stool to beat his own face swollen beyond recognition. As a result, the North Vietnamese gave up on trying to exploit him for propaganda.

On Feb. 12, 1973, Stockdale was released as a POW during Operation Homecoming. Three years later, he received the Medal of Honor for his actions and leadership in captivity. Although his injuries as a POW prevented him from returning to flight status, Stockdale remained in the Navy and made Vice Admiral before retiring in 1979.

Today, Stockdale’s exemplary resistance in captivity is used as a model for SERE School students learning the Code of Conduct.