The Tommy Gun lived up to its original name: The Annihilator - We Are The Mighty

The Tommy Gun lived up to its original name: The Annihilator 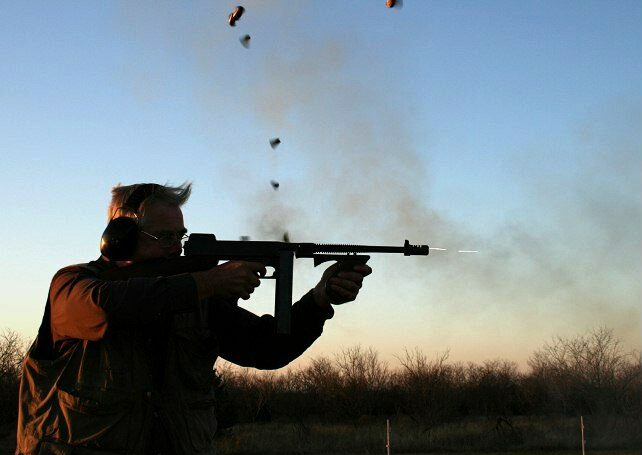 But many will argue it was the best submachine gun ever put in the hands of fighting men – whether they were “good guys” or “bad guys.”

Well-made, robust, capable of firing more than 800 rounds a minute in some models and chambered for the man-stopping .45-caliber ACP round, the gun lived up to one of its original names: The Annihilator.

“I knew several soldiers who used Thompsons for special operations in Vietnam,” said Alan Archambault, a retired U.S. Army officer and former supervisory curator for the U.S. Army Center of Military History. “Even in the 1960s, the Thompson was still an iconic weapon for U.S. soldiers. Often when one soldier would rotate to the U.S., he would pass the Thompson on to another soldier in theater.”

The brainchild of Gen. John T. Thompson, a former chief of small arms for the Ordnance Department and firearms designer, the stalemate on the Western Front during The Great War (a.k.a. World War I) convinced him the ordinary infantryman needed a new weapon. Thompson wanted something he called “a trench broom.”

“Our boys in the infantry, now in the trenches, need a small machine gun, a gun that will fire 50 to 100 rounds, so light that he can drag it with him as he crawls on his belly from trench to trench, and wipe out a whole company single-handed,” Thompson wrote in a 1918 memo to firearms designers. “I want a little machine gun you can hold in your hands, fire from the hip and reload in the dark. You must use ammunition now available and I want it right away.”

Designers produced a prototype by 1919, but the first practical models were too late for the war. Still, Thompson convinced Colt to produce 15,000 M1921 submachine guns.

Early observers of the M1921 test-fired on the range were impressed by how much firepower the “little machine gun” delivered.

The problem was Thompson had no steady stream of customers, even when Thompson’s company Auto-Ordnance Corp. released the M1928 – considered by many the definitive Tommy gun model.

True, the U.S. Marine Corps purchased Thompsons and used them effectively in China and during the Latin American “banana wars” of the 1920s. The Postal Service armed its security personnel with Thompsons as well.

But the weapon was expensive – very expensive. Adjusted for inflation, its $200 price tag is roughly equivalent to $2,300 today.

To put things in perspective, consider the contemporary cost of prime, high-end arms like the Fabrique Nationale d’Herstal SCAR 17S 7.62×51 millimeter NATO – it costs about the same as a Tommy Gun did during the Roaring ’20s.

Besides, for better or worse the Thompson gained a “bad boy” reputation. A handful of criminals such as John Dillinger and George “Machine Gun” Kelly gave the weapon a bad name.

At first, potential customers such as the British government considered the Thompson “gangster weapons” and refused to purchase the submachine gun.

But by 1939, all that changed. Great Britain entered World War II starved for armaments.

The War Office eagerly purchased every M1928 it could, and the weapon was a hit with the Tommies – particularly the Commandos.

The weapon’s reliability and ability to bring devastating automatic fire to close quarters combat made the Thompson a favorite of the Commandos.

They even honored the weapon in the design of their unit recognition flash: A stylized Thompson superimposed on an anchor headed by an eagle.

There were also many American G.I.s who even relished the gangster panache of the Tommy Gun. Images of actors like James Cagney in “The Public Enemy” – easily one of the most violent movies of its time – ducking around a corner as a gangster fired on him with a Thompson were unforgettable.

“It was often seen in gangster films that were watched by impressionable young men who came of age during World War II,” Archambault said.  “So, even before its use in World War II, it was an iconic weapon.”

Sure, the M-1 Garand was the basic weapon for the American infantryman. But the Thompson found its way into the hands of officers, squad leaders, paratroopers, U.S. Marines and any soldier lucky enough to grab one.

Also, G.I.s and Marines were fighting all across the globe in battlefield environments that included deserts, jungles and snow. The sheer reliability of the Thompson, particularly in its less-expensive but equally deadly M1A1 model, made it the perfect weapon to endure the lousiest battlefield conditions.

Eventually, the cost of the Thompson prompted development of the M-3 “Grease Gun,” which could be produced in greater quantities for far less money than even the M1A1.

But by the Korean War, the Army relegated the Thompson to a secondary role. By Vietnam, the first M-16s were in the hands of GIs and the military considered the Thompson obsolete.

Today, Thompson submachine guns are in high demand among collectors legally authorized to own full-auto weapons. On average, the price for a clean Tommy Gun is about $25,000.