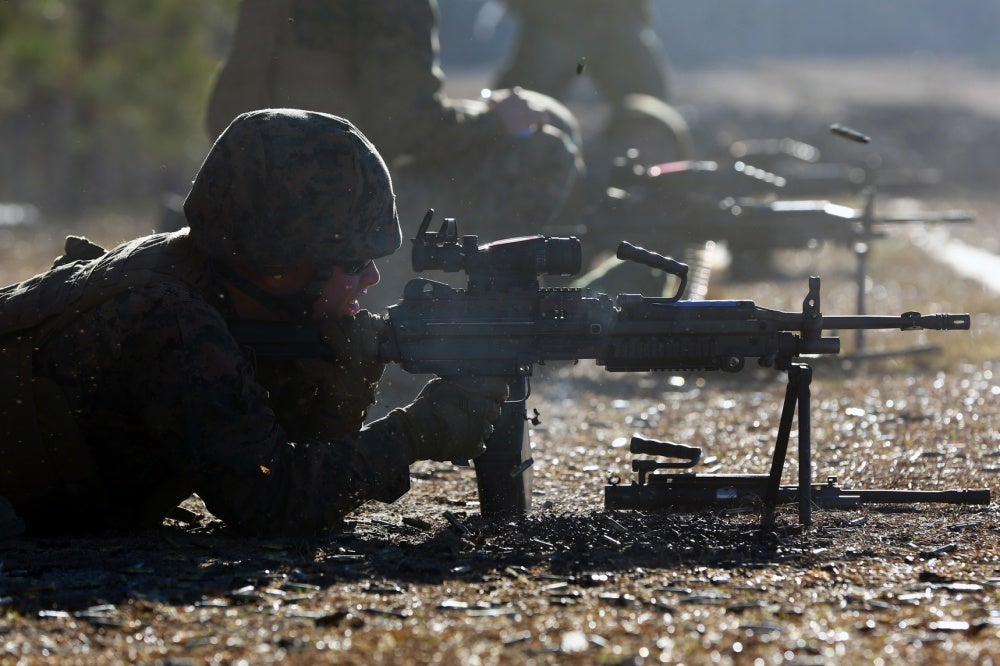 The M249 Squad Automatic Weapon is a Marine Corps favorite because it can suppress the enemies of freedom at the max rate of 800 rounds of democracy per minute. The max range of 3,600 meters is enough to reach out and touch the enemy – and for the Corps to forgive the heresy that the Army had her first. The M249 SAW served as the light machine gun of choice for the Marine fire teams since the 1980s. The commanders of today want to put this ol’ gal out to pasture but the Marine Corps infantry will always love the M249 SAW.

For the sake of brevity let’s disregard the weapon was designed in the 1970s but implanted in the 1980s. Anyone who has fired the weapon can attest to the euphoria of holding down the trigger of this belt-fed beauty at the cyclic rate. She saw action in the Gulf War, Somalia, Bosnia and Kosovo. She was the queen bee in Iraq and Afghanistan. The millennial generation of war fighters patrolled the mountains of the Korengal valley with her. Troops cleared the streets of Fallujah and dominated the sands of Helmand province with this piece of American engineering. When the M249 SAW sings, she retakes the initiative from the insurgency with overwhelming fire power. The SAW is to OIF/OEF era Marines what the M60 is to Vietnam era devil dogs.

The weapon system comes with an additional barrel to provide a sustainable rate of fire without melting the barrel. Barrels of other SAWs should not be interchanged due to head spacing of each individual weapon system. A machine gunner can carry a combat load of 600 rounds of ammunition and, the Assistant Gunner, who can carry an additional combat load as well. It is considered light weight at 18 lbs, yet the weight adds up on patrol. If the Gunner and A Gunner run out of linked ammunition the M249 SAW can use M16 magazines. The versatility of this weapon provides an adequate base of fire for fire teams to maneuver, close with, and destroy the enemy. With proper maintenance and a well-trained trigger puller, officers can rest assured that they can employ a fireteam with this weapon to lethal effect.

Why put a suppressor on it? Because, that’s why. Many moons ago, when I was young boot PFC, my unit held a machine gunner competition. The final event was to saw a 2×4 in half with…the SAW. That’s the best thing about this weapon, there is so much ammo for it. In 2012, 1st Battalion, 9th Marines received the M27 or the Infantry Automatic Rifle (IAR) as part of the Marine Corps’ wide survey. It was up in the air at the time whether the IAR would replace the M249 SAW or replace M16 series all together. While the IAR was less prone to jams and easier to maintain, it did not provide the same level of suppression as it’s predecessor. The Squad Automatic Weapon will be phased out eventually by newer technology but the Marine Corps infantry will always love it anyway. Flaws and all.