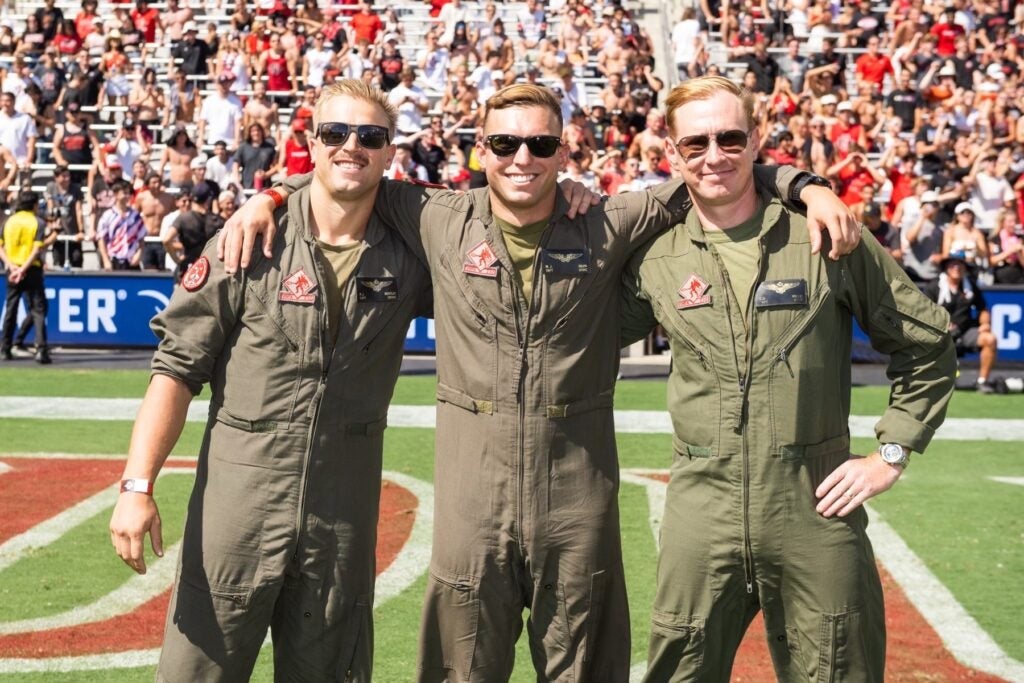 On September 3, 2022, the San Diego State University Aztecs played their first football game at the school’s brand new Snapdragon Stadium. To celebrate the momentous occasion, the stadium received a flyover of two Marine F/A-18 Hornets. Fittingly, one of the aviators who took part in the flyover was an SDSU alumni.

Capt. Christopher “Vlad” Willis began his Marine Corps career on the enlisted side. After rising to the rank of Staff Sergeant, he was accepted into the Marine Enlisted Commissioning Education Program and attended SDSU where he majored in Financial Services. Willis commissioned as a 2nd Lt. through the San Diego NROTC program in 2014. He attended The Basic School at Marine Corps Base Quantico, Virginia in July of that year before reporting to Naval Air Station Pensacola for flight training in early 2015.

Since joining the Red Devils, Willis has participated in the 10-day air combat training exercise known as Red Flag-Alaska, deployed to Japan and Guam supporting operations in the Indo-Pacific region, and has logged over 660 flight hours. Of course, one of the most notable moments in Willis’ career was the historic flyover of Snapdragon Stadium.

“We don’t typically get to do a lot of flyovers because of operational commitment,” Willis told WATM. However, while scrolling through a list of Headquarters Marine Corps-approved flyovers, Willis found the Snapdragon Stadium flyover and immediately reached out to get Hornets for SDSU’s first game there. However, the flyover wouldn’t be as simple as taking two F/A-18s from Miramar and flying them south along I-15 and over the stadium.

“Since they tore down Qualcomm [Stadium] and built Snapdragon, they actually changed the orientation of the field from east/west to north/south,” Willis noted. “This is a big deal in Class Bravo airspace over San Diego because it’s extremely busy airspace.” It took extensive coordination and collaboration between the 3rd Marine Aircraft Wing and the FAA to approve the flight plan for the flyover. Willis highlighted that the plan served as a testbed proving that a flyover of the new stadium could be accomplished with minimal interference to surrounding air traffic.

The two-ship formation of F/A-18s was led by Capt. Austin “Cartman” Bentley and his Weapons Systems Officer, Capt. Mike “BJ” Silvia, with Willis flying as his wingman. The Marines used simulators to work out the timing and synchronization of the flyover to ensure that everything went smoothly for game day. At low altitude, the Hornets flew south over the stadium with a jubilant crowd cheering them on below. “It was an amazing experience,” Willis recounted. “To go back and support our school…was really a great experience.”

After their flyover, the Marines landed at nearby Brown Field Municipal Airport and drove up to the stadium in time for halftime. During the third quarter, Willis, Bentley, and Silvia were brought out onto the field and recognized for their flyover performance. At the game, a gentleman approached the Marines with his daughter who wants to be a fighter pilot. “We said, ‘She can absolutely do it…if you work hard you can do the same thing we’re doing,’” recalled Willis. “It was great to walk around and talk with the community.” When asked what advice he would give anyone else with a dream of flying, Willis said, “The only limitation you have is how big you can dream…hard work and doing the research is how you make it happen.”