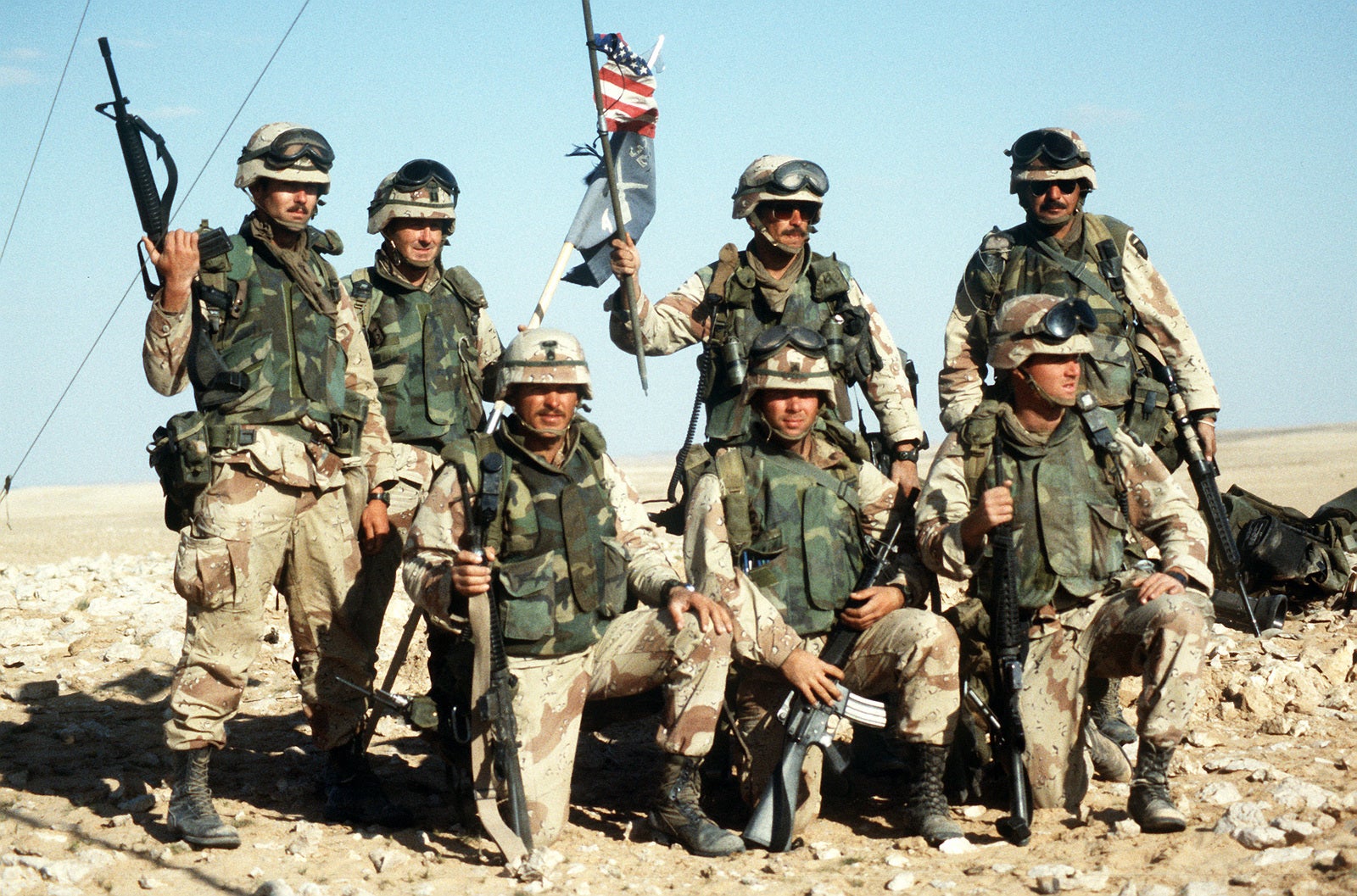 America’s ground supremacy in the 21st century is due primarily to the “Big Five” Army acquisition of the 20th century. These five systems, although designed and procured with fighting the Soviets in mind, first proved their combined might in the Middle East during Operation Desert Storm. Despite being built to stem a communist tide in the Fulda Gap of Germany, these five systems were instrumental in pushing the Iraqi Army out of Kuwait in 1991 and then toppling the Iraqi regime in 2003.

The M1 Abrams is to the Army what the F-15 Eagle is to the Air Force: iconic. Since the Marine Corps divested its tanks in 2020, the Army is now the sole American operator of the Abrams. Built to slug it out with Soviet T-72 and T-80 tanks, the Abrams entered service in 1980 to replace the M60 Patton tank. Despite being one of the heaviest tanks in modern service, its multi-fuel turbine engine can propel it to a limited top speed of 45 mph. Originally equipped with a 105mm rifled main gun, the M1A1 tanks that took part in Desert Storm were upgraded to a 120mm smoothbore main gun that fired an armor-piercing fin-stabilized discarding-sabot round. Combined with advanced Chobham composite armor, night vision optics, and modern rangefinders, the Abrams easily outclassed the Iraqi T-55, T-62, and T-72 tanks. Of the nine Abrams tanks destroyed during Desert Storm, seven were destroyed by friendly fire. The other two were scuttled to prevent their capture after being damaged. Abrams tanks were also used in the Iraq War where they saw more close-quarters urban fighting in support of infantry house-to-house clearing operations.

The M2 Bradley had a troubled development. It was mainly a response to the Soviet BMP infantry fighting vehicles which served as both armored personnel carriers and tank-killers. The existing M113 armored personnel carrier lacked offensive capabilities in its troop-carrier configuration and was too slow to keep up with the new M1 Abrams tank. The Bradley was given the M242 25mm autocannon for its main gun and a compliment of 2 TOW anti-tank missiles. To increase its survivability, it was also outfitted with spaced laminate armor. However, in making the Bradley more lethal, the Army sacrificed the vehicle’s cargo capacity and it could only carry six passengers in addition to its crew of three. Still, the Bradley served as an excellent scout and fighting vehicle during Desert Storm. During the 100 hours of ground combat, the Bradley actually destroyed more Iraqi armored vehicles than the Abrams. 20 Bradleys were destroyed—three by enemy fire and 17 by friendly fire. During the Iraq War, the Bradley proved to be more vulnerable to IEDs and close-quarter RPG attacks and was given upgraded reactive armor. Though Bradley losses rose, crew and passenger casualties remained relatively light.

Designed to replace the Vietnam-era AH-1 Cobra, the AH-64 Apache entered service with the Army in 1986. Armed with the M230 30mm chain gun and capable of carrying a combination of AGM-114 Hellfire missiles and Hydra 70 2.75-inch rockets, the Apache was built as a tin-opener for Soviet tanks. Its first action was in Panama during Operation Just Cause. General Carl Stiner, the operation’s commander, praised the Apache for its ability to deliver precision fire. “You could fire that Hellfire missile through a window from four miles away at night,” he said. It also was the Apache that fired the first shots of Operation Desert Storm. On January 17, 1991, eight Apaches flew over the desert at low altitude and destroyed an Iraqi radar station. The attack opened a gap in the radar network that allowed the first Coalition air strikes to hit with surprise. 277 Apaches took part in the war and destroyed 278 tanks in addition to numerous other Iraqi vehicles. One Apache was lost after it was hit by an RPG, though the crew survived. A deadlier threat to the Apache was the desert sand. Built to fight in Europe, the early Apaches had no engine filters for the fine particulates. Ground crews came up with the ingenious solution of covering up the engines with pantyhose on the ground. With the addition of advanced optics and weapons management systems, the Apache has become one of the deadliest battlefield implements of the 21st century.

The UH-60 Black Hawk entered service in 1979 to replace the Vietnam-era UH-1 Iroquois, better known as the Huey, as the Army’s tactical transport helicopter. Designed to carry 11 combat-loaded troops, the Black Hawk was more survivable than the Huey thanks to its run-dry gearbox, redundant subsystems, armored seats, shock-absorbing landing gear, and ballistically-tolerant fuselage. It was first used during the invasion of Grenada in 1983 and saw action again during the invasion of Panama in 1989. During Desert Storm, the Black Hawk was instrumental in carrying out the largest air assault mission in U.S. Army history with over 300 helicopters involved. During the war, 2 Black Hawks were shot down on February 27, 1991 during a combat search and rescue mission. The Black Hawk has since been upgraded with electronic countermeasures, modern navigation systems, and in the case of the 160th Special Operations Aviation Regiment’s Direct Action Penetrator, M134 7.62mm miniguns and Hydra 70 2.75-inchrockets. Two stealth versions of the Black Hawk also helped to deliver the Navy SEALs that killed Osama bin Laden during Operation Neptune Spear in 2011.

The MIM-104 Patriot is a surface-to-air missile that replaced both the MIM-14 Nike Hercules High to Medium Air Defense missile and the MIM-23 Hawk medium tactical air defense missile. Though it entered service in 1981, the Patriot was unproven in combat when it deployed to the Middle East in 1990. In addition to its anti-aircraft mission the Patriot was also called upon to intercept Iraqi Scud and Al Hussein missiles. Over the course of the war, Patriot missiles attempted to engage over 40 Iraqi missiles. On February 15, 1991, President George H. W. Bush visited Raytheon’s Patriot missile plant and praised its success in the Middle East. “Patriot is 41 for 42: 42 Scuds engaged, 41 intercepted!” The President’s claim of a 97% success rate was challenged by independent investigations into the Patriot’s effectiveness and a government investigation into a failed Scud intercept that resulted in the deaths of 28 American soldiers. The latter was blamed on a one-third of a second deviation in the system’s internal clock due to it being in operation for over 100 hours. Still, the Patriot remains the primary anti-ballistic missile system for America and its allies and is expected to remain in use until at least 2040.