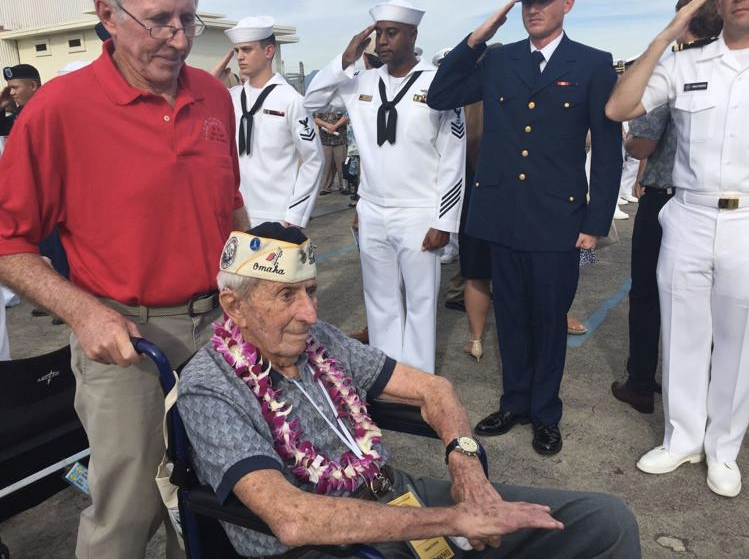 Ed Guthrie at the commemoration of the 75th anniversary of the Pearl Harbor attack in 2016. Photo originally shared by his daughter Peggy Murphy in interview with Omaha World-Herald.

Edward “Ed” Guthrie was Nebraska’s last living survivor and eyewitness of the attack on Pearl Harbor. On January 10, 2021, he passed away at 102 years old.

A Navy Electrician’s Mate 2nd Class, he shared in a previous interview that he was reading a comic book aboard the USS Whitney on the fateful morning of December 7, 1941. Records show that at 0749, explosions were heard. Guthrie shared in a previous interview in 2016 with his local Omaha newspaper that he saw one of the Japanese pilots fly by and he sat in stunned disbelief. The pilot waved at him, so he was under the impression that all was well.

His ship was miraculously not damaged during the attack since they were in repair and away from battleship row. The attack on Pearl Harbor would claim the lives of 2,403 Americans and injure 1,178. In that same interview he shared that he and his shipmates would spend three days pulling bodies out of the water. “All those white sailor suits and that black oil … they didn’t mix very well,” Guthrie said to the Omaha World-Herald. “It’s something you don’t forget.”

Following the attack, he was reassigned to the USS Banner and headed to the Pacific for the duration of the war. He witnessed the atomic bomb testing over the South Pacific. When the war was over he went home to Omaha where he met his wife Janet. They would go on to have three children and he would spend 34 years working for Omaha Power. He was able to attend the 75th memorial event in Hawaii in 2016. Throughout his life he would often give talks and share his memories of World War II and the attack on Pearl Harbor.

In August of 2020, his wife passed away from cancer after 72 years of marriage. His daughter Peggy Murphy shared in an interview with their local paper that he was lost without her. She also shared that he was healthy up until his last 28 hours of life. “He faced so much without complaint,” Murphy said in the interview with Omaha World-Herald. “Whatever happened he accepted. It was his personality; he was easygoing, gentle and kind.”

His daughter is a member of the Nebraska chapter of Sons and Daughters of Pearl Harbor Survivors. She told the paper that “It’s important to keep the word out so that younger people will understand what happened, why it happened and where our country went from there.” She has committed to keep her father’s memories and experiences alive by telling them.

The loss of Guthrie is another reminder that our nation is slowly losing its World War II heroes and their stories. It is up to all of us as American citizens to continue sharing the lessons and memories for them. It is because of their deep courage, sacrifice and devotion to this country that we live with the freedoms we do. Never forget.