46 years later: Reviewing the timeline of the Watergate Scandal - We Are The Mighty

46 years later: Reviewing the timeline of the Watergate Scandal 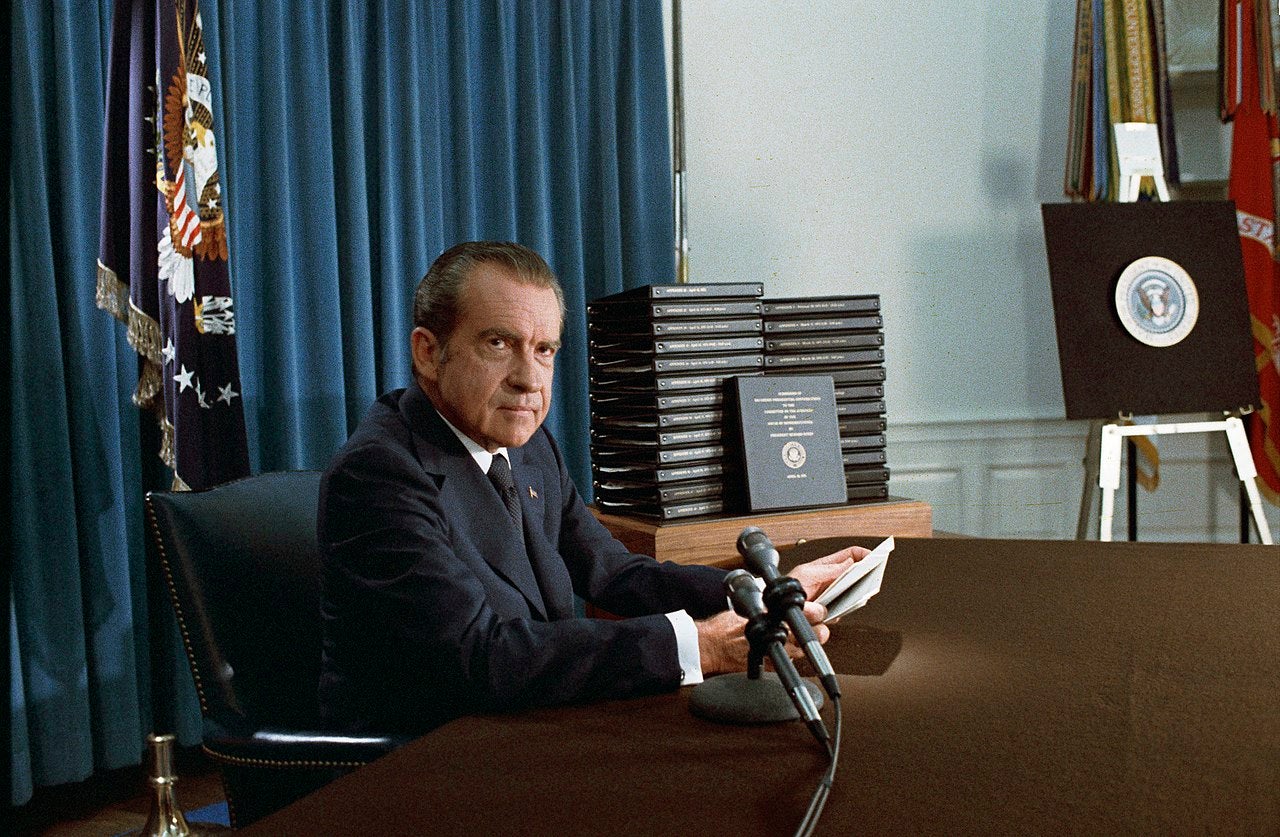 In 1974, the country saw both the Watergate scandal come to an end and Richard Nixon’s presidency come to a close. The scandal that began on June 17, 1972, took two long years to unfold. In the end, the sitting President was impeached and subsequently resigned the office of the presidency, making him the first and only President ever to do so.

It’s been 46 years, but to this day, Watergate remains one of the most infamous political scandals in American history, complete with intrigue, cover-ups, money trails, secret informants and proverbial smoking guns.

For today’s history lesson, here’s a quick refresher and a timeline of events in the Watergate Scandal leading up to the resignation of former President Richard M. Nixon.

Five men — James McCord, Frank Sturgis, Bernard Barker and two accomplices — were arrested while trying to bug the Democratic National Committee’s headquarters at the Watergate hotel. Among their possessions were rolls of film, bugging devices and thousands of dollars in cash.

Bob Woodward, a young Washington Post reporter, was sent to the arraignment of the Watergate burglars, and another young reporter, Carl Bernstein, starts to do some digging of his own.

Bob Woodward had his first contact with “Deep Throat,” his source and informant for the story. Deep Throat’s identity remained hidden for 30 years. In 2005, (at the age of 91) Mark Felt, the Associate Director of the FBI (as the scandal played out), admitted that he was, in fact, Deep Throat.

Alfred Baldwin, a former FBI agent involved with the scandal, agreed to cooperate with authorities in the investigation. Baldwin names E. Howard Hunt and G. Gordon Liddy as two of Nixon’s campaign aides who were involved in the burglary.

The Washington Post reported that a ,000 check (funds intended for Nixon’s 1972 re-election campaign) was deposited in the bank account Bernard Barker — of one of the Watergate burglars.

Nixon continues to deny any involvement in the Watergate Burglary, telling reporters, “I can say categorically that his investigation indicates that no one on the White House staff, no one in this administration, presently employed, was involved in this very bizarre incident.”

In the same news conference, Nixon insists that there is no need for a special Watergate prosecutor.

Deep Throat told Bob Woodward that the money for the burglary was controlled by assistants to Former Attorney General John Mitchell, who incidentally was now serving as the chief of Nixon’s re-election campaign. In words that would become Rule #1 in any good investigation, Felt told Woodward to “follow the money.”

The Washington Post reports that John Mitchell did, in fact, have control over that secret fund, while he was serving as Attorney General. When they reached out to Mitchell for comment, instead of cooperating, an enraged Mitchell threatened the reporters and Katherine Graham (publisher of The Washington Post). Woodward and Bernstein did not back down; instead, they printed Mitchell’s threat in the Post.

Woodward and Bernstein report that the FBI made the connection between Nixon’s aides and the Watergate break-in.

Richard Nixon is elected to a second term in office; winning by a landslide against George McGovern.

G. Gordon Liddy and James McCord were convicted for their roles in the Watergate break-in.

James McCord wrote a letter to Judge Sirica, who presided over the Watergate trial. The letter points to a conspiracy and a cover-up in the White House. The letter is read in open court.

President Richard Nixon accepted responsibility for the scandal but maintained that he had no prior knowledge of it.

Senate Watergate Committee begins public hearings that were nationally televised. During these hearing, Senator Howard Baker, R-Tenn., (Vice-Chairman of the committee) famously asked, “What did the President know, and when did he know it?”

Archibald Cox was appointed as a special prosecutor to lead the investigation into both Nixon’s re-election campaign and Watergate.

President Nixon was known to have recorded his calls in the Oval Office. It was believed he was in possession of dozens of tapes that proved his involvement in the cover-up; those tapes became known as the “Nixon Tapes.” The Senate Watergate Committee issues subpoenas for The Nixon Tapes after the President refused to turn them over.

Folding under intense pressure, President Nixon finally releases the transcript of his conversations with then chief-of-staff, H. R. Haldeman. These transcripts proved that the President ordered a cover-up of the burglary at the Watergate Hotel on June 23. 1972, six days after the burglary.

In a nationally televised speech, the 37th President of the United States formally resigned, making him the first and only President ever to do so.

Richard Nixon signed his letter of resignation, and Gerald Ford was sworn in as the 38th President of the United States.