Global Coffee Company CEO goes all in for Team USO 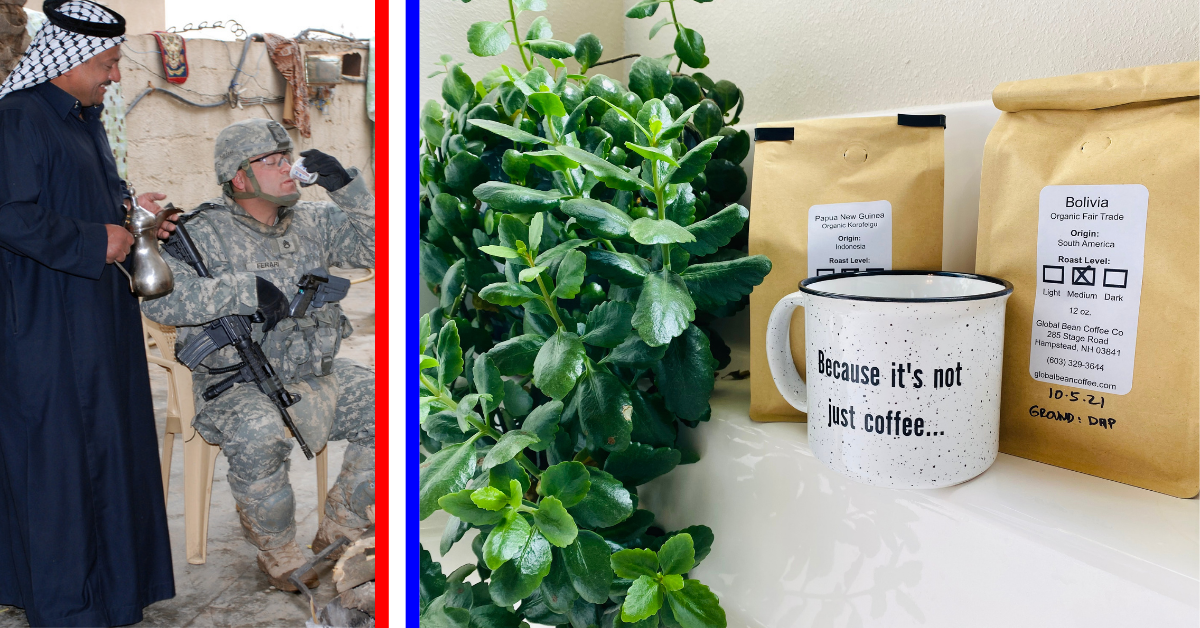 “I started this as a stay-at-home dad,” he explained. “After about three months I was thinking, now what can I do? I saw that coffee was missing.” From there, Lancey started his coffee business by selling espresso machines. Before long, customers were asking for him to provide coffee for them, too.

There wasn’t much he wouldn’t do and often had his son along for the ride. “I had great service, I pride myself on that. I tried to be a good dad and a workaholic,” Lacey explained.

He began sourcing coffee through a company out of New York but wasn’t impressed with their selection. “There just wasn’t a lot of variety and they were raising prices quite regularly. I’m the guy who does my own thing when you push me so I bought my own roaster,” Lacey shared. “I decided to go with air roasting because it delivers a better product though it’s more expensive because you can only do it in smaller batches.”

The price for his premium and mostly organic freshly roasted coffee has remained the same since the company’s inception. It was important to ensure everyone had the opportunity to afford quality coffee while staying true to the mission of quality. Lacey roasts and bags his coffee in smaller batches to ensure it is always fresh.

“I use a carafe bag with a white label; it’s generic. I tell people you are paying for the coffee, not the bag but if you want a fancy label or bag I can do it and up the price a little bit,” Lacey laughed.

He opened a storefront shop in New Hampshire in 2011. On any given day you’ll find hipster millennials strolling around or military veterans like his buddy, “Sarge”, picking up their favorites.

Coffee has always been a grounding force for him and knows for others, it’s the same. “It’s more than just a cup of coffee. It’s moments and memories,” he added. The connection and meaning is definitely something widely appreciated by the United States Armed Forces, especially on deployments.

Lacey’s girlfriend was looking for a special gift to give to her brother, a retired Navy Commander. He suggested sending him a basket of his finest coffee, of course. “We got a call a while later and it was him…he said ‘Mike it’s the best coffee I’ve ever had’,” he shared

Although he himself didn’t serve, it is a part of his family legacy.

“My step-father drove tanks in World War II and my father was a Marine in the Korean War,” Lacey said. Growing up, his dad would often share horror stories from Marine Corps boot camp training. It was part of the reason he probably never explored enlisting himself, he laughed.

Passionate about the military community –– supporting Team USO for the upcoming Boston Marathon was a no brainer, Lacey said.  “I truly believe in the mission of the USO, the cause and would love to help in any way I can,” he added.

He was one of the first donors to give $1,000 in support of the team, which boasts three veterans (We Are The Mighty CEO and Air Force veteran Mark Harper, Army veteran Ryan Curtis)  and two active duty runners (Army Col. Matthew Mapes and a Green Beret with 7th Special Forces Group, Zethadia Millman.

“It’s such a special thing, especially for the New England area. I am proud to be a small part of it all,” Lacey said.

On Monday Oct 11, 2021, the iconic Boston Marathon –– a year and a half in the making –– will finally occur. You can support Team USO and the We Are The Mighty fundraiser by clicking here.