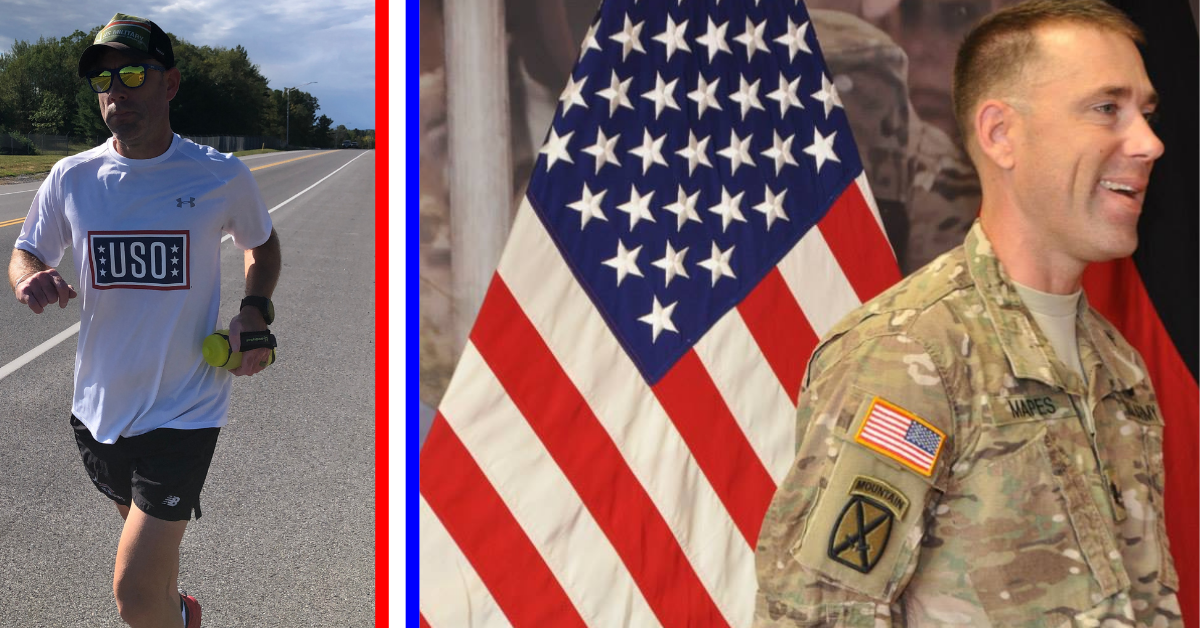 Army Col. Matthew Mapes has spent 22 years serving America. Running the Boston Marathon in support of the USO is his way of giving back to an organization that’s done so much for him and his fellow soldiers.

Coming from a long line of family members who served, it was always in the back of his mind to be a part of a legacy of service. “Both of my grandfathers served in the Navy during World War II. Ever since I was a young kid I had a desire to serve and when I got to Northern Illinois University I didn’t go there knowing I’d join ROTC but it’s what happened,” he added. “I’d always been part of teams growing up and I missed that aspect, belonging to a team. Especially a team with a purpose such as the United States Army.”

Watching the cadets drilling would spark him into action. “The second semester I joined ROTC and really enjoyed it. I did my four years of college and was commissioned into the Army. Over 22 years later, I’m still enjoying it,” Mapes said.

On July 16, 2021, Mapes took command of Fort Drum Medical as its commander. Mapes holds a Master’s degree in Adult, Occupational and Continuing Education from Kansas State University as well as a Master’s degree in National Security and Strategic Studies that he earned from the U.S. Naval War College. Before taking command at Fort Drum, he was the Deputy Commander for Administration and Medical Services of Fort Hood.

Mapes believes his time as a soldier has completely changed who he is. “Through 22 years of service, being deployed to Afghanistan on numerous occasions and traveling the entire world…you see different parts of the world and how fortunate we are here in the United States,” he explained. “The quality of life and rights we enjoy. It’s given me a different perspective on things. Some individuals may take it for granted.”

It’s also one of the reasons he’s so excited to run the Boston Marathon in honor of those who serve and on Team USO. “From Afghanistan all the way to the recent COVID operations, the USO has been a huge support,” he said. “Wherever the military goes the USO is right there supporting us. This is just one way I can give back.”

Incredibly passionate about health and fitness, he said running was always something special for him. “I’ve been a runner pretty much my entire life. Ran as a young kid, in high school and through college. Running has been a part of my livelihood,” he explained. “I had a friend who several years ago had run the Boston Marathon as part of Team USO. When USO was looking for an additional runner they reached out to me through him.”

He won’t be a Boston Marathon rookie either, since he had the chance to run it back in 2009. Joining in on the campaign for Team USO was an easy yes, he said. “The USO has supported me my entire career and not just me but also my family and my comrades,” he added.

The Boston Marathon was scheduled for Patriot Day in 2020 but had to be canceled due to the widespread COVID-19 pandemic. When they called to see if he was still interested a year and a half later, Mapes said he was all in.

For Mapes, it’s the community and energy of the iconic race which has him the most excited.

“Everybody talks about how Boston is historic. The whole city comes out to support the run but I didn’t appreciate it until I experienced it in person. It is just incredible,” he said. “The whole community is involved and running along the course, the fans outside cheering all the runners on and after the run watching the runners walking around downtown wearing their medals. That’s what I am looking forward to the most. Just the spirit of the marathon.”

To learn more about Team USO and to donate, visit: givengain.com/ap/tessa-robinson-raising-funds-for-united-service-organizations-inc-uso-/