The Navy initially denied Grace Hopper’s enlistment. Then she revolutionized computers. - We Are The Mighty 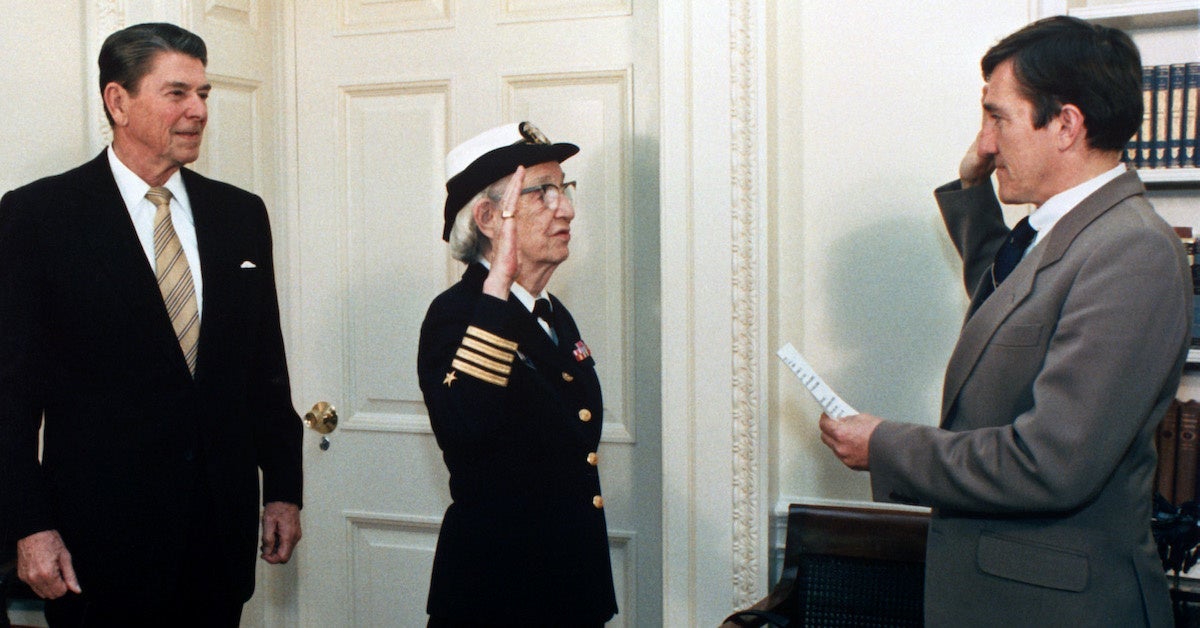 Secretary of the Navy, John Lehman, right, promotes Capt. Grace Hopper to the rank of commodore in a ceremony at the White House. President Ronald Reagan is at the left. (Wikimedia Commons).

Grace Hopper, WAVE mathematician, assigned to Harvard University to work on the computation project with a Mark I computer, was instrumental in ushering in the computer age. Hopper went on to become a Rear Admiral, held a Ph.D. from Yale, and tried to enlist during WWII but was rejected because of her age. As a computer scientist, Hopper made significant strides in coding languages. Here’s a profile of her life and how she directly impacted yours.

The fact that you’re able to read any of these words on your device is thanks, in part, to Grace Hopper, one of the most formidable American computer scientists. Serving as a Navy Rear Admiral, Hopper was one of the first programmers of the Harvard Mark I computer. Her impact on our modern lives is significant and nothing to be trifled with; let’s take a look at how Hopper directly impacted everything we do today.

In 1934, Hopper earned a Ph.D. in math from Yale. Her dissertation was published the same year. By 1941, she was an associate professor at Vassar.

Hopper’s great grandfather was an admiral in the U.S. Navy and fought in the Battle of Mobile Bay during the Civil War. At the onset of WWII, Hopper tried to enlist in the Navy but was turned away because of her age. At 34, she was too old, and her height to weight ratio was too low for Navy standards. Hopper’s enlistment was also denied based on the criteria that her job as a mathematician was valuable to the war effort.

Undeterred, Hopper took a leave of absence from Vassar in 1943 and then joined the United States Navy Reserve. She was one of several women who volunteered to serve in WAVES (Women Accepted for Volunteer Service), as part of the US Naval Reserve.

What were her contributions?

Hopper had to receive an exemption to enlist because she was fifteen points underweight. After training at the Naval Reserve Midshipmen’s School at Smooth College, Hopper graduated first in her class in 1944. She was assigned to the Bureau of Ships Computation Project at Harvard. There, she and Howard Aiken co-authored three papers on the Automatic Sequence Controlled Calculator, also known as Mark I.

Mark I was used during the war effort during the latter part of WWII. It helped compute and print mathematical tables and directly contributed to the Manhattan Project. Specific sets of problems were run through the Mark I to help create simulation programs to study the atomic bomb’s implosion.

Despite her contributions, Hopper was denied a transfer to the Navy at the end of the war because of her “advanced” age of 38.

Hopper moved on to the private sector and set at work recommending the development of a new programming language that would entirely use English words. She was told that this was impossible since computers didn’t understand English and it took three years for the idea to be accepted. That was the beginning of COBOL – Common Business Oriented Language, a computer language for data processors. During this time, Hopper served as the director of the Navy Programming Languages Group and was promoted to the rank of captain in 1973.

What was her impact?

Hopper retired from the Naval Reserve as a commander in 1966 at the age of 60. She was then recalled to active duty in August 1967 for what started as a six-month assignment but turned into an indefinite appointment. Then in 1971, she retired again … only to be called back once more to active duty. Admiral Elmo Zumwalt presided over her promotion in 1973.

A joint resolution originating in the House of Representatives led to her promotion in 1983 to commodore by special appointment from President Reagan. Hopper remained on active duty for several years after the mandatory retirement age. IN 1985, the rank of commodore was renamed rear admiral, and Hopper became one of the Navy’s few female admirals.

Admiral Hopper’s career spanned more than four decades, and she retired in 1986. She was awarded the Defense Distinguished Service Medal, the highest non-combat decoration awarded by the DoD.