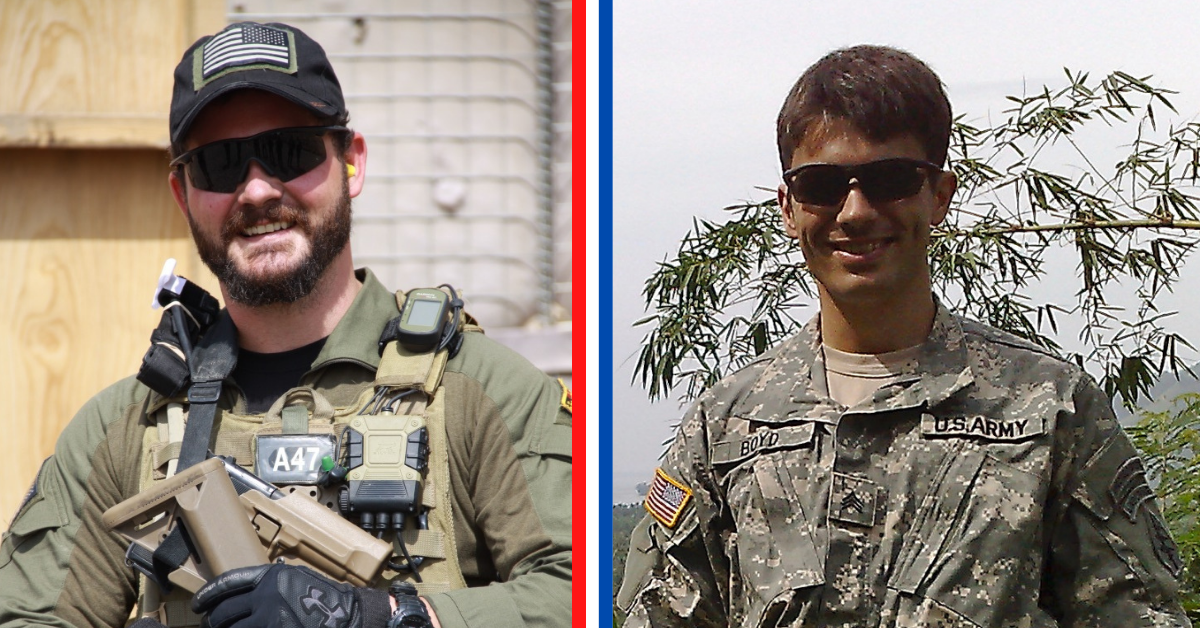 Photo courtesy of Wilson and Boyd.

Adyton is a veteran-owned and venture backed American Public Benefit Corporation which builds mobile software. Founded by two Green Berets with a passion for technology, their story of creating innovative products for those who serve is pretty extraordinary.

So, how does Tennessee native JJ Wilson –– who grew up in a single wide trailer located in the backwoods –– become best friends with James Boyd, a self-described “pudgy kid from England?” By becoming a quiet professional, of course.

Though born in the United States, Boyd spent his early years growing up in England –– surrounded by the visible remnants and deep history of both world wars. Both parents were British and very service-oriented. His father felt called to raise his own right hand after World War II.

So, why go to America? “I saw the exciting things happening in technology in Silicon Valley and I also felt the desire to go and see the world and go and do things without bounds, without limits. I love this ethos about the United States,” Boyd explained.

But, he’s not completely Americanized. “I believe football should be played with your feet and beer should be enjoyed at room temperature,” he said with a smile.

When America was attacked by terrorists, Boyd felt the same pull his father had to serve. “I’ve always been an engineer, total nerd and went to Stanford to study computer science in 2001. Then 9/11 happened my very first week of college,” he said.

During his senior year at Stanford University, he enlisted in the Army and volunteered for Special Forces training.

Boyd arrived at Fort Benning, Georgia for boot camp in 2005 and as an avid reader –– had many of his favorite books in tow. “It’s like dark night with orange fluorescent lights and this skinhead shaved head-like redneck dude comes up to me and says I heard you went to Stanford,” Boyd shared.

The “redneck dude” was Wilson. “He thought it was going to come to fisticuffs. This is sort of a forward leading alpha environment you know and I was really just looking to make a buddy,” he laughed.

Wilson was the first in his family to go to college and most likely the first in his town to make it to an Ivy League school. “To get out of town where I grew up you either joined the military or went to prison. I was fortunate enough to go to Cornell,” he said. Despite the undeniable educational opportunity of a lifetime, watching 9/11 made him question staying. But he did graduate before enlisting and finding himself standing in front of Boyd.

The other recruits had told Wilson there was another “college guy” who’d brought a lot of books, which led to their meeting. “We just instantly became best friends,” he said.

Boyd was an Honor Graduate of the U.S. Army Infantry School, the Special Forces Noncommissioned Officer Leadership Academy and the Special forces Qualification Course. As a brand-new Green Beret, he was assigned to 1st Special Forces Group (Airborne) as a Communications Sergeant.

Much of his work was spent chasing financers and disrupting the supply chains for Al Qaeda. It was here Boyd started questioning why the Army systems and technology was still so rudimentary. “I’m deployed and training my partner forces, running missions while also writing code because I’ve got these different analyst’s notebooks and Google Earth spreadsheets. I was trying to bring all of this data together,” he explained.

Wilson was assigned to 1st Special Forces Command with 1st Battalion 10th Group out of Germany after earning his Green Beret. He deployed to Afghanistan twice, earning the Bronze Star as well as other awards and decorations. In 2013, he left the Army to pursue his MBA at Yale and then joined Boston Consulting Group working on enterprise technology strategy.

In 2011, Boyd was recruited from the Army to join the defense group Palantir. “I spent seven years working through all different theaters of Special Operations commands and a lot of time in Iraq, Afghanistan and Africa,” he shared. “One of the pervasive things I saw is everywhere you went, if  you’re doing intelligence stuff you had overhead sensors and planes and drones and tons of structured data. But if you’re doing field things or you’re doing operational things everything is still pen and paper.”

After hearing his own younger brother’s harrowing recounting of an almost catastrophic operation with an Army-issued mobile device during enemy contact while deployed, Boyd was spurred into action. His first call was to Wilson.

The idea was to create a start-up to develop mobile technology for the Department of Defense. “I was like, man, this will never work and you’re going to have to convince my wife. But when do we start? Let’s go do this thing,” Wilson laughed.

It started when a Navy SEAL commander asked Boyd if he knew of a mobile technology which would allow him to track things like push-ups, obstacle course timing and track ACL injuries on the beach. It was 2018 and all of the instructors were still keeping records by hand. Only a year later, Adyton was established.

“We started working with the SEALs for their needs, with the Navy on things dealing with combat casualty care and the Air Force on flight scheduling. It led to our very first DOD contract,” WIlson said.

On October 6, 2021 Adyton launched its flagship product, Mustr. It was born out of the chaos of 2020 during the COVID-19 pandemic as a way to create secure accountability and a digital home for the defense community.

“It’s like we’re building a G-Suite for combat. It’s a product which creates data driving visibility and accountability for leadership and gives them an ability to understand their own personnel and their workforce in their operations,” Wilson said. “From the enterprise perspective, it’s a product designed from day one for compliance and security and to be able to operate in the kinds of environments where service members actually go and do their work.”

And Mustr is just the beginning. “My dream would be basically to take all the good guys and put them all on the same operational software suite. You allow them to generate data, do things more effectively and really just collaborate more effectively because I think makes the world a safer place,” Wilson said.

Boyd echoed his hopes with some reflections of his own, namely his dream to get rid of whiteboards and paper as a staple for operations –– for good. “The United States has the most well-equipped, highest training, most professional military in the world period. But we do tons and tons of stuff the hard way, right? Because we’re tough and we can do it,’ he explained. “This actually slows down our ability to become even better.”

Both also agree their time in uniform changed their lives and perspectives on living, for good.

“We talked earlier about the limits of what’s possible in the United States. And what it teaches you how you’re actually only bound by the limitations you perceive for yourself,” Boyd explained. “I think in the military you see these acts of heroism, these acts of bravery or you see just everyday toughness. These are people who are just looking to make progress, trying to make things better. You see how these are the type of people you always want to be around.”