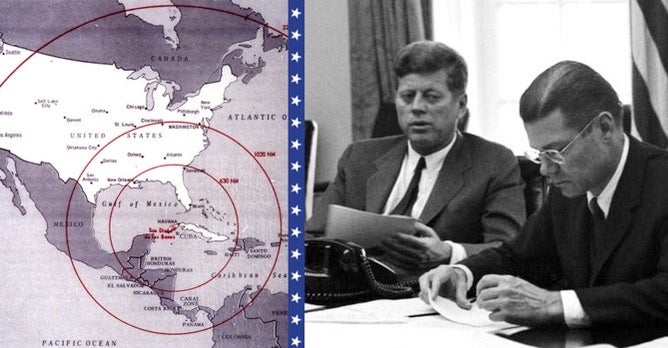 For 13 days in 1962, the world stood on the brink of nuclear destruction. How close humanity came to a nuclear holocaust has been well-documented in the past, but a new book from Serhii Plokhy, a professor of Ukrainian history at Harvard University, details a lot things the CIA missed about the Russian nuclear force on Cuba at the time.

In “Nuclear Folly: A History of the Cuban Missile Crisis,” Plokhy uses newly declassified documents from Russia and Ukraine (a member of the Soviet Union at the time), to show the world a list of things previously unknown about the crisis.

After U-2 spy planes uncovered the presence of nuclear-armed missile sites on the island of Cuba on Oct. 22 1962, the United States and the Soviet Union entered a nearly two-week standoff. As diplomats and leaders wrangled to cut a deal that would end the crisis, the U.S. military went on high alert, reaching DEFCON 2 in some areas.

When the CIA finally got wind of the nuclear missiles on Cuba, they were in place and ready to launch, capable of hitting targets deep inside the continental United States. They were also able to strike Washington – and the U.S. intelligence community had no idea.

It was only through dumb luck they noticed at all. An analyst looking at the flyover photos saw soccer fields constructed on the island. Cubans didn’t play soccer, by and large, because they preferred baseball as a sporting pastime. Russians, however, loved soccer. And upon taking a closer look, they discovered the Soviet missile sites.

What the intel agencies missed, according to the new book, was the presence of Luna short-range nuclear missiles on the island. Moreover, there weren’t just 4,000 troops from the USSR in Cuba, there were 40,000 – a much larger number than previously known.

If the U.S. invaded Cuba, the Soviets and the Cubans were prepared to retaliate with everything available in the arsenal on the island and elsewhere. It was a strategy favored by many in the administration of President John F. Kennedy. Had Kennedy authorized the invasion, it’s estimated that 70 million Americans would have died during the exchange.

The Soviet troops stationed on the island were living in fear of the same exchange, the new book reveals. They believed an invasion and nuclear war was imminent, especially after another U-2 spy plane was shot down over Cuba on Oct. 27, 1962.

There were numerous close calls during the crisis, but in every instance cooler heads prevailed. A Russian submarine nearly launched a nuclear torpedo at the blockading squadron. Two F-102 fighters armed with nuclear-tipped missiles avoided two Soviet MiG-17s in the search for the downed U-2, and another nuclear submarine nearly launched a nuclear torpedo when Americans fired off a flare into the night sky.

Kennedy himself wavered between pinpoint airstrikes and a carpet bombing campaign to neutralize the threat. In the end, at the behest of the former U.S. Ambassador to Moscow Tommy Thompson, Kennedy opted to “quarantine” the island, instituting an effective blockade (without calling it a blockade, which would have been an act of war).

While cutting off Cuba from receiving more men and material, he talked to Soviet leader Nikita Kruschev and brokered a deal that would remove the Soviet troops in exchange for a promise from the U.S. not to invade Cuba. It was later revealed that Kennedy removed nuclear weapons from Turkey in the deal.

At the end of the 13 Days, everyone left the deal with something they wanted. Kennedy and Khruschev both removed existential threats to their countries and nuclear war was averted. For Kennedy, the deal boosted his popularity at home. For Khurschev, it was a political disaster. The removal of missiles from Turkey remained a secret, so to the public and the Soviet Communist Party, it looked like Khrushchev balked. He was out of power two years later.