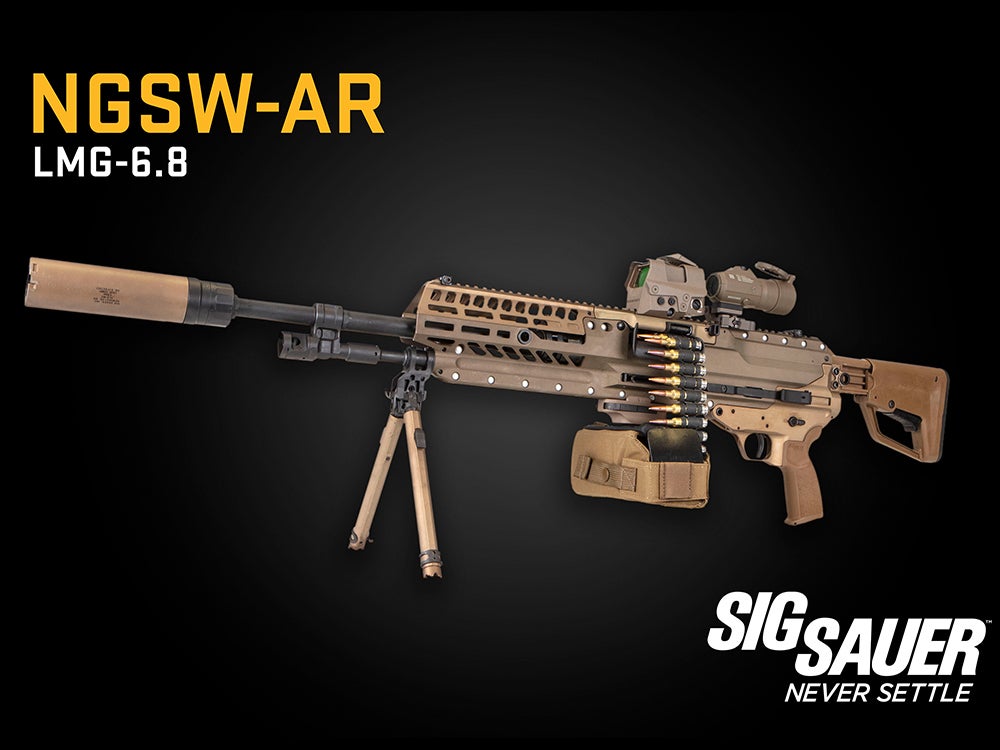 At first glance, the new machine gun looks very similar to most machine guns currently in military use. To be fair, that was part of the design philosophy when SIG Sauer planned the LMG-6.8. Their intent is to maintain the familiarity of infantry weapon systems while increasing the soldier’s lethality with their new machine gun.

Perhaps the most important improvement featured in the LMG-6.8 is the bullet that it fires. The Army only stipulated the bullet’s diameter for the NGSW program. How the manufacturers cased the round was up to them. While Textron opted for a futuristic plastic telescope-cased design, SIG made improvements where they could while retaining proven reliability.

SIG’s 6.8x51mm hybrid ammunition uses a traditional brass case that features a stainless steel base. This increases the strength of the case’s primer pocket and allows for a higher pressure loading. Simultaneously, it maintains the tried and tested reliability of brass-cased ammo in sealing the weapon’s chamber. The new round not only exceeds the performance of the M249’s 5.56x45mm NATO round, but also the M240’s 7.62x51mm NATO round.

Following the modern design methodology of modularity, the LMG-6.8 can also be chambered in 7.62x51mm NATO and 6.5 Creedmoor. The former is an especially useful feature for the Army if the SIG Sauer entry is selected. As units acquire the new machine gun, they will also have to acquire the new 6.8x51mm ammo. Designing the NGSW-AR to be configured to fire 7.62x51mm NATO allows soldiers to train with and expend existing stockpiles of ammo while stockpiles of new ammo are built up. It also allows continued interoperability with NATO partners who don’t make the switch to the new round.

Looking to the future, another requirement for the NGSW program is a powered rail. Utilizing a battery box integrated into the top of the stock, the LMG-6.8 powers its 22-inch top rail for the use of enablers like scopes, cameras, and other electronic equipment that the Army may integrate in the future. The machine gun also features an adjustable stock and a familiar M4/M16-style fire selector switch. It’s worth noting that the semi-automatic and automatic positions are switched from the traditional M4/M16 pattern.

Slightly unique for a belt-fed machine gun is the LMG-6.8’s charging handle. To start, it’s a left-side charge. Even more unusual is its folding design. This keeps it out of the way and allows the weapon system to be more streamlined and reduce the chance of snagging. The feed tray is also a side-opening design. Not only does this make it easier to manipulate, but it also allows the end user to mount additional attachments like clip-on thermals with minimal interference.

Another quality of life improvement is the loading process. The LMG-6.8 can be loaded on safe or fire, feed tray open or closed, with or without the loading spoon, and with the bolt forward or back. It also features a mountable magwell for the attachment of its box magazine. This makes reloading on the move a more familiar and much easier task. It also allows the system to be adapted to new mounting methods that might be developed in the future.

A bipod is a necessity for a machine gun and the LMG-6.8 has quite a nice one. Integrated into the front end of the weapon, the bipod can be deployed with just one hand. Moreover, it can be folded and stowed either to the front or back of the weapon depending on the user’s needs.

Another part of the LMG-6.8 system is the suppressor. Where other firearms generally need an increase in gas pressure to cycle properly with a suppressor, SIG’s design can run just fine with or without a suppressor on its normal gas setting. It does have an adverse gas setting in the event that it is used in a truly trying environment like extreme cold, sandy deserts, or swampy jungles. The suppressor itself also minimizes the amount of gas blowback to the shooter and reduces their exposure to toxins.

SIG Sauer has stated that the NGSW submissions are still working prototypes. “We’re continually evolving them for the program,” said Jason St. John, Director of Government Products at SIG Sauer. Whichever manufacturer the Army selects, the desired end-state is a more adaptable, accurate, and lethal soldier for tomorrow’s fight.