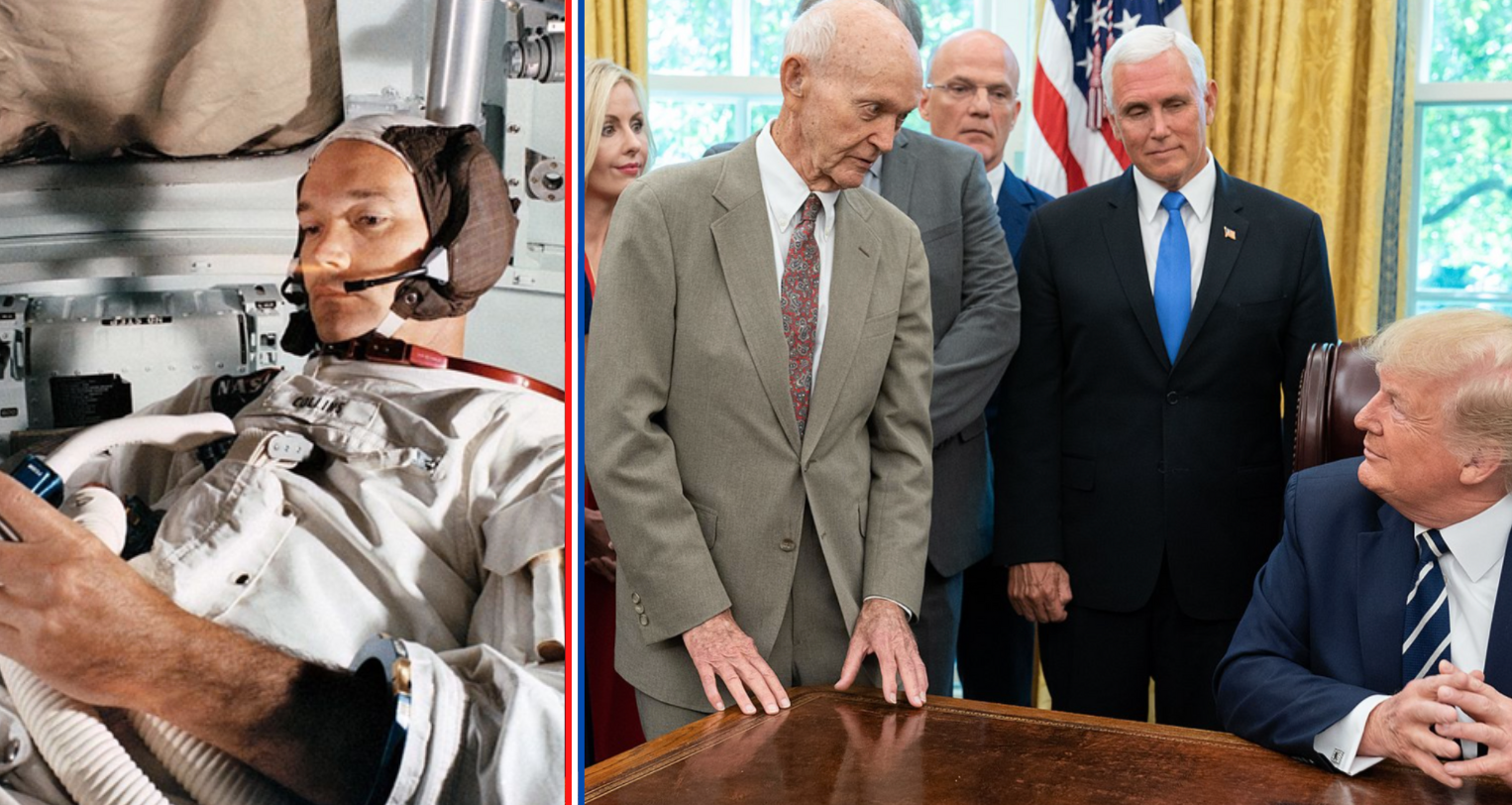 American hero Michael Collins passed away on April 28, 2021 at the age of 90 after a battle with cancer. Along with Neil Armstrong and Buzz Aldrin, Collins was one of the Apollo 11 astronauts who made the legendary trip to the moon in 1969. He also served as an Air Force test pilot and reached the rank of Major General in the Air Force Reserves.

Collins was born on October 31, 1930 in Rome, Italy. He was the son of a U.S. Army officer serving as the U.S. military attaché. As a military child, Collins spent his youth in a number of locations including New York, Texas and Puerto Rico. It was in Puerto Rico that Collins first flew a plane. During a flight aboard a Grumman Widgeon, the pilot allowed Collins to take the controls. Though this ignited Collins’ passion for flight, the start of WWII prevented him from pursuing it.

When the U.S. entered WWII, Collins’ family moved to Washington, D.C. where he attended St. Albans School and graduated in 1948. He decided to follow his father and older brother into the service and received an appointment to the United States Military Academy at West Point. His father and brother were also West Point graduates. Collins graduated in 1952. In his graduating class was fellow future astronaut Ed White who tragically perished in the Apollo 1 disaster.

Collins’ family was famous in the Army. His older brother was already a Colonel, his father had reached the rank of Major General, and his uncle was the Chief of Staff of the Army. To avoid accusations of nepotism, he opted to commission into the newly formed Air Force instead.

Collins received flight training in Mississippi and Texas and learned to fly jets. He was a natural pilot with little fear of failure. After earning his wings in 1953, he was selected for day-fighter training at Nellis Air Force Base, Nevada where he learned to fly the F-86 Sabre. Although 11 pilots were killed in accidents during the 22-week course, Collins was unfazed.

After training, Collins was stationed at George Air Force Base, California until 1954. He moved to Chambley-Bussières Air Base in France where he won first place in a 1956 gunnery competition. He met his future wife, Patricia Mary Finnegan, in an officer’s club. A trained social worker, Finnegan joined the Air Force service club to see more of the world. Their wedding was delayed by Collins’ redeployment to West Germany during the 1956 Hungarian Revolution. However, they were married the next year in 1957. Their first daughter, future All My Children actress Kate Collins, was born in 1959. The Collins’ had a second daughter, Ann, in 1961 and a son, Michael, in 1963.

In 1957, Collins returned to the states to attend the aircraft maintenance officer course at Chanute Air Force Base, Illinois. In his autobiography, Collins described the course as “dismal” and boring. He preferred to fly planes rather than maintain them. Afterward, he commanded a Mobile Training Detachment and a Field Training Detachment training mechanics on servicing new aircraft and teaching students to fly them.

Eager to get back into the cockpit, Collins applied to the Air Force Experimental Flight Test Pilot School. He was accepted to Class 60C in 1960. His classmates included fellow future Apollo astronauts Frank Borman, Jim Irwinn and Tom Stafford. The test pilot school put Collins at the controls of the T-28 Trojan, F-86 Sabre, B-57 Canberra, T-33 Shooting Star and F-104 Starfighter. Notably, Collins quit smoking in 1962 after a suffering bad hangover. The next day, he flew four hours as the co-pilot of a B-52 Stratofortess. Going through the initial stages of nicotine withdrawal, Collins described the flight as the worst four hours of his life.

Following the historic Mercury Atlas 6 flight of John Glenn in 1962, Collins was inspired to become an astronaut. However, NASA rejected his first application. Undeterred, Collins flew for the Air Force Aerospace Research Pilot School. He later applied and was accepted to the Air Force’s postgraduate course on the basics of spaceflight. He was joined by future astronauts Charles Bassett, Edward Givens, and Joe Engle.

In June 1963, Collins applied to the astronaut program again and was accepted. After basic training, Collins received his first choice in specialization: pressure suits and extravehicular activities. In June 1965, he was received his first crew assignment as the backup pilot on Gemini 7. Following the system of NASA crew rotation, this slated Collins as the primary pilot for Gemini 10.

Along with John Young, Collins lifted off from Cape Canaveral at 0520 on July 18, 1966. Gemini 10 took them to a new altitude record of 475 miles above the Earth. Collins later said that he felt like a Roman god riding the skies in his chariot. On Gemini 10, Collins also became the first person to perform two spacewalks on the same mission. At 0406 on July 21, Young and Collins splashed into the Atlantic and were safely recovered by the USS Guadalcanal.

After Gemini 10, Collins was reassigned to the Apollo program. He was slated as the backup pilot on Apollo 2 along with Frank Borman and Tom Stafford. However, Collins’ future in Apollo was put on hold when he began experiencing leg problems in 1968. He was diagnosed with cervical disc herniation and had to have two vertebrae surgically fused. Originally slotted as the primary pilot for Apollo 9, Collins was replaced by Jim Lovell while he recovered.

Following the success of Apollo 8, Armstrong, Aldrin, and Collins were announced as the crew of Apollo 11. While training for the mission, Collins compiled a book of different scenarios and schemes during the lunar module rendezvous. The book ended up being 117 pages.

Collins also created the mission patch for Apollo 11. Backup commander Jim Lovell mentioned the idea of eagles which inspired Collins. He found a painting in a National Geographic book, traced it, and added the lunar surface and the Earth. The idea of the olive branch was pitched by a computer expert at the simulators.

At 0932 on July 16, 1969, Apollo 11 lifted off. Collins docked the Command Module Columbia with the Lunar Module Eagle without issue and the combined spacecraft continued on to the Moon. Apollo 11 orbited the Moon thirty times before Aldrin and Armstrong entered the Eagle and prepared for their descent to the lunar surface. At 1744 UTC, Eagle separated from Columbia, leaving Collins alone in the command module.

While Aldrin and Armstrong performed their mission on the Moon, Collins orbited solo. During each orbit, he was out of radio contact with the Earth for 48 minutes. During that time, he became the most solitary human being alive. Despite that, Collins did not feel scared or alone. He later recalled that he felt, “awareness, anticipation, satisfaction, confidence, almost exultation.”

Collins orbited the Moon a further 30 times in the command module. After spending so much time in the spacecraft, he decided to leave his mark in the lower equipment bay. There, he wrote, “Spacecraft 107 – alias Apollo 11 – alias Columbia. The best ship to come down the line. God Bless Her. Michael Collins, CMP.”

At 1754 UTC on July 21, Eagle lifted off from the Moon and rejoined Columbia for the trip back to Earth. Columbia splashed into the Pacific at 1650 UTC on July 24. The crew was safely recovered by USS Hornet. As the first humans to go to the Moon, Collins, Aldrin, and Armstrong became worldwide celebrities. They embarked on a 38-day world tour of 22 foreign countries.

Satisfied with his legendary space flight, Collins retired from NASA after Apollo 11. He was urged by President Nixon to serve as the Assistant Secretary of State for Public Affairs. However, the Vietnam War, the invasion of Cambodia, and the Kent State shootings, sent waves of protests and unrest across the country. Collins did not enjoy the job and requested to become the Director of the National Air and Space Museum. Nixon approved and Collins changed jobs in 1971.

Along with Senator and former Air Force Major General Barry Goldwater, Collins lobbied Congress to fund the building of the National Air and Space Museum. In 1972, Congress approved a budget of $40 million. With a smaller budget than what Collins had hoped for, he also had a short suspense to meet. The museum was scheduled to open on July 4, 1976 for the country’s bicentennial. Not one to back away from a challenge, Collins got to work hiring staff, overseeing the creation of exhibits, and monitoring construction. Not only was the museum completed under budget, but it opened three days ahead of schedule on July 1, 1976.

Still a member of the Air Force Reserve, Collins reached the rank of Major General in 1976 and retired in 1982. He served as the museum’s director until 1978 when he became undersecretary of the Smithsonian Institution. In 1985, he started his own consulting firm. He has also wrote books on spaceflight, including a children’s book on his experiences. Collins enjoyed painting watercolors of the Florida Evergreens or aircraft that he flew. He lived with his wife in Marco Island, Florida and Avon, North Carolina until her death in April 2014.

Following Collins’ passing, NASA released a statement. “NASA mourns the loss of this accomplished pilot and astronaut, a friend of all who seek to push the envelope of human potential,” the release said. “Whether his work was behind the scenes or on full view, his legacy will always be as one of the leaders who took America’s first steps into the cosmos. And his spirit will go with us as we venture toward farther horizons.” Michael Collins will forever be remembered as an American hero and a champion for humanity on its quest into space.