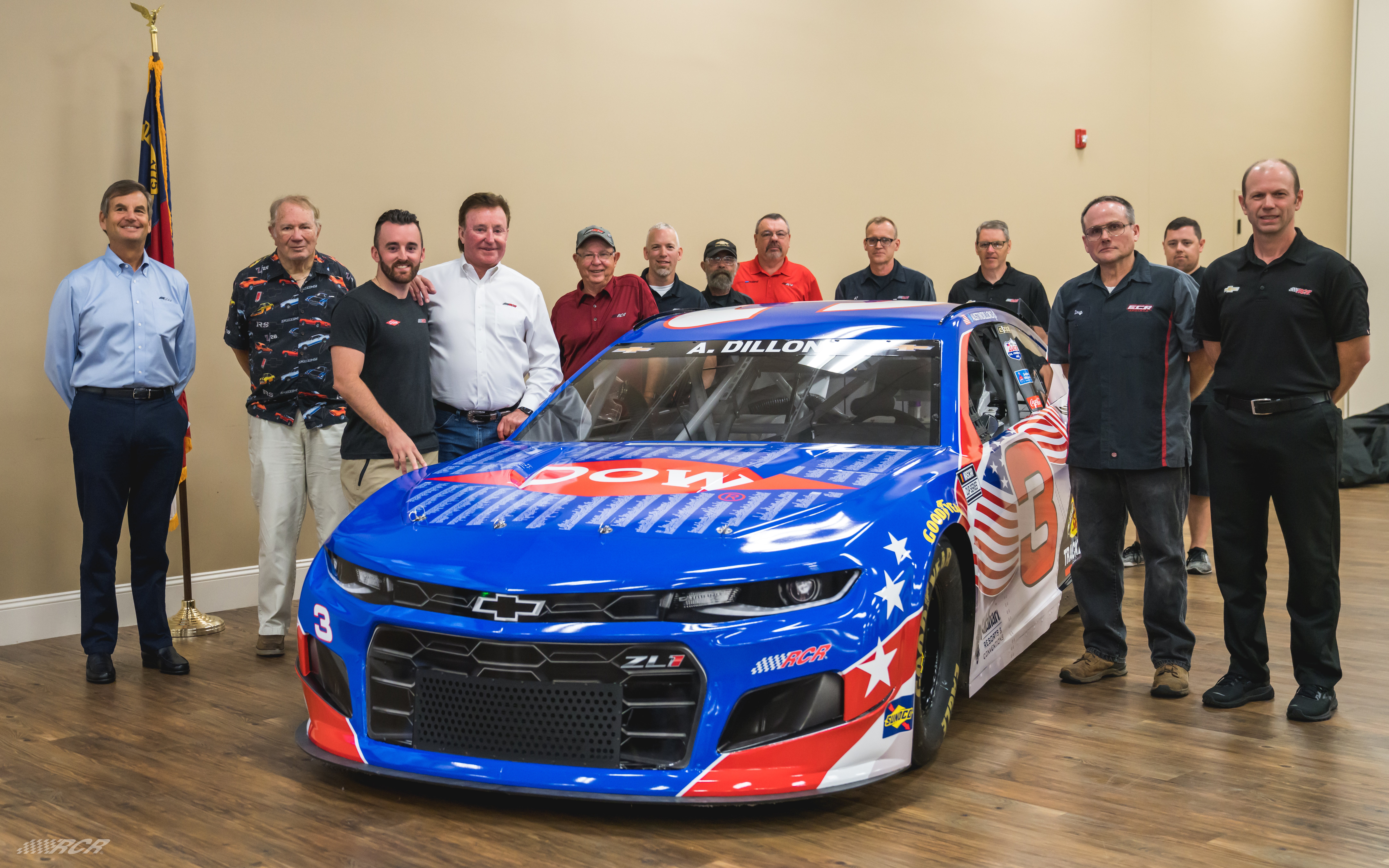 This Independence Day weekend, Austin Dillon will race in the inaugural NASCAR Cup Series race at the Road America. Riding along with him will be over 1900 veterans and active duty military service members.

For the seventh year in a row, Dow has renewed its commitment with Richard Childress Racing to honor veterans. It has grown from featuring 250 names to 1903. On June 29, 2021 the company unveiled the Dow Salutes Veterans Chevrolet, which features a patriotic red, white and blue paint scheme and vibrant American flags.

Richard Childress Racing President and U.S. Navy Veteran Torrey Galida spoke to WATM about the car and the significance for both him and the organization.

“It’s really important to recognize the leadership skills, knowledge and discipline that veterans can bring to both Dow and RCR, as well as to honor their service to our country,” he said. “Featuring the names of employee veterans and active-duty military is one small component of Dow’s everyday commitment to their diverse workforce and Richard Childress Racing is proud to play a role in recognizing that commitment.”

For this year’s car, the focus point for the company was to highlight the Military Degree Equivalency program which provides an opportunity for individuals with extensive military background, according to its website.

“The MDE program can open up tremendous pathways for talented military veterans. Everyone at Richard Childress Racing is proud to have the opportunity to use the popularity of NASCAR to highlight this initiative,” Galida explained.

The 2021 design includes a special feature recognizing Dow’s VETNET as well as another familiar organization, Team Rubicon. Of the over 1900 heroes’ names on the race car, 200 of them are “greyshirts” – veteran volunteers dedicated to serving those in need, all across the globe.

With his background in the Navy, this commitment is deeply personal for Galida.

“For me, it is gratifying to see how much it means for a vet, active-duty military member, or their family to see the names on the Dow Salutes Veterans Chevrolet. After the unveil, an RCR employee told me his aunt and uncle were there to take a picture of the car for the employee’s grandfather who was in the hospital,” he shared. “They wanted to make sure he got to see his name on the car. It’s also great to be able to honor the work that Team Rubicon does.”

In a statement on the RCR’s website, Art delaCruz, CEO of Team Rubicon, discussed the partnership. “Team Rubicon is thrilled that our veteran volunteers get to ride with Richard Childress Racing and Austin Dillon this July 4th,” he said. “In 2010, our Co-Founder – Jake Wood – saw an unparalleled skill set unique to our nation’s veterans and we’re proud to partner with Dow in its commitment to recognize and elevate this incredible group of men and women.”

It’s a project employees at Dow are excited and proud of, Galida shared. “The Dow Salutes Veterans program has become a staple of RCR’s relationship with Dow and is really a result of Dow and RCR’s mutual commitment to our military,” he explained. “NASCAR is one of the most patriotic sports and using this platform to showcase Dow’s commitment to veterans has resonated.”

As Americans across the country go into Independence Day weekend, they can tune in to watch Austin Dillon race the No. 3 Dow Salutes Veterans Chevrolet in the Jockey Made in America 250 live on NBC on Sunday, July 4, 2021 at 2:30 p.m. ET.