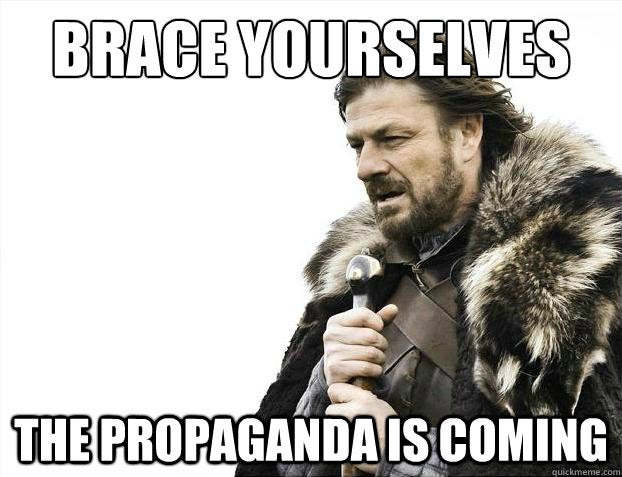 Armed forces across the planet and throughout history have used leaflets for any number of reasons, from psychological operations to warning civilians about an upcoming attack. For most of this time, this kind of messaging has come in the form of slips of paper dropped in enemy territory from the air for the widest possible dissemination.

But times are changing, and the technology of psychological operations, along with the way humans can communicate to mass audiences are changing with it. These days, the kinds of propaganda we use can be sent between audiences who aren’t even technically at war with each other.

One side of this communication may not even know they’re using propaganda. That’s where a new study from the University of Maryland says internet memes are being used as a psychological Trojan horse. Author Joshua Troy Nieubuurt says the meme is the latest in the evolution of leaflet propaganda. It’s easy to get a message across, easy to spread that message and plays into existing biases.

Memes are an easy way to share an idea, a fast way to convey a message and, in some cases, a way for the idea to propagate itself and spread in a viral way, whether the idea or message has any real basis in reality.

They are also readily accepted by those with existing cognitive biases. Humans embrace information that already confirms their view of the world, a phenomenon known as confirmation bias. When someone sees a meme with a message that shares their views, they are more apt to share it.

People are also more likely to accept ideas shared by official sources and famous people, a phenomenon known as popularity bias. In general terms, everyone wants to be associated with a popular idea, and internet memes are no different.

Nieubuurt argues that internet memes and their easy shareability are an ideal tool for disseminating ideas to a wide audience across various social media platforms. Since they can be created, used, disseminated and remixed by anyone with internet access, state actors will naturally have an interest in using memes as part of any psy-op plan.

One of the foreign influence operations to use memes as a tool was the Russian interference campaign in the 2016 presidential election, according to the Internet Research Agency.

But perhaps the best reason for using memes as a tool of propaganda is the relative anonymity of its creator. The more viral a meme gets, the further and further away it gets from its origin. So whether or not the information in the meme is true or if its source lacks credibility, it soon becomes so far removed from the creator, that the sources become almost irrelevant.

In these ways, memes can be used to create and reinforce the legitimacy of certain ideas or policies to the benefit or detriment of political or geopolitical friends and enemies. Whether it aids a political candidate or undermines the government’s coronavirus response, there is always an intended goal in mind for any psychological operations campaign. Memes are just a cheap, easy way to reach those goals.

So the next time you’re considering sharing that viral meme, consider that you might be aiding a foreign intelligence service – and wonder what their goal could be.