8 over-the-top ways troops had fun with their reenlistment 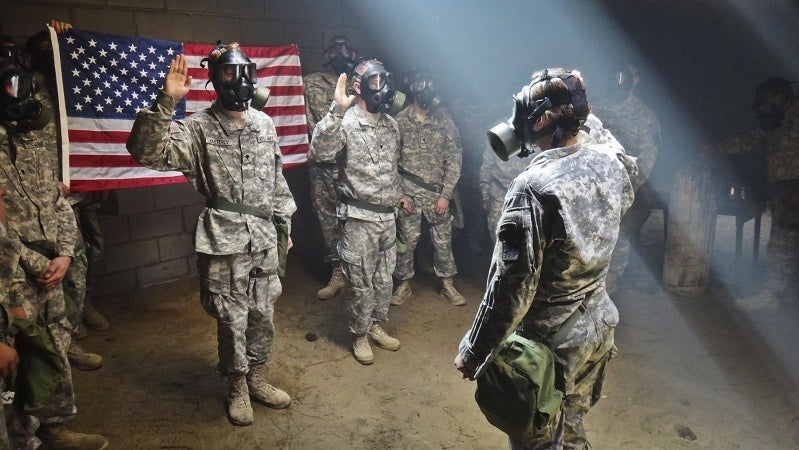 Troops rarely get a say in anything. As a lower-enlisted, your opinion is often discounted and–not to burst any bubbles–as you climb higher, you’ll likely find more of the same. One of the rare exceptions, however, is in determining the conditions of your reenlistment.

Nine times out of ten, a reenlisting troop will say, “screw it, just give me the paperwork” without testing the limits of exactly how far a commander is willing to go to keep them in. Commanders can shoot down the silly requests, sure, but on rare, beautiful occasions, a troop will get exactly what they want.

These are a few of those moments:

While putting out a fire

It makes perfect sense if you’re a firefighter to have your reenlistment in the middle of a simulated fire. The key word here is ‘simulated.’ If it wasn’t, you probably should focus on, you know, the task at hand.

This one seems fitting as you’re tying your career down for a few more years.

Why reenlist before your jump or after you land when you can save time and take the Oath right in the middle?

Deep down, we all know that dude’s reenlistment bonus is going towards video games. Let’s just cut out the middleman and hand the check directly to the guy behind the counter.

At a football game

You and your buddies might as well get free tickets to a football game while you give Uncle Sam a few more years of your life.

In the gas chamber

This may seem like a terrible idea, but with all that CS gas, you can try and pull the “I didn’t make the oath. I was coughing too much!” line if you change your mind.

At the South Pole

On the bright side, they got an Antarctica Service Medal in exchange for giving a few additional years to Uncle Sam.

I’m not even mad. This is just impressive. She forever has a one-up on anyone trying to outdo her reenlistment.

“You just want a reenlistment on the bow of the ship? Oh, that’s neat…”