Stories Behind the Stars: An extraordinary commitment to our fallen World War II heroes - We Are The Mighty

Stories Behind the Stars: An extraordinary commitment to our fallen World War II heroes 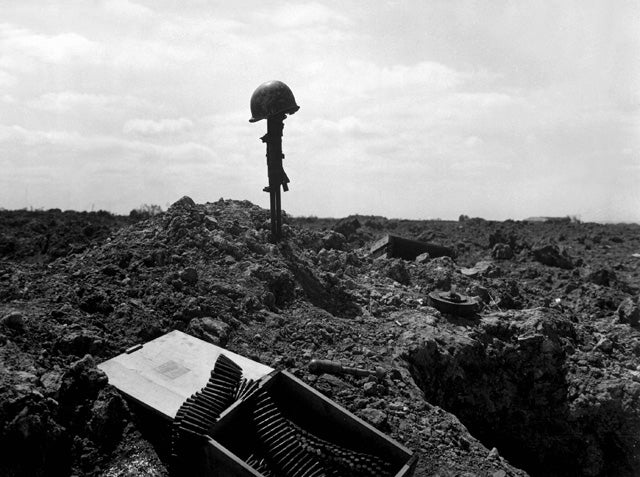 The spirit of the American Soldier: this beachhead is secure. Fellow Soldiers erected this monument to an American Soldier somewhere on the shell-blasted coast of Normandy. Photo courtesy of Center of Military History.

World War II veterans are widely regarded as “The Greatest Generation.” Interviews with the surviving veterans are sacred but one man felt like something was missing. We’d forgotten to tell the stories of the 416,000 heroes who didn’t make it home.

“It always bothered me a little bit that coverage goes to those who survived but we don’t get a lot of attention on those who never made it back,” Don Milne, Founder and Director of Stories Behind the Stars said. He began by using his free time to research and tell the stories of those fallen World War II heroes who’d be celebrating their 100th birthday, if they’d survived.

Milne started with those who died in the attacks on Pearl Harbor, thinking he’d stop there. “I thought that could be my contribution as a memorial to remember these people,” he shared.

But it didn’t end there. When he announced he’d be stopping, those following and reading his stories implored him to keep going. Through research Milne learned about Fold 3, an Ancestry company that saves the stories and records of America’s military. “So we said, why don’t we start saving the stories here and invite other people to do the same,” he explained.

Not long after that, his 30-year role at a bank had been eliminated and he was given a generous severance package. The pandemic had just hit the United States and opportunities for employment were slim. With a year on his hands, Milne knew what he wanted to do with it.

The Stories Behind the Stars was founded as an official nonprofit and he was all in on honoring the fallen of World War II, beginning right at home. “I reached out to the media in Utah and explained what I was doing and my hope to tell the stories of all the World War II fallen in the state,” Milne explained. “I got some good help and ended up with 126 volunteers. Over a six month period we ended up doing all 2,100 stories.”

After that, Milne connected with the National D-Day Memorial in Bedford, Virginia. “We got their list of the 2,502 Americans who died on day one of D-Day. I put the word out for more volunteers…since January until now, these 130 people have been taking time out of their day writing these stories,” he said. “It’s a way to raise awareness…we are hoping enough people will see this and think it’s a fun project to be a part of.”

He hopes that this will reach young people in particular. “As they walk through these fields and scan these graves, they’ll find that many of them are around their age,” Milne said.

A trip to Gettysburg National Ceremony with his grandson would lead to a life-changing teaching moment. Milne said he found the grave of a fallen World War II veteran he’d written about and asked his grandson to figure out how old he was when he passed away.

“He did the math and said ‘He was 16 years old, that’s how old I am!’ and I think that touched him more than more than most because that was an individual that had to lie to get into the Navy, probably because he wanted to support the effort to bring freedom here and around the world,” he shared. “Stories like this will not be forgotten.”

What’s unique about this project and all of these stories is that they aren’t just going on the internet. “We are going to have a smartphone app so that you can find any of these people from World War II and scan their headstone to find and learn their stories,” Milne said. “There’s no reason why we can’t bring the vast knowledge that we have on the internet and make every grave a portal to the stories of the fallen.”

Although covering all of the World War II fallen is a lofty goal, Milne feels confident in being able to do it with enough volunteers. “If we can get a couple thousand volunteers and write one story a week…we can have them all done by the 80th anniversary of the end of World War II in September of 2025,” he said.

Signing up to volunteer is easy and it’s done through their website. As we approach Memorial Day, this is a true way to honor and remember America’s fallen heroes. By telling and sharing their stories, we can ensure that the willing ultimate sacrifice of their lives will never be forgotten.