MIGHTY 25: Meet Michael Grinston, the Sergeant Major of the Army committed to getting it right - We Are The Mighty

MIGHTY 25: Meet Michael Grinston, the Sergeant Major of the Army committed to getting it right 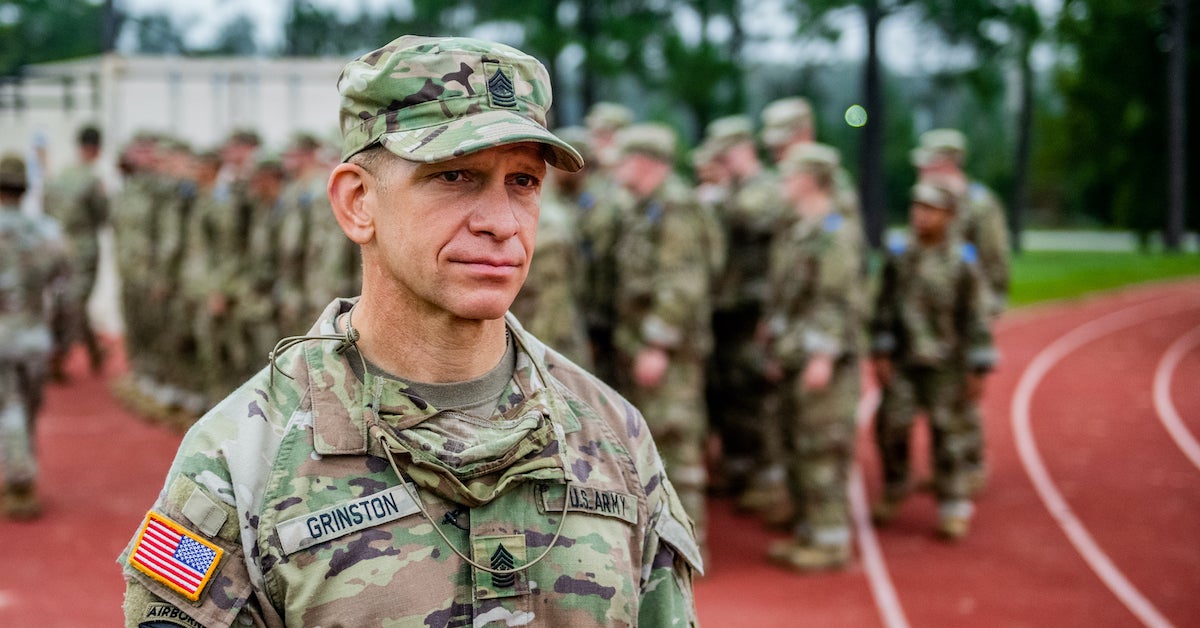 Michael Grinston’s road to becoming the Sergeant Major of the Army wasn’t easy, nor was it planned. A lifetime of overcoming adversity and an unwavering commitment to servant leadership brought him to where he is today.

After coming home from his first year at Mississippi State in 1987, Grinston was looking for a way to continue paying for college. It was during this time that he received a phone call from an Army recruiter. Thinking it was a great way to pay for education – something that was important to him – he signed up. He had no clue he’d begin a career that would span 33 years. “Why did I stay? I think it was a combination of the people, opportunity and even in the end, as you rise in the ranks – it’s to make a difference,” he shared.

It wasn’t limited to making a difference in the Army; Grinston saw the influence he was able to have on the world. He recalled a story of being on his third or fourth deployment during a particularly cold Afghanistan winter. The children there didn’t have coats, something he shared with his daughter. She rallied her school and mailed him jackets for the children in need. It’s a memory that still brings a smile to his face today.

“I saw a jacket that we had bought my own daughter on an Afghan kid. It still warms my heart. With all the bad things in the world that can happen but looking at how you can really make a difference in people’s lives across the world… that’s why I stayed,” Grinston shared.

Not only did his early years in the military teach him the value of serving, humility and resiliency, the Army brought much needed diversity to Grinston’s life. He shared that growing up biracial was difficult, especially as a boy in Alabama. His father was Black and his mother white, something that people around him never let him forget.

“I didn’t know where I fit in the world. I struggled with that for a long time, even in the Army because I look a little different. It was something I was extremely uncomfortable with because people judged me and treated me differently,” Grinston shared. He wouldn’t see a biracial couple in his hometown together in public until he was almost 30 years old.

Grinston has come a long way since then, sharing that he chose to stay focused on being the best version of himself that he could be. Despite his own internal evolution and the mostly welcoming arms of the Army, he felt compelled to share his truth. The death of George Floyd elevated the discussion on systemic racism, especially in the military. With the encouragement of Army Chief of Staff General McConville and others, Grinston recorded a heartfelt video for social media about his experience as a biracial man and soldier in America.

It’s been seen by millions.

Although the attention made him uncomfortable, he said the reaction made it all worth it. “I thought I had this unique story. Growing up you didn’t see people like you and so you tried to blend in as best you could. But then you put it out and you find there are a lot of people like you…Because of what I said – they were able to have these conversations,” Grinston shared.

In his 33 years of service, he’s seen a lot. One thing he was adamant about was how proud he remains of the Army and their commitment to getting it right. “That’s what I love about the Army; every day we are trying to make it better,” Grinston said. Not only does he feel the Army is focused on continually improving the lives of soldiers, but they remain deeply committed to their families too.

When Grinston was told that he’s called “a soldier’s soldier,” he laughed. “To me it’s the highest honor to be called that. When you say ‘a soldier’s soldier’ – it reminds me that I didn’t forget where I came from,” Grinston explained. “I didn’t forget what it’s like to live in the barracks or sleep in the rain in a sleeping bag that wasn’t waterproof. I think it’s really special when people say that to me.”

As he looks back on his life, he has a lot of proud moments with much more to come. Grinston was asked what he would want people to gain from his story and his response was simple. “Have the mentality that one person can make a difference…You have to put some effort into that; you can’t wait for someone else to do it,” he said. “Don’t just say it, do something. If one person helps another person, it compounds over time. What a great place the world would be.”