Four Chaplains Day: Remembering the men of faith who willingly gave their lives during World War II - We Are The Mighty 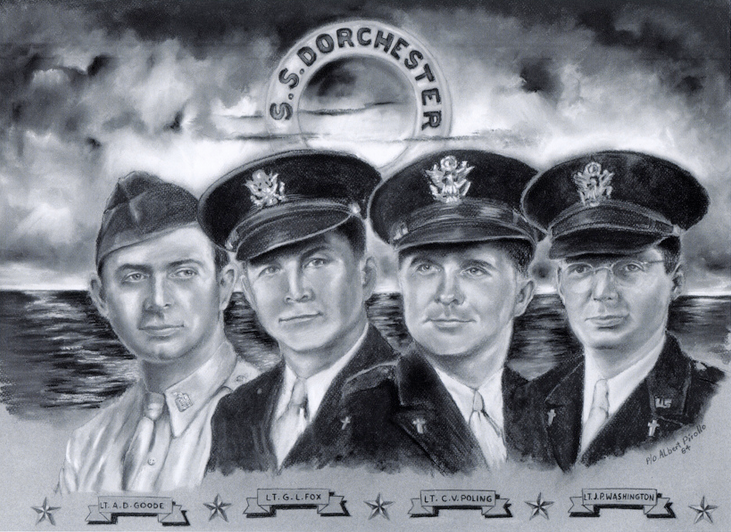 Graphic courtesy of the American Legion.

The stark vision of the Four Chaplains with linked arms praying while their ship sank 78 years ago lives on. Today, we honor their courage, devotion and ultimate sacrifice.

It was two years after the United States entered into World War II. The Four Chaplains – who would leave an extraordinary legacy – boarded the SS Dorchester, all coming from completely different backgrounds but completely united in a commitment to bring spiritual comfort to their men.

Chaplain George Fox was a veteran of World War I, having served as a medic. He was highly decorated, having received the Silver Star and Purple Heart for his service. Fox had lied about his age and was just 17 years old when he left for war. When he returned, he finished high school and went to college. He was eventually ordained a Methodist minister in 1934. When war came calling, he volunteered to become an Army Chaplain. On the day he commissioned, his son enlisted in the Marine Corps.

Chaplain and Rabbi Alexander Goode earned his PhD from Johns Hopkins University in 1940, while finishing his studies to become a Rabbi – like his father before him. After the attack on Pearl Harbor, he applied to the Army to become a Chaplain. In 1942, he was selected for Chaplains School at Harvard.

Chaplain Clark Poling was the son of a minister and was ordained as one for the Reformed Church in the late 1930s. After war broke out, he was called to serve. His own father had served as a Chaplain during World War I. He headed to Army Chaplains School at Harvard.

Chaplain John Washington was ordained as a Catholic Priest in 1935, having served the church all his life in some form or another. When the war began, he received his appointment as an Army Chaplain.

All four men from different corners of the country and varied faiths, met at Harvard in 1942 and became friends. A year later they’d be on a ship together, all ready to serve.

On February 3, 1943, the civilian liner SS Dorchester, which had been converted for military service, was en route to Greenland with 902 military members, merchant marines and civilian workers. It was being escorted by Coast Guard Cutters Tampa, Escanaba and Comanche. It was a chilly morning as the new day began and the water temperature was hovering around 34 degrees with an air temperature of 36 degrees.

The Coast Guard alerted the captain of the Dorchester that U-Boats had been sighted and he ordered the crew to sleep in their clothes and life jackets. Most of them ignored it though, because it was either so hot down below or they couldn’t sleep well with the life jackets on.

At 12:55am, a German torpedo struck their ship.

A large number of men were killed instantly from the blast and many more critically injured. It knocked their power and communications out, leaving them unable to radio the other ships for support. By some miracle, the CGC Comanche saw the flash of light from the explosion and headed their way to help. They had radioed the Escanaba for added support, while the Tampa continued its escort of the fleet.

According to records, panic and chaos had quickly set in. Men began throwing rafts over and overcrowding soon set in, causing capsizing into the frigid waters. But four Chaplains became a light in the dark for the terrified men. They spread out throughout the ship comforting the soldiers and civilians, bringing order to the frenzy. As the life jackets were being passed out, they ran out.

The Four Chaplains took theirs off, giving them to the men.

Engineer Grady Clark witnessed the whole thing. Each Chaplain was of a different faith, but worked in unison to serve and save the men.

Despite their orderly work, the ship continued to sink. They helped as many men as they could. When it was obvious the ship was going down, the Chaplains linked arms and began praying together. It was said that the crew in the waters below could hear hymns being sung. Survivors would later report hearing a mix of Hebrew and Latin prayers, melding together in a beautiful harmony as they went under, giving their lives to save the rest.

Before boarding the ship and leaving to serve, Chaplain Poling asked his father to pray for him. The words were poignant and a deep insight to the character of the man he was and those he died alongside. He asked his father to pray “Not for my safe return, that wouldn’t be fair. Just pray that I shall do my duty…never be a coward…and have the strength, courage and understanding of men. Just pray that I shall be adequate.”

Although many fought for these brave men to receive the Medal of Honor for their bravery and heroism, the stringent requirements prevented it from happening. They all received the Purple Heart and Distinguished Service Cross. In 1961, Congress created the Special Medal for Heroism, The Four Chaplains Medal. It was given to them and them only, never to be awarded again.

On this Four Chaplains Day, we remember.