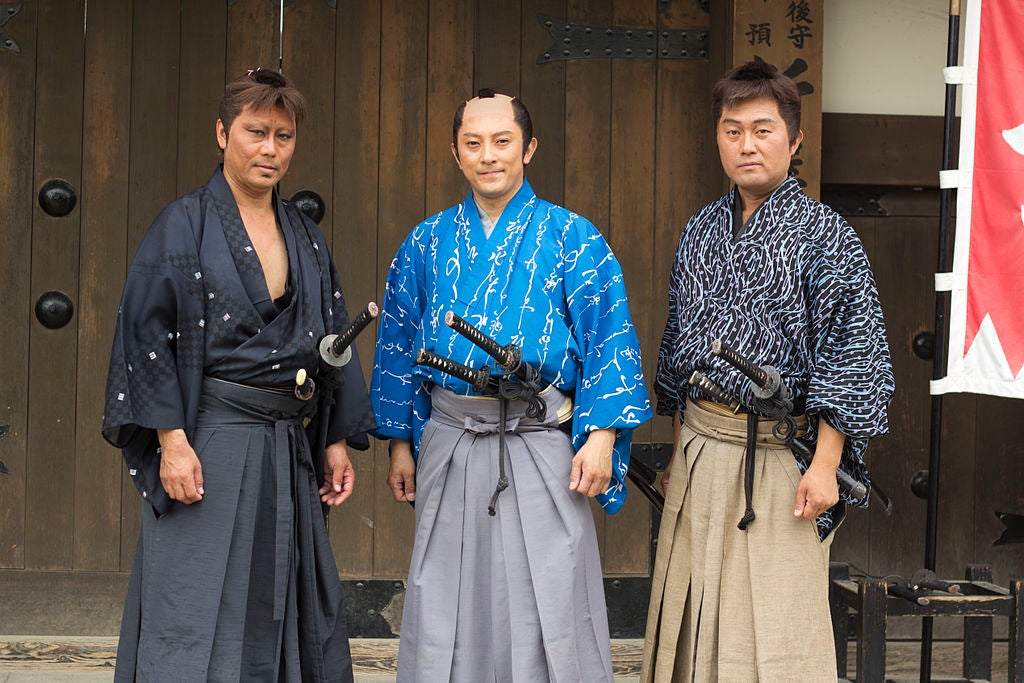 Three actors at the Eigamura theme park / film set in Kyoto. The one in the middle is the good guy - the employed samurai - the other two are dastardly ronin.

“Rōnin” ordinarily means a wave man, a wanderer or drifter. A rōnin referred to a samurai soldier in archaic Japan who did not have a lord or a master. There are various ways a samurai warrior would end up becoming a rōnin.

One of the ways was when the warrior’s master died when his enemies killed him in a civil war or were forced to kill himself. At the same time, when the warrior’s master falls from power or loses a battle, the warrior loses his master’s patronage or favor. A samurai warrior without a master was considered shameful as it was the equivalent of an unemployed man in today’s modern society. So, the rōnin in feudal Japan had a sense of failure.

One of the reasons it was dishonorable to be a rōnin was their low status in society. In feudal Japan, rōnin were perceived as failed men with no honor. According to the Code of the Samurai, when samurais lost their masters, they were expected to show their respect by killing themselves using the hara-kiri method.

The hara-kiri method, also known as Seppuku, was a ritual act where samurais would commit suicide by using a short blade for self-disembowelment. It involved plunging the blade into the abdomen, slicing from left to right, and then turning it upward to pierce their throat.

The ritual was designed for samurai warriors to show honor to their deceased masters. However, some warriors failed to perform the ceremony, and their failure to do so made them perceived as shameful and cowardly.

Nevertheless, failure to perform the Hara-kiri was an exception to the 47 Rōnin, who decided to stay alive to avenge the death of their master. Once they had concluded their revenge, the forty-seven rōnin killed themselves as demanded by the Code of the Samurai. Although their acts were unlawful, they were regarded as the embodiment of loyalty and service to their faller master.

If the rōnin were cast off by their masters, they had to seek alternative employment.

Since they were still armed, they constantly joined squabbles, turned to banditry, operated gangs, ran brothels and illegal gambling shops. At the same time, the rōnin thronged to join any combatant who raised the battle flag and required more warriors to fill up his armies. These acts made the rōnin have the image of dangerous criminals.

In feudal Japan, being a samurai warrior was the epitome of chivalry and honor. So, occupations such as farming, fishing, merchants, labore, and artisanry were frowned upon. As rōnin were unemployed, they resorted to such careers to fend for themselves. Taking up such jobs lowered the reputation of the warriors and their status in the community.

Samurais always had two swords; however, they still had their swords when they got disowned and became rōnin. The Japanese believed that a warrior’s sword was his soul due to the deep attachment, adornments, and the battles the weapon fought.

As rōnin had no means of generating income, they had to sell one or both swords when they fell upon challenging times. According to the Japanese, selling one’s sword felt like disposing of or selling one’s soul, which was contemptible.

Once a samurai warrior became a rōnin, they stopped abiding by the Code of the Samurai, lost all their previous honor, and were looked down upon by society. Despite that, some rōnin still retained their integrity, such as Miyamoto Musashi, the Chushingura, Sakamoto Ryoma and Yamada Nagamasa.