This is how the Roman army defeated Attila the Hun 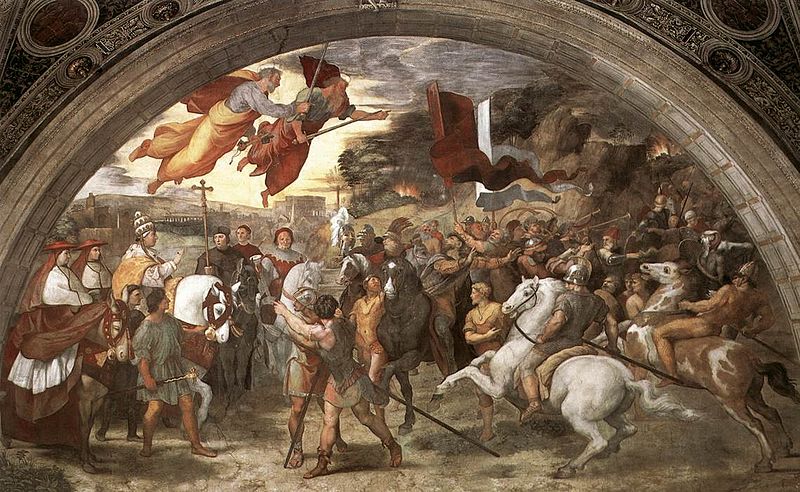 Raphael's The Meeting between Leo the Great and Attila depicts Leo, escorted by Saint Peter and Saint Paul, meeting with the Hun emperor outside Rome. (Wikipedia).

Attila the Hun was a famous leader of the Hunnic Empire reigning from 434-453 A.D and was also referred to as Flagellum Dei. Attila’s reputation of brutality preceded him, therefore was well known to the Romans. He is one of the most vicious rulers in history, having succeeded in expanding the Huns’ rule and maintaining an almost-perfect record on the battlefield.

Unlike the uneducated Barbarians of Hun, Attila was born into the most powerful family in the North of River Danube. His close relatives had jointly ruled the Empire between 420-430 A.D., making him a famous young man. Attila and his brother Bleda were well-trained in sword fighting, horse riding, archery and horse care. Additionally, they were fluent in Latin and Gothic and skillful in diplomatic and military tactics. It is believed that the two brothers witnessed their uncles receiving Roman ambassadors.

Attila’s peace treaty with the Romans

After their uncle passed on in 434 A.D., the two brothers inherited the Hun Empire and ruled as equals. The first diplomatic action they took was negotiating a treaty with the Byzantine Empire (Eastern Roman Empire). Part of the agreement was that Emperor Theodosius II was to pay 700 pounds yearly to sustain peace between Romans and Huns. A few years later, Attila accused the Romans of neglecting their duty, leading to ruthless attacks in the Eastern Roman City. Hun’s soldiers were determined to conquer Constantinople, and so Theodosius had no choice but to negotiate. They agreed that Theodosius would pay Attila 2100 gold pounds yearly.

After the second treaty, the Huns soldiers went back to their country and years later; Attila decided to challenge his brother so he could be the sole ruler of the Huns. In 444, Attila arranged the assassination of Bleda, and since he was an ambitious man, he led an attack on the Eastern Roman Empire. He led his army into Greece, where they met with the Romans in Thermopylae. Here, they negotiated another complicated treaty with worse conditions for the Romans.

In 450 A.D., during spring, Honoria, the sister to Valentian III, sent Attila a ring requesting his marriage hand. She wanted to evade the arranged marriage with a Roman aristocrat whom she was being forced to marry. Despite having many wives, Attila took the matter seriously and went to claim his newest bride. Since Honoria had proposed to Attila, he expected to get dowry payment in form of land. The emperor was furious because he thought his sister was ambitious and intended for it to happen. Honoria was married to the boring Roman aristocrat in the end, and this made Attila angry.

He did not give up quickly, and so his subsequent two military campaigns were in the name of Honoria name. So in 451, Attila sent, and his mend invaded Gaul, killing and devastating the Romans. King Theodoric I of Visigoths and General Flavius Aetius joined their forces and confronted Attila in the momentous battle of Catalaunian Plains.

This was when the great leader Attila of the Huns was defeated, making it the bloodiest war. When Attila saw that he had no chance of winning the battle, he withdrew his forces and returned to his Empire. Theodoric was killed on the battlefield, but his death paid off because the enemy was defeated. Being an ambitious man, Attila was never discouraged by the defeat. Instead, he organized an invasion into Italy the following year after recruiting more men to his army. The Catalaunian battle was the only time in history Attila was defeated.