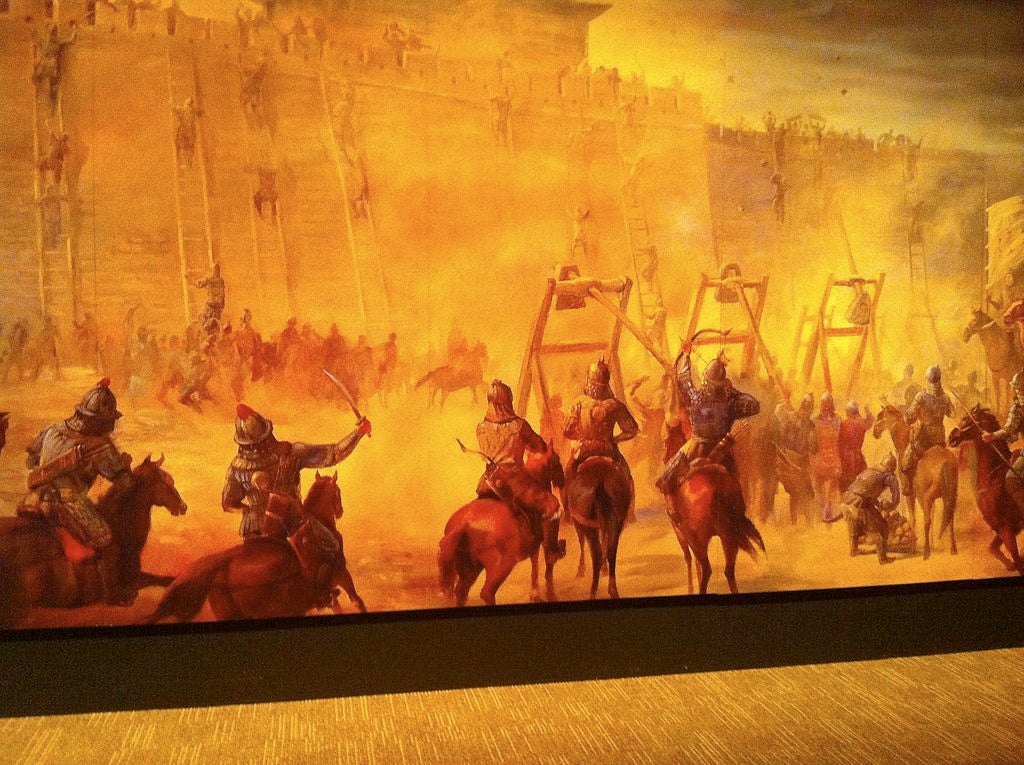 The man who would become the ruler of the Mongols had the birth name Temujin, which means “blacksmith,” and it epitomized how he would confront everything with an iron fist. While “Khan” is a traditional title meaning a “ruler” or “leader,” scholars are still uncertain of the origin of “Genghis.” From an early age, Genghis Khan was forced to cope with the brutality of life. Rivals poisoned his father when he was young and he was even forced to kill his brother in a dispute over food.

For such an influential ruler, no enemies of his Empire would have survived. There is little yet still contradictory information about how he would annihilate rival empires, but what remains is that he rarely left a score unsettled. Some of his high-ranking generals were former enemies, and he often promoted people based on abilities.

The Great Khan gave other kingdoms the chance to submit to his rule peacefully, and he never hesitated to annihilate any society that resisted. Aside from the former revenge campaigns against the Khwarezmid Empire in 1219, the most profound revenge was tactfully carried out in Bamiyan City when his grandson, Mutukan Khan, was killed in battle.

The siege of Bamyan by the Mongol Empire under Genghis Khan occurs in 1221. It took place when the Mongols were after the last ruler of the Khwarezmian Empire and his newly-recruited forces in Afghanistan.

The initial conflict began in 1219 that marked the Mongol conquest of Islamic states. Ironically, Genghis Khan did not intend to invade the Empire as he had sent the ruler of the Khwarezmian empire a message, referring to his greatness as “the rule of the rising sun.”

Khan’s invasions to China involved nothing more than nomadic invasions without any bloodshed. It is only after the attack and annihilation of the Khwarezmian Empire that the Mongols would earn their trait of blood-thirsty ferocity. The Mongolian ruler introduced tactics that would be used in the second world war – indirect assault and utter destruction of the population.

The Mongolian Empire bordered the Khwarezmid kingdom, and the Shah had recently taken some of the territories under his control and had a dispute with the Caliph in Baghdad. Given that he refused to pay homage to the Caliph as the Islamic leader, he got many problems in his Empire’s southern border.

It was at this border that the Shah’s Empire made contact with the rapidly expanding Mongolian Empire. Historians believe Khan wanted to take advantage of the growing instability. Still, there is also a possibility that he saw the benefit of forging a commercial alliance with the Khwarezmid Shah.

However, the Shah was very suspicious of the Khan’s proposals, given that he had heard the brutality with which he assaulted rival kingdoms. His suspicion was nothing further from the truth.

In what was termed an official attempt to establish trade ties with the Shah, Genghis sent a 500-man caravan to the Khwarezmid empire. However, the Shah ordered his men to arrest the fleet, claiming that they were a conspiracy against his Empire. It didn’t seem that the Khan was trying to provoke the Shah, and neither did the caravan appear to be spies. Genghis Khan dispatched the second group of three ambassadors, two of whom were shaved and the other beheaded.

In his pursuit for the Shah’s army, the Khan’s grandson was killed on the battlefield by an arrow from the walls. This realization that his grandson was mortally wounded enraged the Khan so much so that he utterly destroyed the Khwamerzian army. Ghengis Khan then had every living person executed. The current population is descendants of those warriors known as the Hazara people. Based on the cries of the Khan’s murdered victims, the battlefield is still termed the “city of screams.”