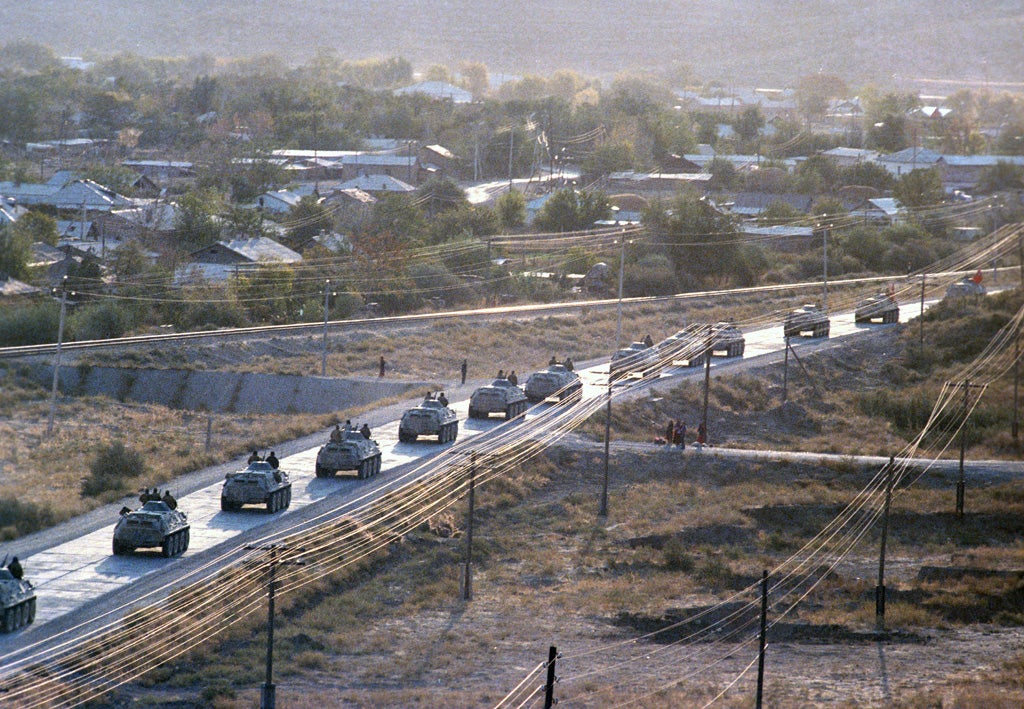 Afghanistan is sometimes referred to as “Russia’s Vietnam.” The decade-long occupation cost the Soviet Union a lot of men and money but wielded very little in return. In 1978, the Soviets backed a pro-communist coup lead by Nur Mohammad Taraki against the government in power in Afghanistan. However, in 1979, Hafizullah Amin, a Muslim leader who did not look at the Soviet influence with a good eye, staged a counter-coup, deposing Taraki. In retaliation, in December 1979, the Soviets sent troops and tanks into Afghanistan. They overthrew the government and killed Amin, replacing him with a KGB-trained man named Babrak Karmal.

After some early victories, the Soviets anticipated a quick triumph. However, they faced relentless resistance from some of the locals, particularly the Muslims. The Afghan rebels declared a jihad (a “holy war”), against the communist government and the Soviets supporting it. The mujahideen, “holy warriors” who lead the jihad began a guerilla-style campaign against the Soviets, harassing and sabotaging them at every turn. They were armed and financed by countries from the other side of the Iron Curtain, such as the United States and Britain, as well as Muslim countries sympathetic to a government closer to their own beliefs. China, despite being a communist country as well, also chose to side with the mujahideen.

The invaders struggled to contain the well-armed rebels. According to some estimations, the Soviets could have lost as many as 15,000 soldiers during the decade-long invasion. The cost of lives and resources brought important division in the Soviet Communist Party at the time. The invasion also brought the already tense relationship between the Soviet Union and the USA near breaking point.

After a decade of frustrating fighting, the Soviet Union, incapable of truly seizing power in Afghanistan, decided to recall its troops. The withdrawal started in April 1988 and spread over several months. The last Russian soldiers left in February 1989.

Although this was a notable win for the mujahideen, peace still eluded the country. The Soviet Union still supported the communist government through financial means, helping them resist the rebels. It led to a long and bloody civil war. The Soviets only withdrew their support in 1991, after internal political turmoil forced them to cut off the aids to their allies. By spring 1992, the Muslim fighters were able to overrun the weakened Afghan army, storm Kabul, and overthrown the government.

However, Afghanistan was unable to receive much-needed peace. Whether differences of beliefs or desire for personal power, the various mujahideen factions began turning one against the other. Without a common enemy, they perpetuated the ongoing civil war. The conflict gave rise to the Taliban in 1994, a military organization of radical Muslim students. They were unhappy that the Muslim law had not been established throughout the country after the fall of the communist government. The group, in possession of many weapons supplied by various Western and Middle-Eastern countries during the Soviet invasion, was able to progressively conquer territories. By 1996, they controlled about three-quarters of the country and established the Sharia law in all the territories they controlled, establishing the Islamic Emirate of Afghanistan. By 1998, they controlled over 90% of the country.

Echoes of the past

In 2000, the United Nations Security Council denounced the strict application of Sharia Law that infringed on people’s basic human rights and accused the Taliban of radicalizing and training terrorists, issuing important sanctions against their government. Then, in October 2001, in retaliation for the 9/11 terror attacks, the USA joined forces with the Afghan resistance and invaded Afghanistan to try and root out terrorism. By the end of 2001, the Taliban government had been overthrown and most of the country was under the control of the coalition. After losing their last stronghold, Kalahar, the Taliban dispersed. However, they never surrendered.

Moving factions of the Taliban, Al-Qaeda and ISIL have since worked to harass and sabotage the Afghan government and the American troops supporting the anti-terrorist effort. Pakistan, accused of supporting the terrorist organizations, was also invaded.

However, guerrilla fighting presents many challenges, making it difficult to achieve a definite victory. The metamorphosing, secretive structure, and foreign financing of the various extremist organization make it difficult to eradicate them. When the Soviet Union pulled out of Afghanistan, they inadvertently created the modern terrorist.