This is what the writing on the Taliban flag means 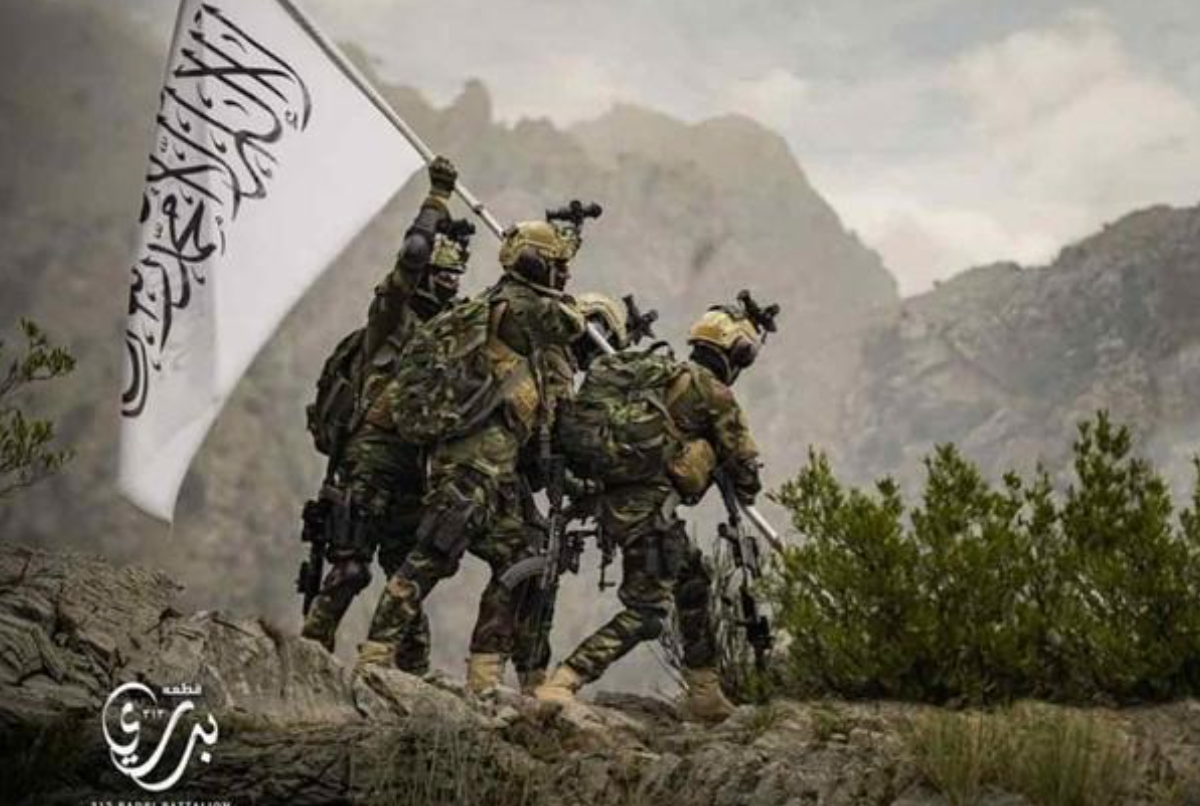 Taliban fighters raise their flag in Afghanistan as part of propaganda campaign, aimed at desecrating the image of Marines raising the U.S. flag at Iwo Jima. (Image: Taliban via Twitter).

For more than two decades, the Taliban flag has been a symbol of dominance as a terrorist militia of Afghanistan. Earlier this month, civilians in Jalalabad protested the Taliban rule following the move by the US to withdraw troops from Afghanistan. Demonstrators in the streets removed the white and black symbols and replaced them with Afghan’s red, green and black multicolored Afghan flag to show their resistance.

Taliban militia had gained control of the northeastern side for over four days before they were hit with massive resistance along with negotiation by local leaders. With the Taliban threatening to distill Afghan values into the unsettling writing on their flag, it appears that this emblem will be marked with bloodshed. What does it mean?

Who are the Taliban?

The Taliban militia first arose in the winter of 1994 following the withdrawal of Soviet forces from Afghanistan in 1989. Initially, the Soviet Union invaded the country in 1979, rooting their communist ideologies, but met with exceptional resistance. Ultimately, the Soviets were defeated by Islamic fighters called the Mujahedeen in a proxy cold war.

The victory was, however, short-lived as the different factions who disagreed started fighting, which led to civil war. Following the brutal civil war in which thousands were killed, the Taliban emerged with a promise to restore Islamism’s core values and drive off the warlords. Within months of intense warfare, the Taliban took over most of the country.

The Taliban used an Islamic state flag with white and black inscriptions known as the Shahada written on it. The Shahada is an Islamic proclamation within which the five core principles of Islam are rooted in words that say, “I bear witness that none deserves to be worshiped except God, and I bear witness that Muhammad is a messenger of God.”

In addition to all Muslims reciting this proclamation, they accept it to be true. Anyone unable to make this proclamation is not considered Muslim. In daily and legal senses, the Shahada embodies observation, witness and giving good testimony. There has, however, been some resistance in the adoption of the Taliban flag, with many people within and outside Afghanistan using the inscriptions to symbolize defiance.

The rule of an iron fist

Since the Taliban captured Afghan as an Islamic state in 1991, they have imposed harsh interpretations of the Quran along with brutal public punishments, floggings and mass executions. The militia has also shown an utter intolerance of different religious practices, first implemented by destroying the Great Buddha’s Tower of Bamiyan. Although considered an object of wonder around the globe, the militants’ leader maintained that the destruction was holy and that it is easier to destroy than to build.

With this rule came a framework of modern government, including ministers and a well-outlined bureaucratic system. At the street level, however, there was a religious edict at the height of individual commanders that dictated the everyday life of Afghans.

What it means for girls and women

Principles founded the Taliban ideology with strict guidelines regarding women playing the most prescribed roles in society. When they first got power, they barred women and girls from going to school, taking on jobs or leaving their homes with faces uncovered.

Since the US forces toppled the Taliban rule, millions of Afghan girls have had colossal gains in their public life, political and school progress. Yet, even in government-controlled areas, these gains are insufficient and fragile. Although recent research by Human Rights Watch has shown a widespread acceptance of education, the Taliban rule has deeply rooted insecurity, family resistance and community impediments.