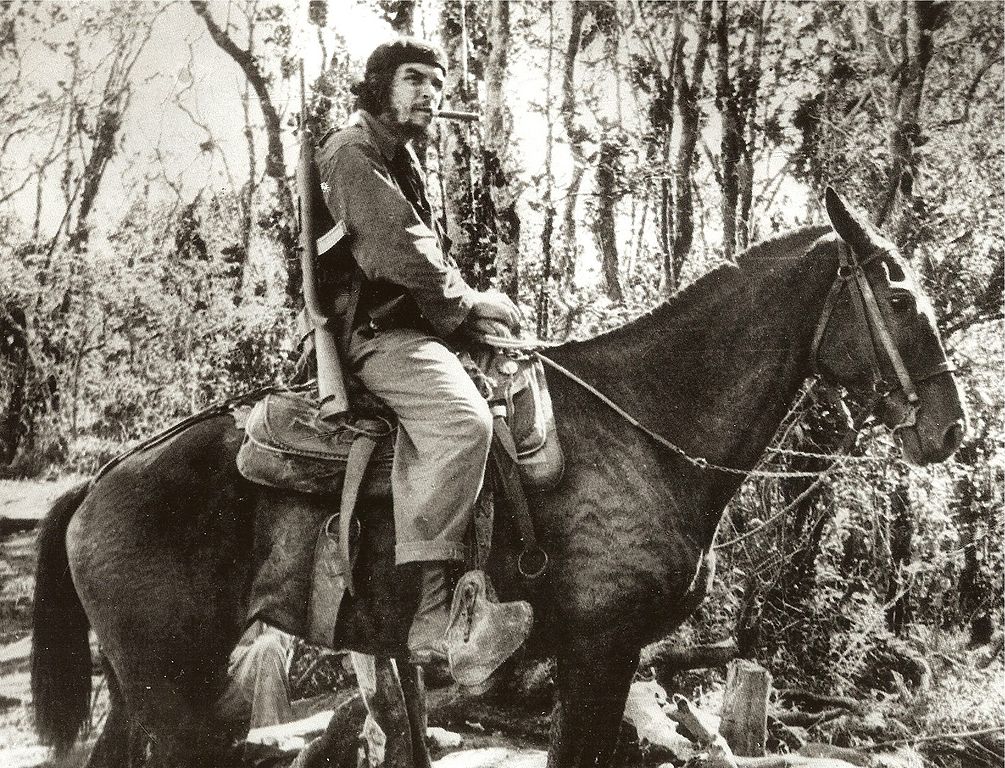 Guevara with a Cristóbal Carbine on a mule in Las Villas province, Cuba, November 1958.

For most people, wearing an EL Che Shirt is a fashion statement, while it is more of a political statement to others. At the same time, most people perceive Che as a revolutionary leader who sacrificed his life for the sake of his people. He campaigned to free the Americas from US imperialism, hence viewed as a Latin American hero. The man committed several unlawful acts to do this, therefore the state of his title is still not clear. Most Americans view Che as a murderer as he killed hundreds of men, women, and children while fighting for his course. If that isn’t reason enough, this is why you should not wear it. No matter how many designs they have at Hot Topic and Spencer’s Gifts.

Why Some Americans Hate These T-Shirts

During his campaign to free the Americas from US imperialism, Che used barbaric means that led to many deaths and injuries on innocent people. He fought so hard for his campaign that he eventually gained a symbolic victory over the US. It didn’t matter if the victims were men, women, children, or persons with disabilities. The firing squad killed everyone they found on their way if you were pro- America.

Considering Che was already granted victory, it did not make sense why he decided to attack innocents with such brutality. While some Latinos view him as a hero because of his political speeches, Che had no right to kill the innocent people in Cuba. This is a barbaric act and should not be celebrated by wearing those cringey T-shirts. These are mostly worn by those who have no clue about the Cuba situation led by Che that left hundreds dead.

Wearing an El Che shirt or garment is like putting on a Hitler shirt stating its okay to slaughter Americans. According to Che’s famous statement, he felt like he had to be hated by many to be a great revolutionary, explaining why he ordered massacres against Americans even though he already ‘won’. Therefore, those who wear the image of Che clearly embrace hatred of our country as passionately as he did.

Before wearing any image on a shirt or garment, it is crucial to learn its story. Like Che’s image, some have terrifying backgrounds and should not be admired by anyone. It is such a disappointment that Che has gained so much admiring over the years in the US, even after releasing educative films such as Motorcycle Diaries that feature Che as the main character. At this point, we can see how ignorance can completely annihilate society.

You’re not edgy by wearing it in formation, its un-American

Most people appear to be oblivious to Che’s ignominy, the various cultures he shattered, the tyranny he propagated, and, most significantly, the innumerable individuals who died under his direction. Che Guevara was not even close to Robin Hood as he did not care about the innocent. The CIA dramatically killed him after ordering the firing squad to attack Pro-American Cubans. He was a power enthusiast who managed to blind the world with a false course and velvet words. The world at that time perceived him as a law enforcer fighting for the Americas, but it was soon discovered that he was a ruthless killer.

Though he might have genuinely intended to free Americas from US so called imperialism, he grew into a different man who knew nothing but violence. Historians claim that he was genuinely concerned about the Americas when he was younger and was changed by the inequality witnessed during his lifetime. Che Guevara once declared at a UN General Assembly that he would continue with executions in Cuba because they were necessary and meaningful. For such reasons, it would be wrong for any American to admire El Che or honor him by wearing a shirt with his image. So the next time a troop wants to be a cringey neckbeard and wears it, NJP him with the full force and depth that the green weenie will allow. Would you allow someone to wear a Taliban shirt with the image of Bin Laden stating ‘death to America’? Without exaggeration, its the same thing.