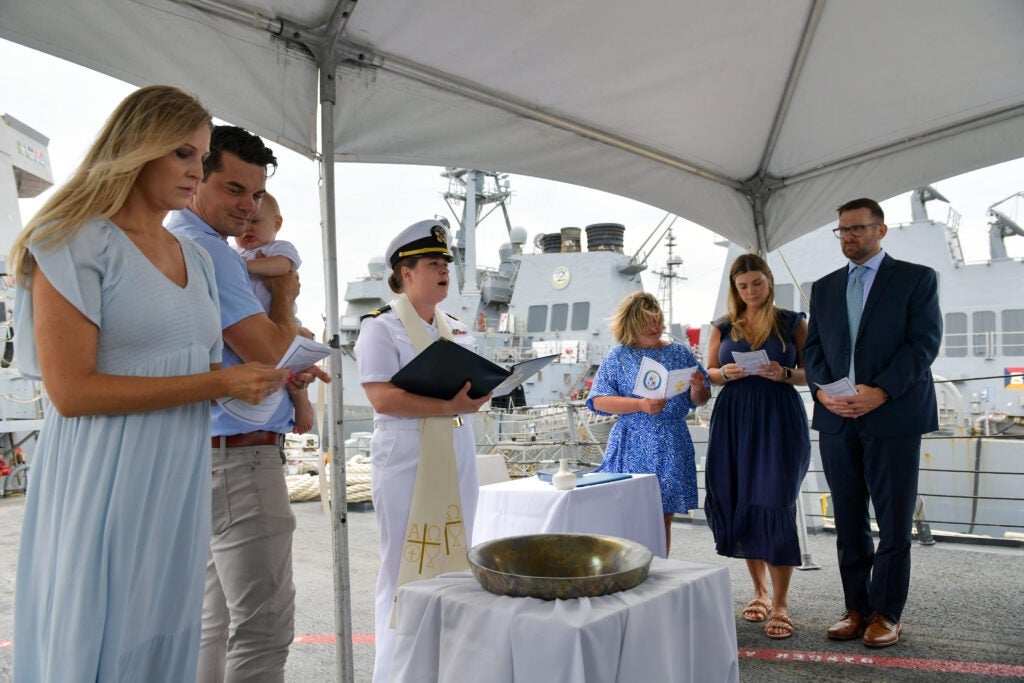 The U.S. Navy places great emphasis on its culture and traditions. One such tradition is the bell baptism, which traces its roots back to the British Royal Navy. When a ship was underway or in a foreign port and a baptism had to be performed, the infant or child was baptized onboard using the ship’s bell. Following the baptism, the child’s name was engraved on the ship’s bell and remained until the ship was decommissioned. The tradition persists in the modern U.S. Navy, including one ship that hosted the baptism for two of its namesake’s descendants.

Capt. John Francis Laboon served as a submariner during WWII. Then-Lt. J.G. Laboon earned the Silver Star while serving aboard the USS Peto (SS-265) in the Pacific. Just a few miles off the coast of the main Japanese island, Honshū, Peto recovered a downed naval aviator. The sub’s crew then spotted his wingman and moved to rescue the second aviator.

However, the water was shallow and mined, preventing Peto from maneuvering closer. Additionally, the ship was under heavy fire from a Japanese coastal artillery battery. Before the sub even stopped, Laboon dove into the water. Dodging the enemy artillery shells and sea mines, he reached the stranded pilot and swam him back to the ship. For his bravery, Laboon was awarded the Silver Star.

After WWII, Laboon left the Navy and joined the Jesuits to become a priest. He was ordained on July 17, 1956 and returned to the Navy as a chaplain. He went on to serve in Vietnam where he earned the Legion of Merit with a Combat “V” while serving with the 3rd Marine Division. Father Laboon retired from the Navy as a Captain, Fleet Chaplain, U.S. Atlantic Fleet in 1980. He passed away eight years later. However, his legacy is preserved in the Arleigh Burke-class guided-missile destroyer USS Laboon (DDG-58).

The first namesake baptism aboard the Laboon was that of Liv Malone Laboon, Father Laboon’s great-grandniece, on August 28, 2018.. Her bell baptism was performed by the ship’s chaplain, Lt. Mark Cook. Moreover, the baptismal water was a special composition of saltwater collected from every body of water that the ship operated in on its last deployment. “In a sense, now, she has traveled with us on our most recent deployment, not only by her name, but now symbolically through the water we have collected,” Lt. Cook told WTKR. In keeping with tradition, her name was engraved on the ship’s bell.

On August 5, 2022, another Laboon descendant was baptized aboard the ship. Blaze Michael Laboon is Laboon’s great-great-grandnephew and was given a bell baptism aboard the Laboon. His baptism was performed by the ship’s chaplain, Lt. Alisa Harl. “The opportunity to baptize a namesake or legacy baby is tremendous,” she told the ship’s public affairs. “Being a chaplain aboard a ship named after a chaplain, I find it to be a very sacred privilege and opportunity to come alongside his family, to be able to provide this space for them and to be able to share this community, this team.”