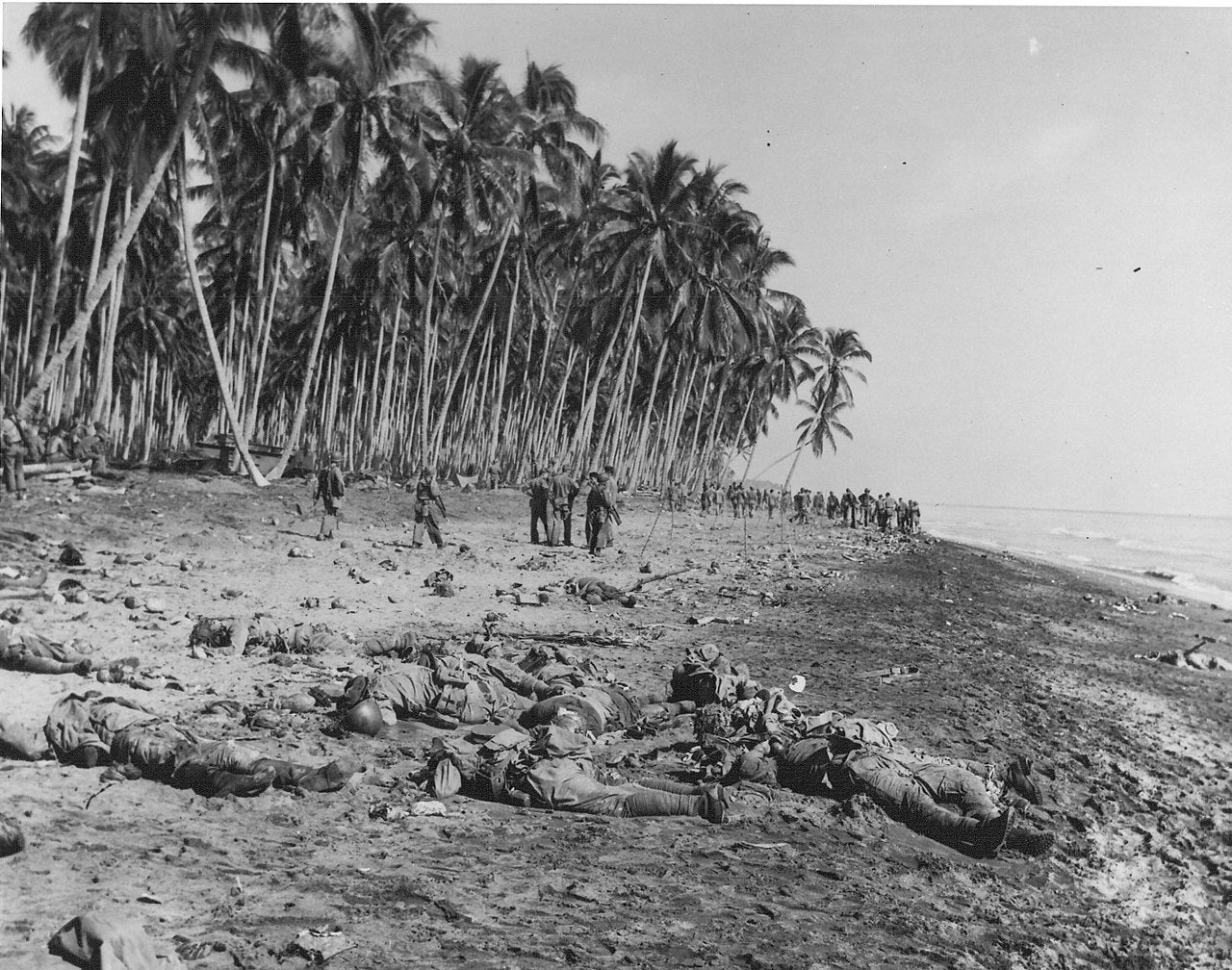 Deceased Japanese soldiers lie on the sandbar at the mouth of Alligator Creek on Guadalcanal on 21 August 1942 after being killed by U.S. Marines during the Battle of the Tenaru. (Wikimedia Commons).

On December 9, 1941, Al Schmid was in Philadelphia working as an apprentice steel burner. He was listening to the radio on Monday, December 8 when he learned about the Japanese attack on Pearl Harbor. He enlisted in the Marine Corps the very next day.

Schmid trained to be a machine gunner in the 1st Marine Division and by August 1942, he was landing on Guadalcanal with his fellow Marines. It was the first major American land offensive of the Pacific War and the Japanese were now about to get their first taste of fighting United States Marines.

Guadalcanal wasn’t just the first major land offensive, it was an important stepping stone, a stop off point for the coming invasion of Rabaul, and caught the Japanese completely by surprise. Private Schmid was manning an M1917 Browning heavy machine gun with two other Marines in his crew.

Schmid’s foot was already infected but he refused to leave his gun crew behind. It was soon to be the least of his problems. By August 21, the capture of Guadalcanal was slowly progressing and Schmid and the 1st Marines were defending one of the island’s most important features: Henderson Field.

Henderson Field was an all-important airstrip on the island. From there, Marine Corps aircraft could create major problems for the Japanese forces on the ground and in the air. Aircraft battled over the field on a daily basis, but the Japanese had to fly eight hours just to get there. Control of the airfield was critical.

The airfield was behind a perimeter set up by the 1st Marines. If the Japanese wanted to take it, they had to go through the 1st Marine Division first, so they sent an attack force of 800 of its best troops to dislodge the Marines and retake the field that night. At 0300, flares lit up the battlespace and their nonstop assault began.

It wasn’t long before one of his gun crew members was killed in the fighting, so Private Schmid took over. Schmid kept the gun firing for more than four hours as the Japanese forces attempted to make a breakthrough beyond the Marines’ perimeter. Soon, his other gunner was wounded and Schmid also had to take over reloading the belt-fed weapon.

Schmid, the last of the unharmed gun crew, fired the weapon in short bursts to keep it from overheating and to prevent any jamming. Still the barrel of the gun began to glow red hot. As he fired, a Japanese soldier threw a grenade into Schmid’s nest. It went off, wounding him in the hand, arm and face. Schmid was not only wounded, he was blinded by the blast and could no longer see.

That didn’t stop the Marine from Philadelphia. His remaining crew member helped guide Schmid in manning and reloading his machine gun. The Japanese assault continued but Schmid kept firing. When the smoke from the battle cleared the next morning, some 200 enemy troops lay dead in front of Schmid’s machine gun. He and his fellow gunner killed a fourth of the attacking Japanese troops. Only one Japanese soldier walked away from the assault without wounds and the assault force commander committed suicide.

Schmid, along with the gunner who survived the fighting, Cpl. Leroy Diamond, and his other crew member who was killed early in the fighting, Pfc. Johnny Rivers, were all awarded the Navy Cross for their heroic defense of the perimeter and for keeping the Japanese from threatening Henderson field that night.