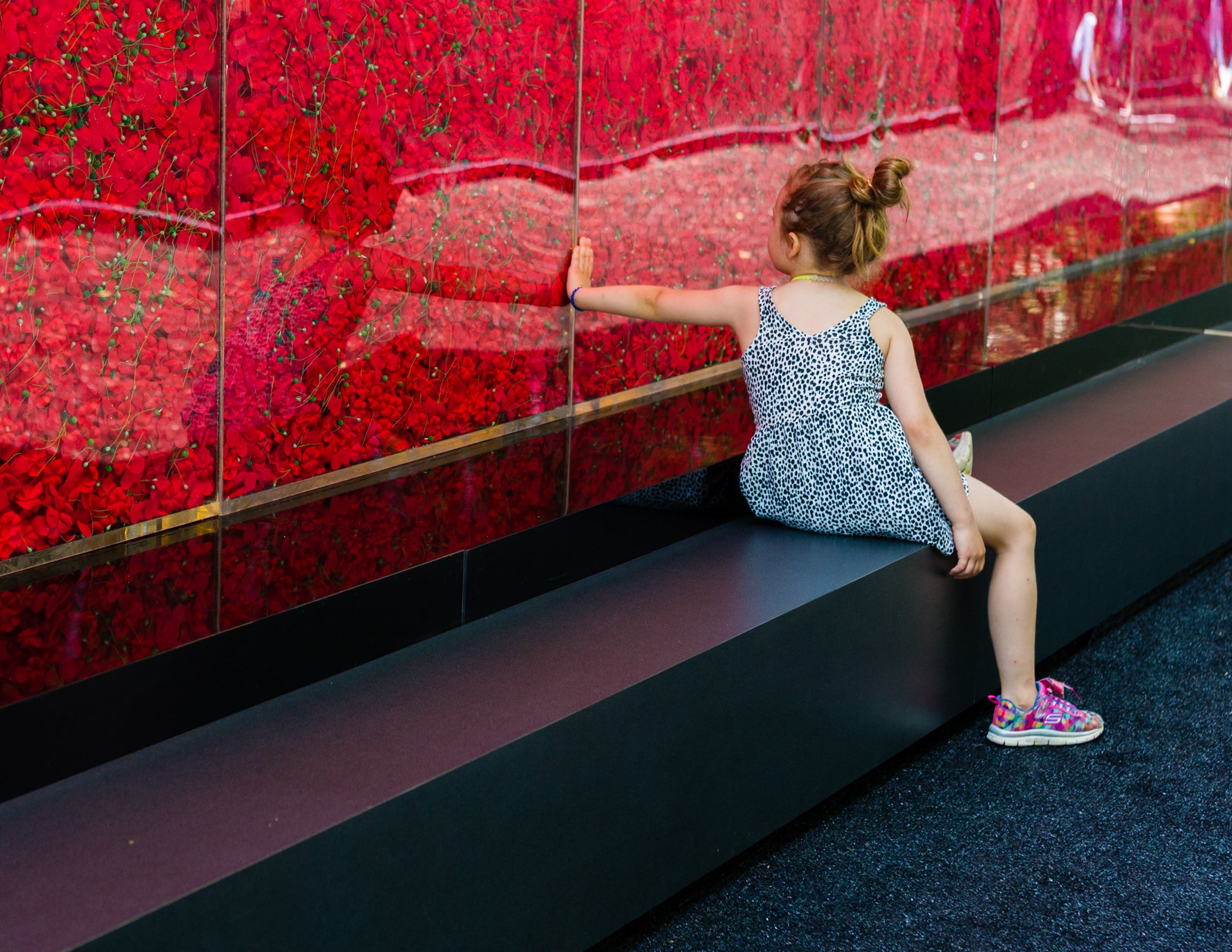 Girl visits The Poppy Memorial, a temporary memorial made by USAA consisting of more than 645,000 poppy flowers, with each flower honoring a fallen military servicemember since World War I, is seen at the National Mall on May 25, 2018 in Washington, D.C. (Photo by Rodney Choice/AP Images for USAA) Photo provided by USAA.

The USAA Poppy Memorial Wall launched in 2018 as a way to honor the more than 645,000 lives lost in service since World War I. Although it remains digital for the second year in a row due to the pandemic, the opportunity to participate in remembering the fallen and their ultimate sacrifice continues.

Eric Engquist is the Vice President of Brand Management for the company and is proud of USAA’s rich 99-year history of serving those who serve. He’s also an Army veteran himself, having served from 1997-2005 after graduating from West Point. Engquist deployed to Kosovo and Iraq as an infantry officer and said, “It’s an honor to work for a company that is so member centric.”

That dedication doesn’t end with those currently serving; it carries through to all who have worn the uniform, even those who are no longer with us. “Oftentimes Memorial Day is just a holiday that’s missed by the average American,” Engquist said. Referencing the frequent special sales, summer kickoffs and barbeques that are more commonly aligned with the holiday, it was important for USAA to encourage a pause, he explained.

The holiday is often confused with Veterans Day. “You hear people thanking servicemen and women for their service on Memorial Day when in reality it is to commemorate and honor the more than 645,000 men and women who’ve died,” Engquist explained.

The poppy flower has been a recognized sign of remembrance for the fallen heroes of World War I since 1918, inspired by Canadian soldier Lieutenant-Colonel John Alexander McCrae’s poem In Flanders Field. McCrae wrote the words after witnessing the red blooms peaking through the broken grounds of the battlefield.

Many countries have since adopted the poppy flower to recognize the 1918 Armistice that ended The Great War. The United States took a different approach and instead, utilizes it for Memorial Day as a way to honor her fallen from World War I and every war since.

In 2018 and 2019 the USAA Poppy Memorial Wall was erected and installed on the National Mall in Washington, D.C. The wall is normally filled with over 645,000 poppies donated by the American Legion.

“The last couple of years we’ve been unable to travel. So, what we’ve continued to do is message the importance of Memorial Day,” Engquist said. “Even though we’ve been tested by the pandemic and all of the social and economic unrest, it’s really a great opportunity this coming weekend to pause and remember those heroes who’ve given so much.”

USAA has made it easy to participate in #HonorThroughAction by creating special poppy Zoom backgrounds, social media filters and even a way to dedicate a digital poppy to a fallen hero on their website. Engquist also encouraged Americans to learn more about the Tragedy Assistance Program for Survivors (TAPS) and to teach their children about Memorial Day.

For Engquist, the somber day of remembrance and reflection is deeply personal.

“As an officer in the Army I’ve counted upwards of 30 or 40 fellow soldiers and service members that I served under, served with or who served under me that paid the ultimate sacrifice since 9/11,” he shared. “As a West Point graduate I also reflect on the more than a dozen classmates that I graduated with who are no longer with us today. So, it’s important and it’s a somber reminder of what it means to be free and the sacrifices that others make so that we can enjoy our lives.”

Engquist shared there’s no higher calling to him than serving one’s country. After leaving the Army, he’s grateful to have found a way to continue to serve. “It’s an equal honor to be able to work for an organization that is so committed,” he said. “This is just a small example of our dedication to those we serve by recognizing the sacrifices of our servicemen and women.”